The Dutch Baby is one of those mysterious culinary misnomers, which is not Dutch and does not involve babies (unless you consider an egg a baby). It’s also sometimes known as a German Pancake, which is only slightly more accurate because the recipe was supposedly inspired by the Pennsylvania Dutch, a group of German immigrants (“Dutch” is a mistransliteration of Deutsch). Confused yet? No worries, because all you need to know is that these are spectacularly delicious!!!

Dutch Baby’s (which my mom inexplicably called “Suzanne’s Pancakes”), were a Sunday morning staple in our house growing up. They’re quick to prepare and make the whole house smell like browned butter, which in retrospect was probably her way of getting her kids out of bed on a lazy Sunday. Mom always served them with Meyer lemon and powdered sugar, or a homemade berry compote, but I decided to take some liberties and combine one of my favorite sweet breakfasts with one of my favorite desserts: Bananas Foster!

With crisp buttery clouds of batter hiding a layer of caramelized bananas in their custardy folds, this Dutch Baby is pretty darned delicious on its own, but the cinnamon caramel sauce and bananas flambéed with dark rum takes this into the realm of orgasmic. Perhaps the best part is that they come together in about 20 minutes. I know… not exactly a busy weekday breakfast, but certainly doable as a weekend brunch, and actually now that I think of it, this would make a pretty amazing dessert baked in ramekins, filled with the bananas foster, and topped with a scoop of vanilla ice cream! 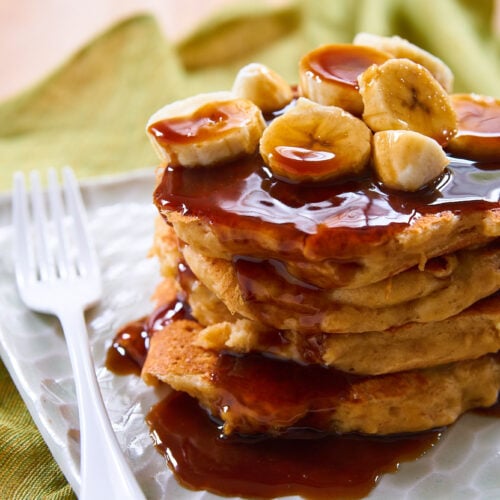