The words “pasty” “gritty” or “dry” should never be used in the same sentence as “hummus” unless you’re using them to describe the hands of the person eating it. That’s why I’m always appalled by the throat-clogging chickpea paste that passes as hummus over here. A good hummus should be soft and velvety, like a half-melted soft-serve ice cream, with a rich nutty flavor that’s offset by a hint of tartness and plenty of pungent garlic. Today I’m going to show you how to make a super creamy basic hummus. Once you have the technique down, you can go crazy with add-ins and toppings to make it your own.

The first trick is to cook the heck out of the chickpeas. Normally, you don’t want the legumes to split open and lose their shape, but in the case of hummus, the shape doesn’t matter and you want them to be as soft as possible. Using a pressure cooker, you can achieve this without presoaking the beans by cooking them for 1 hour under high pressure and then letting the pressure naturally drop. If you want to save time, you can certainly use jarred/canned garbanzo beans, but personally I like cooking them from scratch because you have a chance to introduce some flavor as you cook them.

The next trick is to use a high speed blender to make the hummus. Personally I like using a Vitamix, but other brands of high-speed blenders should work okay. Using a blender also helps you to avoid a mistake that many people make, which is not adding enough liquid to the mixture, because the blender will not spin if you don’t have enough liquid.

As for variations, the sky’s the limit and you can introduce new flavors at one of three points when you’re making hummus. The first opportunity to change it up, is when you cook the chickpeas. At the most basic, I usually add a small onion into the pot, but you can add aromatics like celery and carrots as well as herbs such as rosemary. The nice thing about adding flavor at this step is that you can pick out the herbs to avoid discoloring the hummus, and the time in the pot together helps the flavors meld, so they don’t overwhelm the other ingredients.

The second opportunity to add flavor is to add ingredients to the blender. This could be spices such as cumin or curry powder; herbs such as mint or cilantro; or other things such as roasted peppers or lemon zest.

The last opportunity is to top the hummus with something. Some classic examples are Hummus Ful, in which the hummus is topped with Ful Medames, or Msabbaha in which whole chickpeas are “swimming” in the hummus. I like topping my hummus with things like caramelized onions, pico de gallo, or a tempered oil loaded with whole spices. 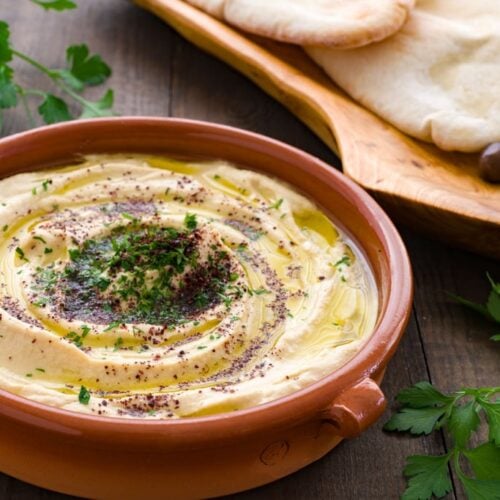 If you have the time to soak your chickpeas overnight, it will work best. Just wash and soak them overnight and add them to the pressure cooker with the soaking liquid, adding enough water to cover the chickpeas by an inch or two. Bring the cooker up to pressure and set the timer for 18 minutes. Let the pressure drop naturally and you should have ultra tender, creamy chickpeas.
Course Appetizer, Condiments & Pickles
Cuisine Best, Middle Eastern
Diet Dairy-Free, Gluten-Free, Low Sugar, Low-Carb, Pescatarian, Vegan, Vegetarian