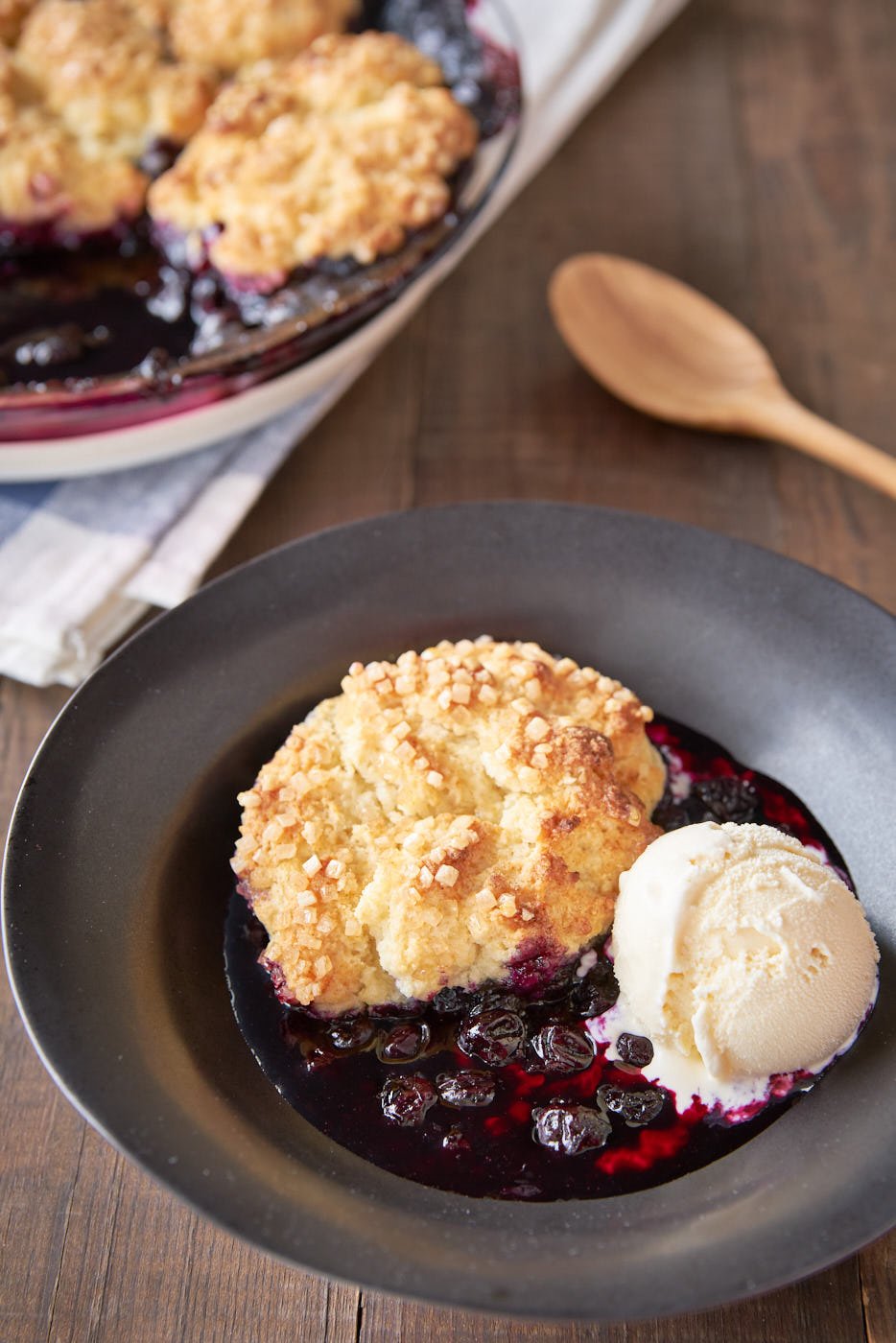 It’s peak blueberry season, and after a recent move, I discovered a pick-your-own blueberry patch just down the street from our house. It’s not big, but with scruffy shrubs that are laden with giant succulent blueberries, it doesn’t need to be. We got a little carried away on our first outing there, and after consuming enough berries that I thought I’d plump up and turn blue like Violet Beauregarde, I decided to turn the rest into this delightful Blueberry Cobbler. 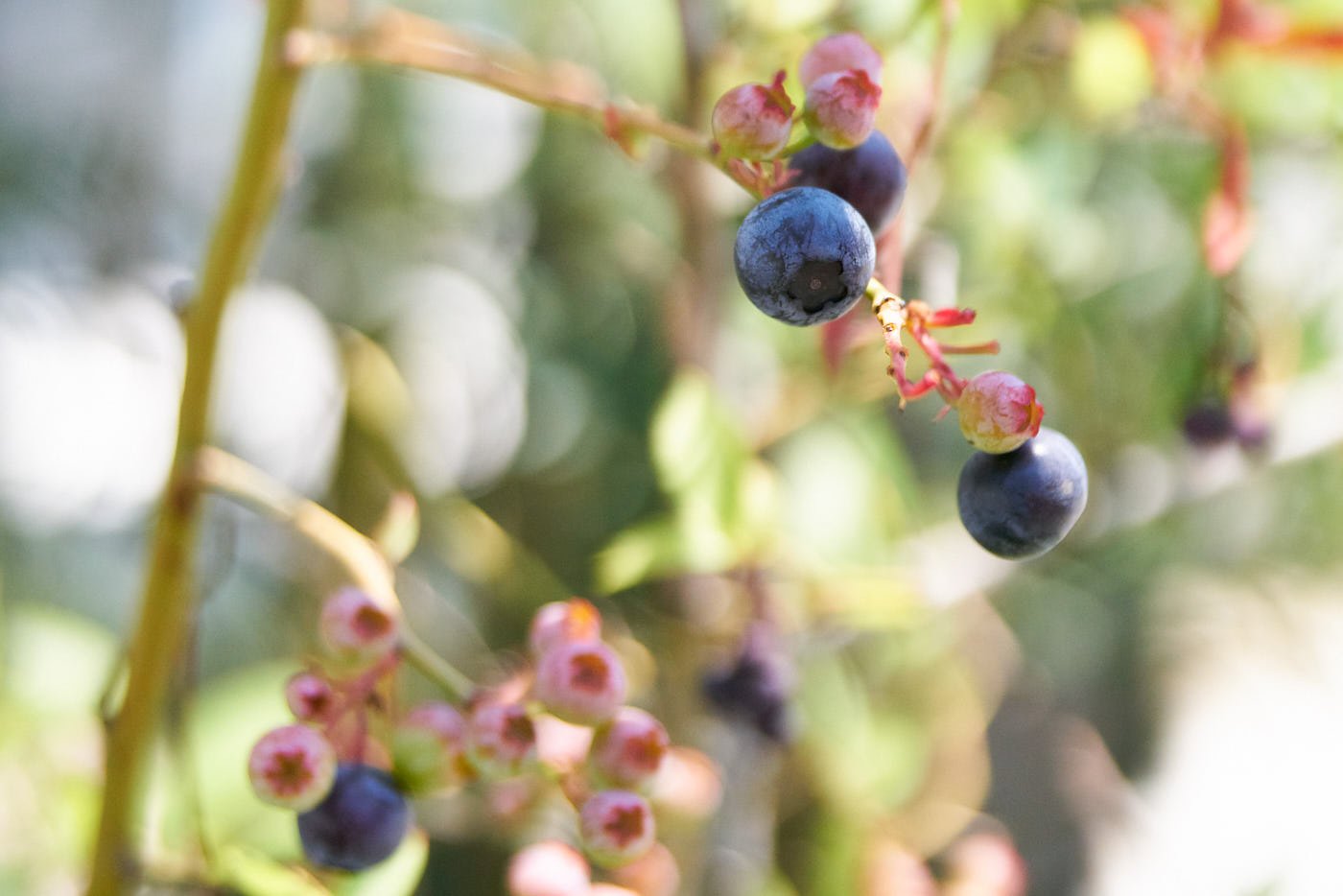 Cobbler vs Crisp vs Crumble

There seems to be a bit of confusion about all the starch topped fruit desserts out there so I thought I’d take a minute to help clear things up.

Blueberries don’t have the most intense flavor, which is why I wanted to figure out a way to concentrate the flavor. The best way to do this is to cook the blueberries down to reduce their moisture content. Unfortunately, cooking them in the oven (especially when they are covered in biscuit dough) doesn’t allow for much moisture to evaporate, so the best you can do is add a bunch of starch to thicken the berries into a biscuit coating preserve. 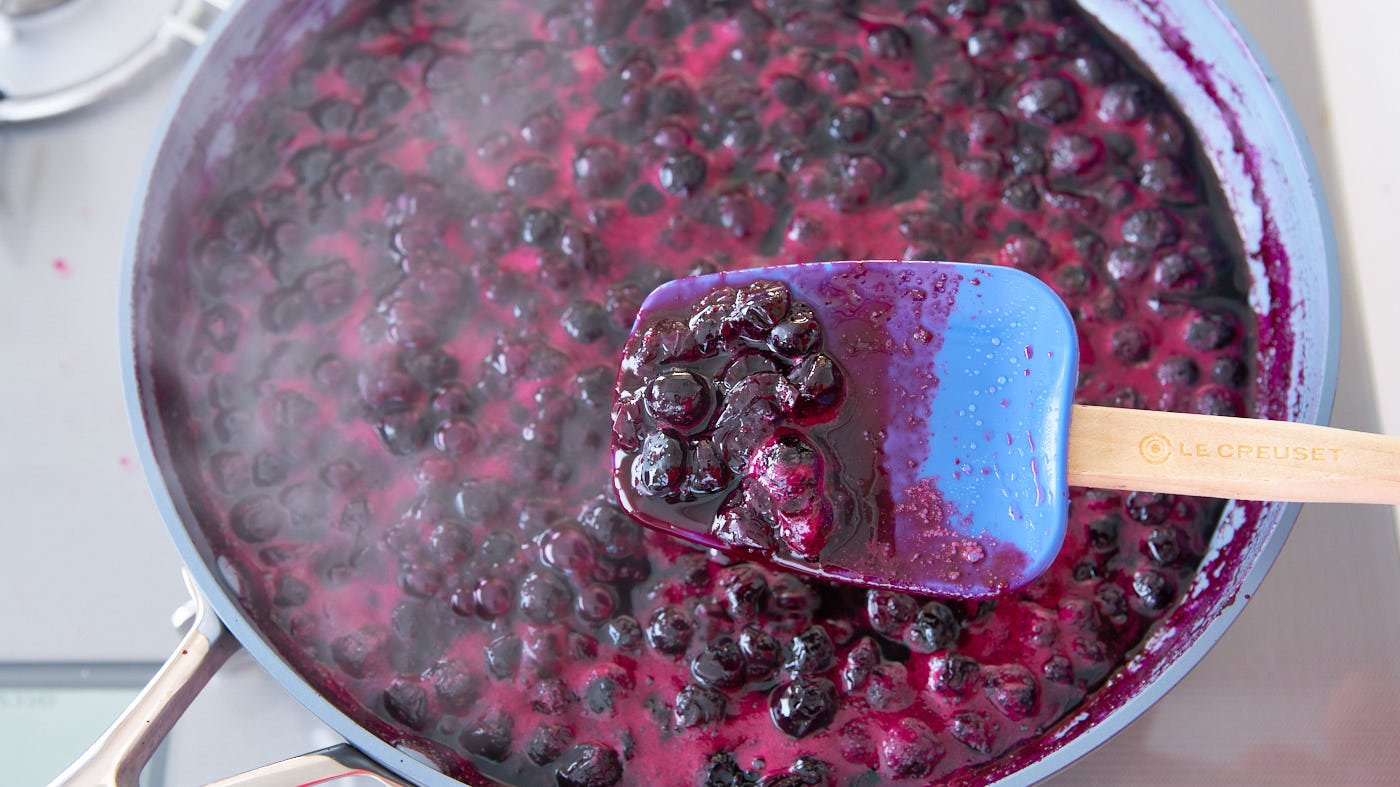 I got around this by precooking the blueberries on the stove. This allows you to reduce the berries by as much as you need to, concentrating their flavor. Because blueberries aren’t particularly tart, adding some acidity to them helps make their flavor pop. I did this by adding lemon juice (along with lemon zest) at the very end.

As for the texture, I prefer my cobbler to have a looser filling which is why I don’t add a ton of starch. If you want a more gluggy filling, feel free to increase the amount of starch to a tablespoon or more. As for the type of starch, I like using potato starch or tapioca starch to thicken cobblers because it doesn’t cloud the fruit juices as cornstarch does.

One of the reasons I’ve never been a huge fan of cobblers is that the biscuits are all too often an afterthought, like a scrap of bread thrown in, to sop up the juices from the fruit. To broadly categorize, most of my cobblers I’ve had have been topped with tough, dense pucks, or a waterlogged and mushy paste.

For my blueberry cobbler, I wanted tender, moist biscuits that are crisp on the outside and yet buttery and light on the inside. In addition to the texture contrast, I also wanted to have some variations in taste. 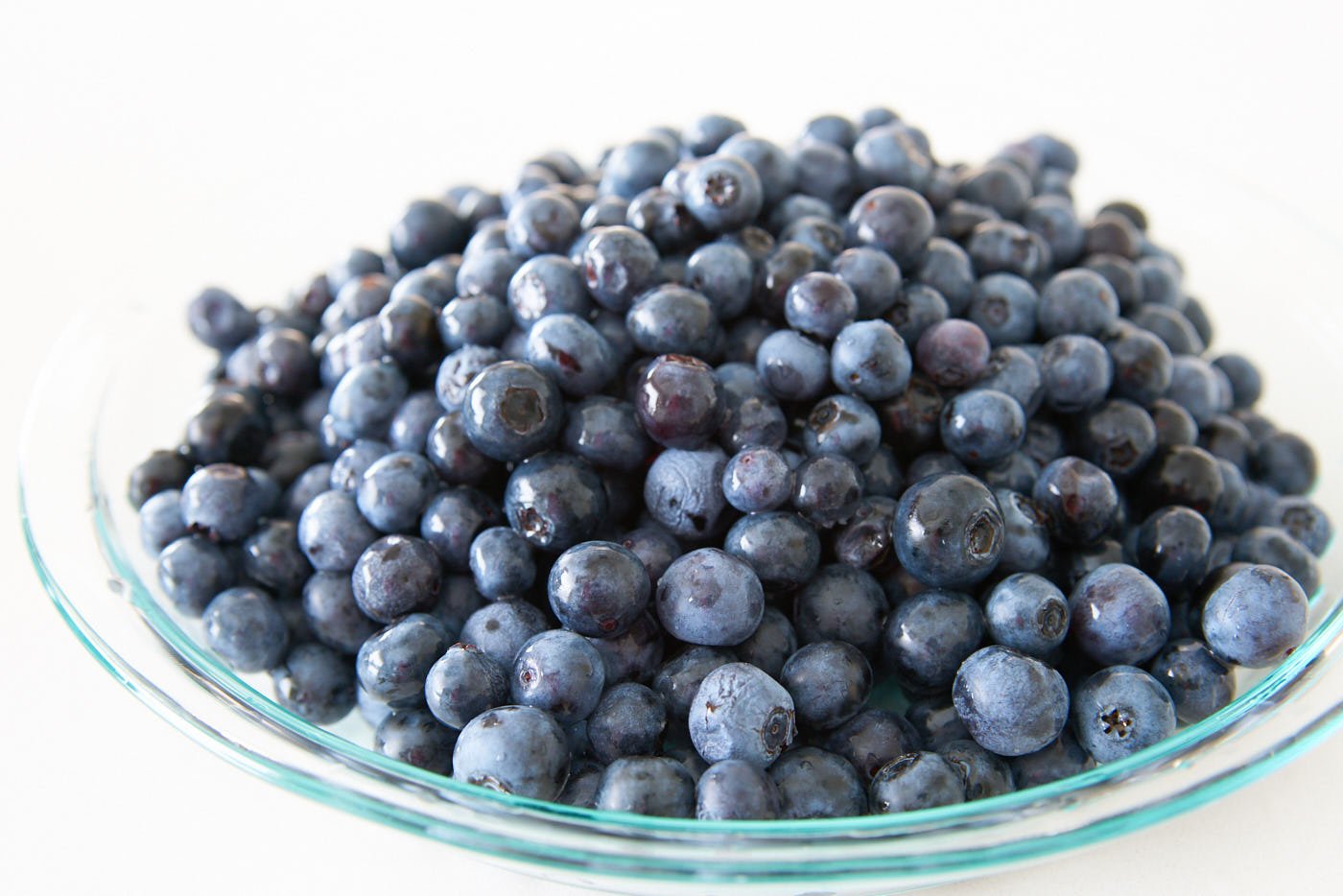 By precooking the blueberries, you get around some of the pitfalls as the filling is viscous enough that it won’t make the topping soggy.

Next, the trick to tender fluffy biscuits, as with most pastries, is to prevent the excessive formation of gluten. To understand how to inhibit gluten formation, you first need to know that gluten is a protein that forms when water is added to wheat flour, and the proteins glutenin and gliadin combine.

Agitating this mixture causes the gluten to form a web-like network, which is why you knead dough for bread and pasta very well. For pastries where we don’t want the formation of gluten, you want to mix all the dry ingredients thoroughly before introducing any liquids. For these biscuits, we first combine flour, sugar, baking powder, baking soda and coarse salt.

Low temperatures inhibit the formation of gluten, as does the introduction of fat which is why the next step is to cut in ample amounts of cold butter into the flour. Then, the mixture is chilled right up until the point when we add our liquid, which in this case is yogurt.

I like using plain yogurt for making biscuits because the acidity reacts with the baking soda to help the biscuits rise. It’s the same reason why recipes often call for buttermilk to be added to pancakes, but I always have plain yogurt on hand. Once you add the yogurt the clock on the baking soda and baking powder starts to tick, which is why it’s important to wait until you’re ready to put the cobbler in the oven to do the final mix. 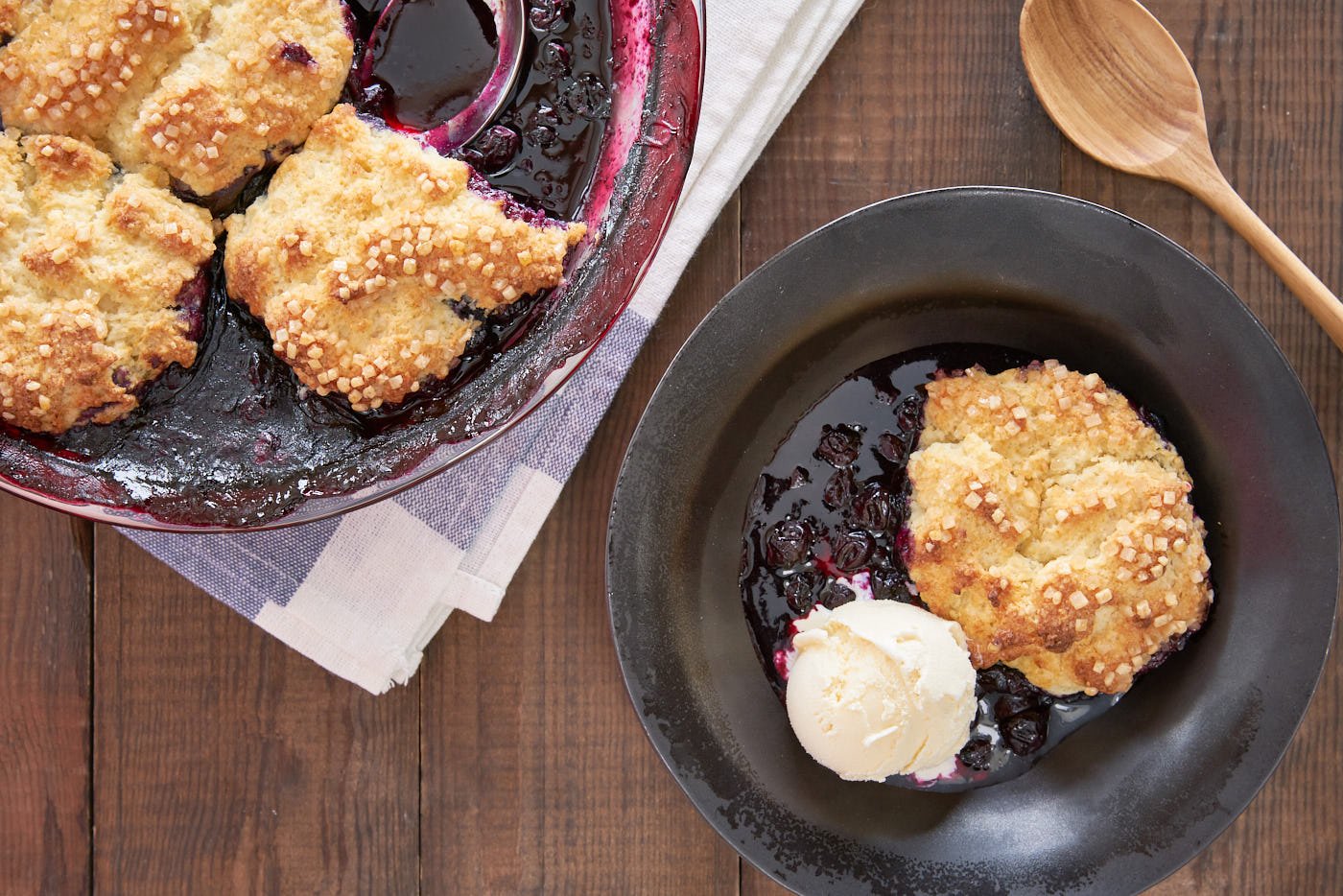 As for the contrasting tastes I mentioned earlier, I like using a medium coarse sea salt such as Fleur de Sel or Maldon in the dough. It doesn’t dissolve completely, which means you get little bursts of contrasting salt as you bite into the biscuit. Then, I roll the finished biscuits in a coarse raw sugar such as Demerara before plopping them into the blueberry filling. The combination provides alternating bursts of salt and sugar that pop in your mouth like fireworks for your taste buds. 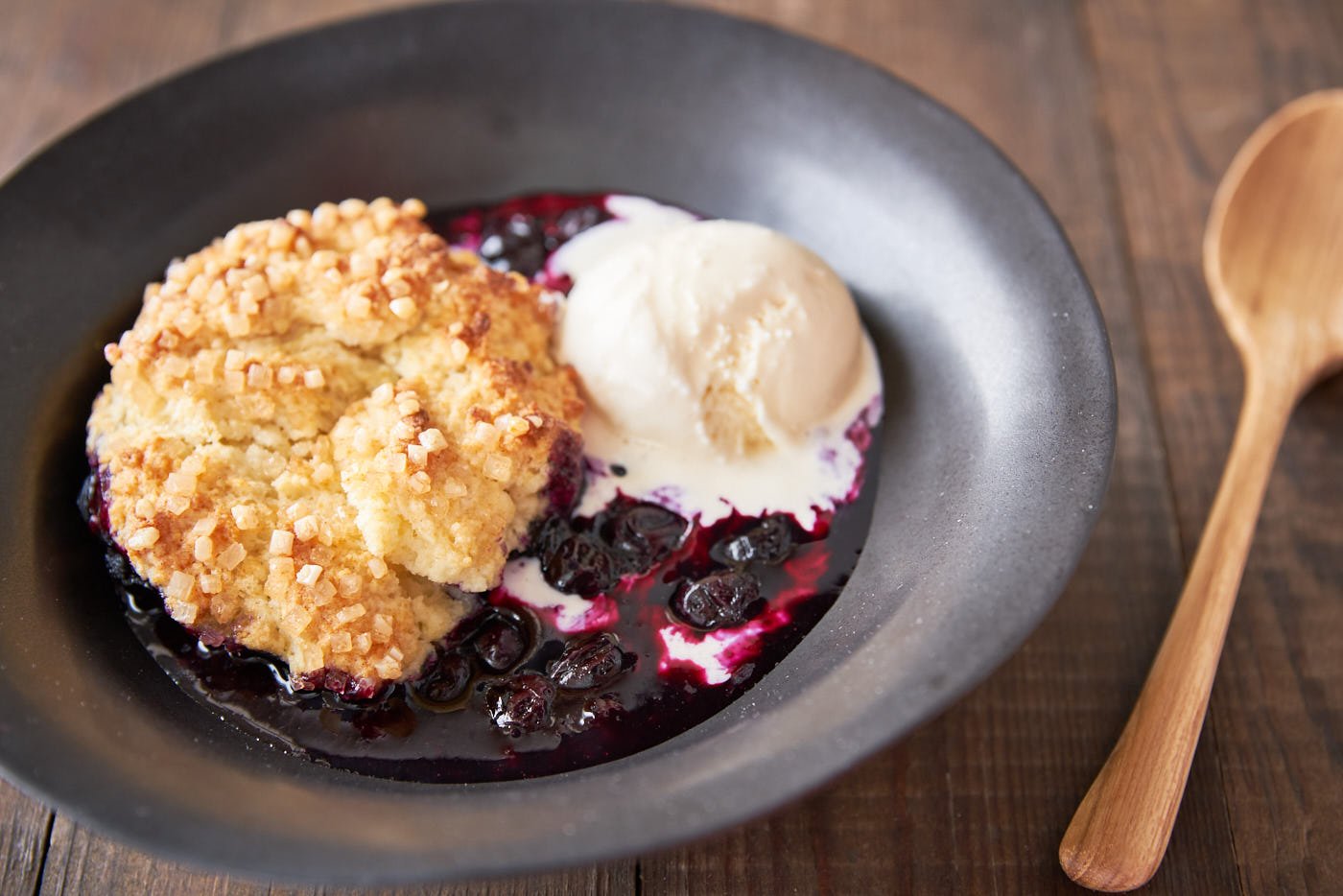 When the cobbler comes out of the over its mouth-scorchingly hot, so I recommend letting it cool for at least 30 minutes before serving it. This also allows the blueberry filling some time to set a bit, so it doesn’t run all over the place. I think cobblers are best served warm, but if you need to make this ahead for some reason, it can be reheated in a microwave for a few seconds (be careful not to overheat it).

In addition to all the texture and taste contrasts of this cobbler, I love adding some temperature contrasts, which is why I serve my warm cobbler with a big ‘ole scoop of vanilla ice cream. If that’s not your thing, then whipped cream or even a glass of milk would work as an accompaniment for this summer treat. 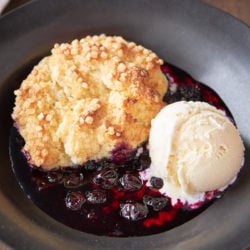