Pork belly is one of those unctuous culinary pleasures that you know will kill you some day, but you can’t resist taking another bite. The magic of pork belly is in the way the fat and meat are distributed; either one on its own would be cloyingly rich or insipidly bland, but layer the fat and meat like an opera cake, you end up with a gloriously moist and tender morsel that floods your mouth with flavor with each bite.

Buta no Kakuni (豚の角煮) which literally translates to “pork cut square and simmered” is the way that pork belly is most often prepared in Japan. Like ramen and gyoza, kakuni has its roots in Chinese cuisine, and this dish in particular started with Dongpo Pork (东坡肉)

As it worked its way from China to Okinawa to Nagasaki, the dish evolved, adapting to local ingredients and tastes. For my version, I like to use dried sardines to add some oomph to the broth while I include some ginger and garlic to smooth over any overly aggressive fish and pork notes. I’ve also changed my method since I first published this dish, preferring to brown the pork belly first rather than just it. This adds complexity to the flavor though if you prefer a lighter dish, just give the pork a five minute boil in water, before adding it to the rest of the ingredients to simmer.

Cooked over low heat for a long period of time, much of the fat renders out, and the collagen breaks down into gelatin making the entire thing dissolve in your mouth on contact. Buta no Kakuni is pretty awesome with some hot mustard and and a frosty mug of beer or sliced up on a bed of hot rice. The braising liquid can be diluted and turned into an awesome broth for for a bowl of buta udon

One of the most important points for this dish is to chose good pork belly. Japanese often refer to pork belly as sanmainiku which literally means “three layer meat”, referring to the quintessential pork belly that has three even layers of meat sandwiched between three layers of fat. This is important because uneven layers upset the balance of the meat and fat, resulting in a kakuni that’s either tough and stringy or excessively greasy. 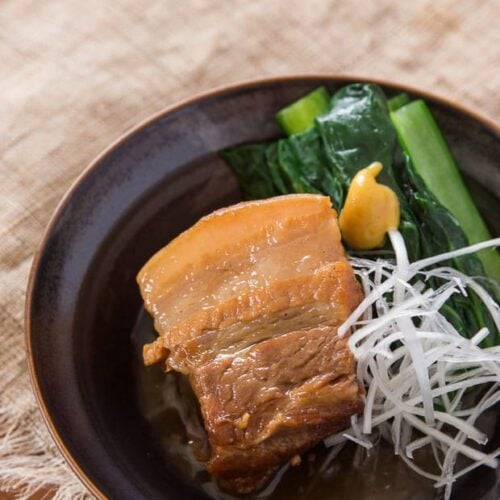