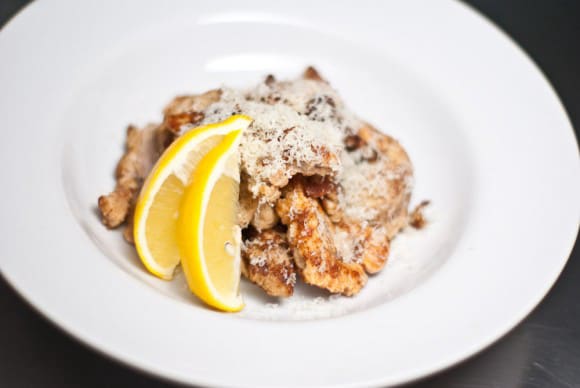 It was below freezing the other day and as I wandered through the sparse Union Square Farmer’s Market, I noticed all the vendors had their normally refrigerated goods spread out on their tables (it was that cold). The only exception was the flower guy, who had all his flowers in his van with the heater running.

There’s a fish monger that’s always there, but I’ve never actually purchased anything from them because it just didn’t seem right to have fish sitting out in the middle of a sweltering New York summer (even though the fish is technically on ice). The ambient temperature on Friday was cooler than what I have my refrigerator set at, so I figured it would be safe to take a peak. It was late in the day and their selection was limited, but I noticed a shallow bowl filled with gorgeous pinkish orange roe tucked away in the very back of their display. “What IS that?” I inquired.

Unfortunately the girl manning the stall wasn’t able to tell me much beyond the fact that it was flounder roe and it’s price. Curiosity perked, I picked up half a pound and brought it home, getting all excited about all the possibilities… Salt cured…. simmered in soy sauce, maybe even Cioppino (an SF classic)…

Alas, it was getting late and I decided the best way to profile the texture and flavour would be a simple preparation so I went for a quick fry in some hot butter, topping it with some smoked sea salt and a nutty cheese.

Fried up to a crisp brown perfection on the outside and a soft crumbly texture on the inside, I took a bite with great expectations. As it turns out, flounder roe tastes exactly like flounder. I felt a little foolish for being so surprised, but there you have it. The texture was a pleasant surprise though. Despite enduring some burns to the face from the spattering butter, the areas where the roe sac had ruptured bloomed into crisp flowers of brown nutty deliciousness that were punctuated by the bits of cherry wood smoked salt and cheese.

It wasn’t quite the mind-blowing delicacy I’d hoped for, but with a glass of wine, fresh baked boule, cheese and caponata, it made for a humble meal I could imagine being eaten in a small cottage somewhere along the Mediterranean.