The first time I had Cacio e Pepe (literally “cheese and pepper”), was after a very long day at work. A co-worker suggested Lupa, his favorite trattoria which was just a few block away. We took a seat under the warm glow of globe lights hanging over the dark wooden counter and my companion suggested the Bavette Cacio e Pepe. I was starving and felt like something more substantial but I acquiesced in the end. The pasta that came out didn’t look like much but under the black pepper flecked pale yellow facade was a pasta unlike anything I’d ever eaten.

With only a handful of ingredients, it may sound a bit mundane, but don’t let the simple ingredients fool you, there’s nothing simple about the taste of this dish. With a nutty creamy sauce bursting with umami and accented by the warm bite of black pepper it’s seductively good in all the right ways. Texture-wise, the pasta is al denté with a firm toothsome bite and the occasional crunch and seething heat from the pepper makes every bite exciting.

Preparation-wise, Cacio e Pepe is a relatively uncomplicated dish to execute: boil the pasta and then toss with butter, cheese and black pepper. But despite its tweet-worthy brevity, your technique will quite literally make or break this pasta. The key lies in the amount of heat applied when combining the ingredients. Not enough heat and the cheese melts and clumps together leaving you with a chunky watery mess. Too much heat and all the water evaporates and the proteins and fat in the cheese separate out leaving you with an oily coagulated mess.

There are generally two methods to making Cacio e Pepe. The first involves mixing the pasta with the butter, cheese and pepper in a bowl and then adding the hot pasta. The second is to combine the ingredients in a skillet. After a lot of testing, the skillet method yielded more consistent results with the key being to work quickly. Taking the skillet off the heat after you’ve added the pasta helps slows things down a bit, but if you still find your pasta oily and sauceless, try adding a bit more pasta liquid at the beginning. Because Pecorino Romano is saltier and has a more pungent aroma, I like sprinkling it on at the end, otherwise the delicate flavor of the Parmigiano-Reggiano gets drowned out.

Although Cacio e Pepe may not be the easiest pasta to master, this is one of those staple dishes that everyone should have in their repertoire because the techniques for making a great Cacio e Pepe apply for almost any pasta dish. 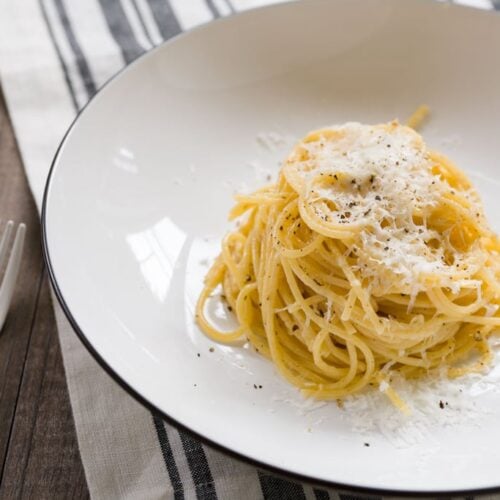