When our friends at method offered to sponsor a post on No Recipes I was thrilled because I love their products. I mean love, as in I’m sitting here sniffing an open bottle of pear ginger dish soap as I type this… Love, as in I pack method products in my suitcase to bring home to Japan every time I’m in the US (method peeps, your products will sell in Japan…. call me). The customs people in Japan are always surprised when they open up my suitcase expecting to find booze, and discover my stash of cleaning products instead.

With a wide pump nozzle that doesn’t clog, and broad base that keeps the bottle from falling into the sink, the dish soap is easy to use and looks great on the counter. It also actually smells like the advertised ingredients! But perhaps the thing I love the most about method’s dish soap, is its magical ability to be tough on grease while being easy on my hands.

It may sound odd to call a dish soap delicious, but that’s how this pear ginger smells, and it’s what inspired me to make these edibly delicious red velvet cupcakes with caramelized pear and a ginger cream cheese frosting. I used beets in the cupcakes for the color (vinegar reacts with the pigments in beets and turns them bright red), but they also add some sweetness (reducing the need for sugar), and moisture, which allowed me to cut back on the butter in the cupcakes without making them dry.

To make the cube of caramel poached pear in the center, I first made a dark caramel, which was then dissolved with some chardonnay. Then, I poached some firm Anjou pears in the liquid, until they were tender. For the ginger I decided to integrate it into the frosting, using a base of cream cheese and butter with some melted white chocolate whipped in. If it sounds rich, it is, but it has a lot less sugar than most frostings, which lets you put a lot more onto each cupcake without making it cloyingly sweet. The ginger also helps balance out the richness, imparting it’s wonderful fragrance with just a hint of heat to cut through the fat.

If this sounds like an epic baking project, it was, which made it perfect for the cue I was given by method: to Fear No Mess. I guess the marketing gods must have been smiling down on my kitchen, because the day before I’d planned to start testing this recipe, my dishwasher decided to head to the big kitchen appliance retirement home in the sky. The untimely demise of the dishwasher left me with nothing but my hands, water and a bottle of method to tackle the copious bowls, pots, pans, spoons, spatulas, whisks, mixer bowls and food processor parts that I’d used to make these cupcakes.

But that wasn’t the worst of it. While shooting process shots, I tripped over my tripod, sending my camera lens-first into a tray of cupcakes that were just about to go into the oven. With the remains of my fuschia cupcake batter splattered all over the kitchen, I started over, adding to the mess.

But don’t let the effort or my crazy pile of stuff in the sink scare you, these cupcakes are SCRUMPTIOUS and were absolutely worth the cleanup, so fear no mess and go make a batch of these these red velvet cupcakes today! 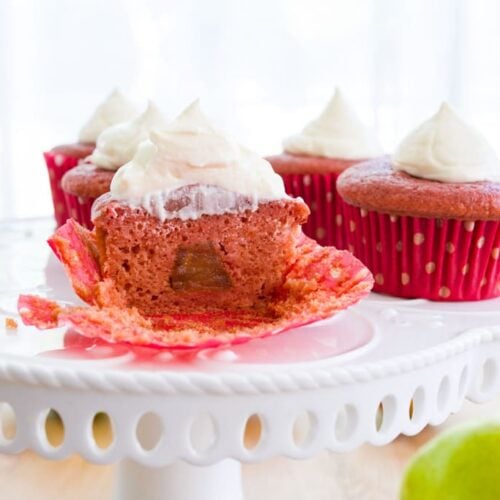 *NOTE: The measurement for beets is after they’ve been roasted and peeled (they’re sold roasted in many grocery stores). If you are roasting them yourself you’ll need about 450 grams of beets. P.S. This post was sponsored by our friends at method, but as always, the opinions expressed are my own.
Course Dessert
Cuisine American
Diet Pescatarian, Vegetarian