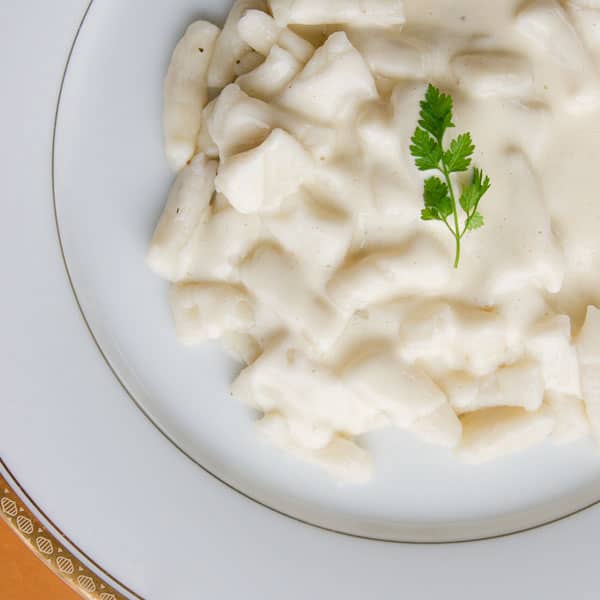 I love gnocchi. Not quite a dumpling, not quite a pasta it defies categorization and is made in about as many ways as there are people who cook it. Unfortunately, it’s one of those Italian dishes (like Tiramisu) that skyrocketed to fame in posh American restaurants during the 1990’s and has been so overdone (and overdone poorly at that), that it’s become a bit of a cliché.

Often gluey, starchy, or just plain chewy, I started to forget all the reasons why I fell in love with the little potato dumplings all those years ago. As a result I can’t remember the last time I ordered it. That is, until I recently had it at an Italian restaurant in Singapore.

I’d just finished a 7 course seafood meal at a Chinese restaurant and was onto my second dinner, which included a salumi platter and a whole pizza. A plain white dish with cream colored gnocchi covered in a cream sauce appeared at the table. It didn’t look all that appealing, but the aroma was so seductive, my hand went for my fork and before I knew it I had a piece of gnocchi in my mouth.

Each ropy morsel, about the width and length of a piece of macaroni was tender, and yet had more bite than a chunk of mashed potato. Despite the plate’s homely appearance, the texture and flavor of this dish was phenomenal. It reminded of the reasons I fell in love with gnocchi in the first place.

I later learned from the chef that his secret was to use as little flour as possible when making the gnocchi. I knew right then and there that I’d have to try my hand at it as soon as I got home.

About a week later, I found myself at home, searching the fridge for something to eat. There was a block of Gruyere cheese and lots of Japanese taro, but no potatoes. Unlike in other parts of the world, the Japanese use only the small tubers that form off the main corm of the taro plant. It has a distinctly slimy texture when cooked, which puts many people off, but it’s a nutritious vegetable with a wonderfully smooth texture.

Party fueled by laziness, and partly fueled by curiosity, I started to wonder if it would be possible to make gnocchi using taro instead of potato.

As it turns out, taro makes excellent gnocchi! I may even go so far as to say I prefer it to gnocchi made with potatoes. Since taro lacks the gritty texture that potatoes often have, the texture is satiny smooth. Fortuitously, the sliminess is also wrangled in by addition of flour. The resulting gnocchi, has a mouthfeel that’s smoother and lighter than regular gnocchi, and yet it has a marvelous texture that’s like biting into a cold piece of Brie.

For the sauce, I went with the Gruyere that I had in the fridge, but you could just as easily make it with Gorgonzola, or another flavorful cheese that melts. Tossing the cheese in cornstarch before adding it to the cream keeps it from clumping and it also helps thicken the sauce. This sauce is a lot less work than making a bechamel, and in my opinion, it turns out smoother.

The only thing I could think of that would make this better would be to shave some white truffles on top. If you want some more texture, you could also toast some bread crumbs in butter or olive oil and sprinkle them on top.

What do you think?25 Cancel reply