Chicken Biryani is a savory chicken and rice dish that includes layers of chicken, rice, and aromatics that are steamed together. The bottom layer of rice absorbs all the chicken juices as it cooks, giving it a tender texture and rich flavor, while the top layer of rice turns out white and fluffy. Buried in the Biryani, you’ll find whole cuts of succulent chicken bursting with flavor from the potent array of spices, herbs, and aromatics it’s marinated in.

Whether you’re talking Arroz con Pollo, Hainanese Chicken Rice, or Oyako Donburi, chicken and rice is a classic pairing that has permeated culinary culture around the world. It makes sense that earlier in human history, this staple grain would be combined with a domesticated source of protein. Still, the fact that this combination has endured as a popular favorite today, speaks to its unassailable deliciousness.

For my Chicken Biryani recipe, I’ve simplified the preparation a bit by marinating the chicken in a spicy mixture of garam masala, garlic, ginger, chili peppers, coriander leaves, and garlic. When fried, the spices and aromatics on the exterior of the chicken caramelize into an insanely flavorful crust. I like to make the fried onions separately, as it allows you to fully caramelize them into a sweet umami-packed layer that contrasts the spicy, savory chicken. For the rice, a quick par-boil with whole spices like cardamom, bay leaves, and cumin infuses some flavor, while ensuring the rice is tender enough steam after the Biryani is assembled.

What is Chicken Biryani?

Although widely associated with Indian cuisine, Chicken Biryani is a dish that has spread across a wide swath of South Asia, reaching as far west as Iraq and as far east as Indonesia. The vast geographical area Biryani calls home has resulted in a wide variety of preparations and ingredients; however, it is typically prepared by layering seasoned chicken with rice and aromatics and steaming them together.

What does Biryani mean?

The name Biryani is thought to be derived from the Persian word birinj (برنج‎) which means “rice”.

What do you eat with Chicken Biryani?

I like to serve my Chicken Biryani with cooling raita made with yogurt, mint, cilantro, and a pinch of salt, but this is also good with a variety of different chutneys. I know it’s a lot of carbs, but I also love serving biryani with a basket of fresh pillowy naan, my friend Bee over at Rasa Malaysia has a fantastic Fail-Proof Naan recipe that I’m a fan of.

What’s the difference between Biryani and Pulao

Pulao (a.k.a. Pilaf), is also a rice dish that can be found in similar regions of the world as Biryani. While there’s some debate as to the difference between Biryani and Pulao, the latter tends to have less meat and veggies relative to the rice, which means it’s usually served as a side rather than an entree. The second big difference is that Biryani is generally layered and steamed, which creates a wonderful variation in flavor, texture, and color when mixed together. 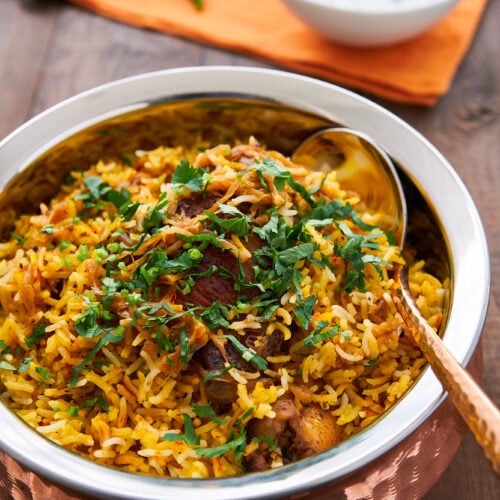 What do you think?66 Cancel reply