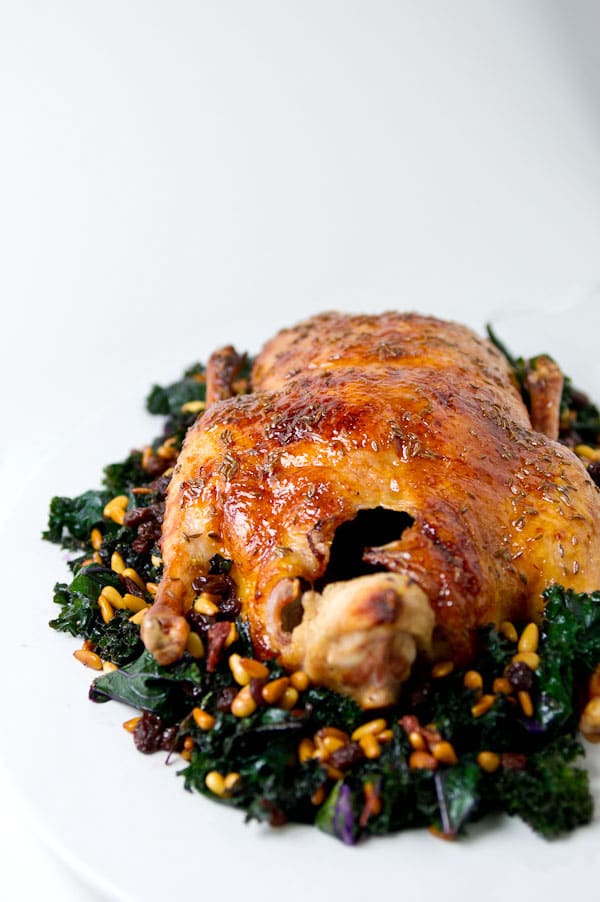 Duck is like the pork of poultry, it has such great flavor and there’s almost nothing better than the skin crisped up. It’s my favorite bird to roast, and yet it’s perhaps the trickiest to do right. “Right” in my book is a whole bird with tender moist meat, a minimal amount of sub-dermal fat and a thin crispy skin coated in a sweet caramelized glaze.

To achieve a crisp skin, some recipes call for cooking the duck at a high temperature for an inordinately long time. While they do indeed produce wonderfully crisp skin, the drumsticks end up like duck jerky and the breasts become chalky and dry. Other recipes have you steam the duck then cut it up, roasting the legs and breasts separately. This works a little bit better as you can remove the breast meat earlier, but to me, this is not a roast. If you’re going to cut the duck up, why not just confit the legs and pan sear the breast?

I wanted a real roast that showed up at the table in one piece with succulent breasts, tender legs, and a crispy glazed skin. Most importantly, it’s a roast, so it had to be simple, without involving culinary acrobatics or acts of God to create. Desperate for a miracle, I hit up the omniscient Internet, only to be disappointed by the lack of good solutions.

In the end I decided to do what I do best: ignore all the rules and make up my own. When it comes to duck, conventional wisdom, like bringing the roast up to room temperature, works against you. Another counter-productive “rule” about roasting poultry is to avoid obstructing the entrance to the body cavity so hot air can circulate inside the bird. Both these result in more even cooking, which is desirable with most roasts, but in the case of duck, you want it to cook unevenly.

To understand this, you have to think about the anatomy of a typical Long Island duck. Between the skin and the meat, there is a very thick layer of fat. The best way to get rid of the fat (and crisp the skin in the process) is to cook it at a high temperature until the fat is rendered out. The problem is that the amount of time it takes to render out most of the fat is far too long for the meat underneath. That’s why you want the duck to cook faster on the outside than it does on the inside.

By chilling the duck and sewing up the body cavity, the outer layer (i.e. the skin and fat) gets very hot, while the meat underneath takes a lot longer to heat up. This means you get the fat rendered out, the skin crispy, and your breasts comes off the roast a lovely shade of pink.

The one other problem I have with most roast duck recipes is that they have you drain the fat every 30 minutes. It’s considered a necessary step, otherwise the oil gets too hot and starts to smoke. The problem is that it’s messy, dangerous, and a big hassle. I’ve found that by continuing to add water to the pan, it keeps the temperature of the accumulating oil low enough that it does not smoke. At the end, you can still save the wondrous duck fat for other uses by pouring it through a tea strainer. You’ll have some liquid under the fat, but it doesn’t matter because it will separate, and the fat on top will harden in the fridge. You’ll get a few cups of fat and about a cup of concentrated duck juices by doing this, both of which can be used for something else.

This is optional, but you can brine the duck first in a solution of water, sugar and salt. Click here for a brine recipe. This will flavor the meat all the way to the center. 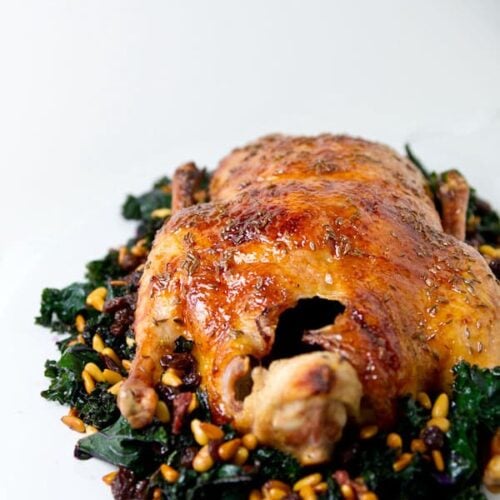 Tip: If you want to keep the fat, just let it cool a little bit, then pour the fat and any remaining water through a tea strainer into a tall container (such as a pyrex measuring cup). Cover and refrigerate until the fat has separated and solidified. Now you can scoop off the fat and use it to fry potatoes (or just about anything you want improve the taste of. The concentrated roast duck stock at the bottom can be used to make sauces, or tastes great added to soups and stews.
Course Entree
Cuisine Eastern European
Diet Dairy-Free, Gluten-Free, Low-Carb