I really hate liver, or at least I thought I did. It’s long been one of the only foods I didn’t like. Something about the chalky texture and minerally flavor really turned me off. But I have this rule. I make myself try things I know I don’t like from time to time with the hopes that 1) my tastes may have changed 2) it’s just been prepared wrong all this time. Fennel is a great example of the former and I can now say that liver seems to fit in the second category.

Last summer I was hanging out at Radegast Hall Biergarten in Williamsburg (one of my favorite places for beer and meat in NYC) when my sense of adventure got the best of me, and I ordered the rabbit and chicken liver pâté. I’m sure the two Maßkrug of beer helped lubricate my gullet (and mind) for the fist bite, but upon slathering a liberal smear of pâté on my bread and taking a bite, I was overwhelmed with a feeling I’d never had before while eating liver: I didn’t hate it! The second bite confirmed that it was in fact tasty, maybe even delicious?!

While cleaning out the freezer the other day, I uncovered a few frosty scraps of foie gras. Far too old to sear, and not enough to turn into a terrine by itself. Still, it felt like a waste to toss them out, so I decided to confront my liver aversion once and for all and make a pâté that could put an end to this long-standing cold war between liver and I. Rather than make a Pâté de Campagne, which is usually a mixture of meat and liver, I decided to go whole hog (or whole liver as it were) and make a pâté that was 100% liver.

We all know that foie gras doesn’t really count as liver (more like a slab of savory butter), so I bought a pound of chicken livers to make the foundation for the pâté. The foie gras went in for creaminess and fat. In theory you should be able to use butter or duck fat and get similar results. I also wanted something to cover-up that liver flavor. Whether it’s goat or lamb, there’s no better way to cover up a funky meat than to add garlic and curry powder. Since I was going “Indian” with the spices, I also decided to throw in a little mango chutney for sweetness.

Lastly, since I wasn’t going to be adding any pork, I needed a way to infuse a ton of umami into an organ that’s not especially flavorful by itself. This came in the form of caramelized shallots, and my magic ingredient: kombu dashi powder. It’s powdered kelp extract used for making Japanese soup stock, and is a way to instantly boost the flavor of just about anything without resorting to the use of MSG. You can find it at most Japanese groceries, but be sure to read the translated label as many of them contain MSG.

All this got blitzed in a blender until the mixture looked like a smoothie. After pan frying a little pancake of pâté liquid and deciding that the flavor was good to go, I strained it through a very fine mesh strainer to remove any bits that might ruin the texture. Then, I decided to steam it in a crock rather than bake it in a double boiler. My thought was that it would cook faster and more evenly while keeping the texture nice and smooth. I finished it off the traditional way, with a weight on top, and left it to chill in the fridge overnight. This eliminates any air bubbles and gives it a nice dense texture.

The result was a pâté that had the texture of cream cheese, the flavor of a good meaty curry, and a richness that was somewhere between cheese and butter. It struck a nice balance between sweet and savory and when spread on crostini, it made me realize that liver ain’t all that bad after-all. 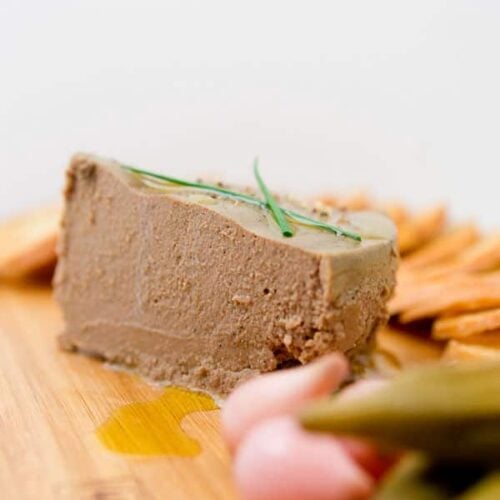