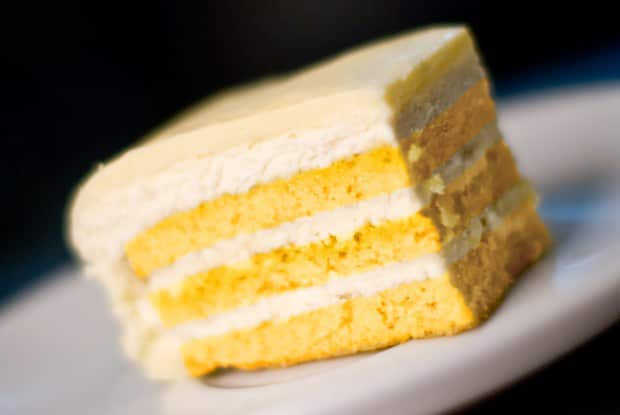 For the past two months I’ve watched Tastespotting fill up with Daring Baker’s Challenge photos towards the end of the month. Last month, curiosity got the best of me and I decided to join. When the May challenge was revealed, I was both excited and horrified by the challenge… to bake an opera cake.

If I remember my French correctly “l’opera” means “delicious pain in the ass”. It involves layers of an almond meal based cake called joconde soaked in a flavoured syrup with buttercream sandwiched in between each layer, topped with a mousse then covered in a chocolate glaze. Lost yet? The recipe reads like a Russian novel circa Leo Tolstoy, and it will probably take a normal person 2 days to make this.

That said, it tastes like heaven and your friends will love you if you bring it to their BBQ. I’ll admit I’ve always been curious about how these were made, but like with croissants, I’ve always just paid a real pâtissier to bake one for me. It’s now clear to me why a small slice is so damn expensive. Beyond the labour, I spent close to $40 on just the ingredients.

Those who are frequent readers know my aversion to following recipes which made this challenge doubly challenging, but I managed to get through it as written, fighting spastic urges to sprinkle some additives the whole way through. I was allowed the change the flavourings for the syrup and buttercream, so I decided to go with a ginger turmeric syrup for some spicy fire and a cool peppermint buttercream for the ice. It may sound a bit strange, but the two flavours play off each other in a very pleasing way.

If I were to ever make this again there are some changes I would make (which weren’t allowed for the challenge). At the top of the list would be to include powdered ginger and turmeric in the joconde itself as glazing it with flavoured syrup wasn’t enough. I’d also probably double the amount of mousse so I could eat half of it straight out of the bowl (yes, it was that good).

I’m not sure if I’m going to continue on with this Daring Bakers business, but I am grateful for the opportunity to workout my atrophied baking muscle.

Because of the lack of ginger turmeric flavor, the cake was more icy (from the peppermint) than firey, but I’m sure including ginger and turmeric in the cake would rectify that problem. Beyond that I’d say this cake is moist, rich, creamy and delicious (in a “I just went to Paris and picked this up at Dalloyau” kind of way).

This recipe is based on Opera Cake recipes in Dorie Greenspan’s Paris Sweets and Tish Boyle and Timothy Moriarty’s Chocolate Passion by way of this months hosts, Lisa and Ivonne, as well as Fran of Apples Peaches Pumpkin Pie and Shea of Whiskful. This month’s challenge is also dedicated to Barbara of Winos and Foodies, home of A Taste of Yellow, a food event supporting LiveSTRONG.

for the ginger turmeric syrup

for the peppermint buttercream

for the white chocolate mousse

What do you think?72 Cancel reply