Since posting my recipe for the Best Chicken Parmesan, I’ve been getting tons of requests for my version of an oven-fried Eggplant Parmesan. It might sound like a simple substitution, but eggplants are quite different from chicken and so it’s not as simple as swapping out the chicken for eggplant. To understand how we need to change the recipe to work for eggplant we first need to understand how eggplant differs from chicken.

Eggplant has a spongy porous texture, which makes it great for absorbing flavors, but when it’s deep fried, it also tends to absorb frying oil like a mop. The thing is, it’s that absorption of oil that gives the eggplant a marvelous creamy texture and rich taste. Thats why baked eggplants tend to end up dried out and chewy, or spongy and watery.

This fundamental problem is what’s kept me from doing an eggplant parmesan recipe sooner. But recently, while working on another recipe, I realized that if I soaked the eggplant in enough oil before roasting it, it turns out just as tender and creamy as a fried eggplant.

The next problem was that I envisioned my eggplant parmesan having thick steak-like rounds of eggplant. But when you slice the eggplant too thick, it tends to release a lot of water while cooking, leaving the breading soggy. To avoid this, I salt the pieces first, to coax out the excess water. This also has the added benefit of seasoning the eggplant to the core.

After being salted and squeezed, the eggplant needs to literally be bathed in olive oil before going through the flour, egg, breadcrumb routine. This allows enough oil to soak into each piece of eggplant so that it has the creamy consistency of fried eggplant.

Since we’re soaking the eggplant in oil, you may be wondering why I don’t just fry it. Well, if you’re anything like me and hate cleaning up the splattered mess that deep frying leaves, that alone should be reason enough, but if you’re still not convinced, I’m fairly certain deep fried eggplant is going to absorb a heck of a lot more than three tablespoons of oil.

Like croutons in a bowl of French onion soup, this eggplant parm has a crackling crisp crust of bread and browned cheese on top, a tender flavorful bottom, and a rich velvety disc of eggplant in between. I like using a meat sauce for this dish because of the extra flavor it adds, but if you want to make this vegetarian, just swap out the sauce portion of this recipe for my basic tomato sauce 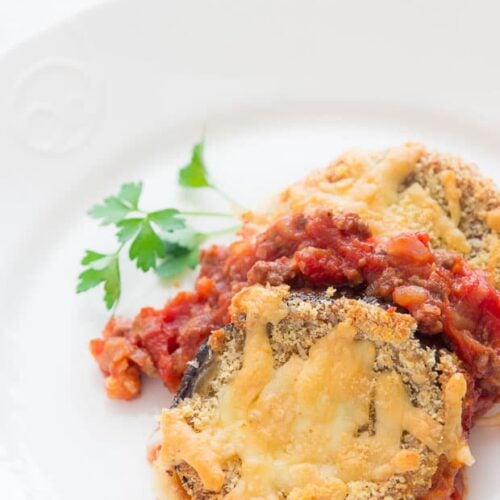