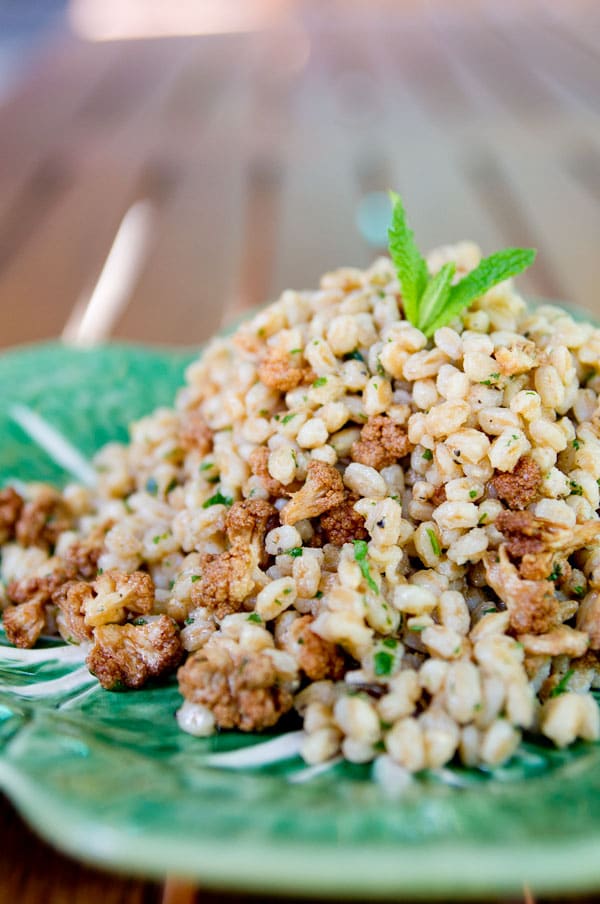 As much as I love cooking, there are times (especially in the dead of summer), when the kitchen is the last place I want to be. That’s why I love having salads like this farro and roasted cauliflower salad in the fridge. It just gets better over time, so you can make a large batch, and it’s there to rescue you from hunger when you need it.

While I have nothing against meatless/cheeseless dishes, I often find that they lack flavor. That’s why it’s important to fully develop the flavor of each ingredient that goes into a vegan dish. Roasting the cauliflower in this case intensifies its mustard notes, sweetens it, and brings out a robust aroma that happily compliments the nutty farro.

Unlike most dishes that call for truffle oil, it’s in the dressing only to lend the faintest hint of mustiness without stealing the spotlight from the other ingredients. The sesame oil might sound like an odd addition, but there’s not enough of it to make it taste Asian, and it does a great job of tying all the earthy components together.

This salad makes a wholesome snack, but it also makes for a great meal. Just toss the extra dressing with some greens and add in the farro to give the salad some substance.