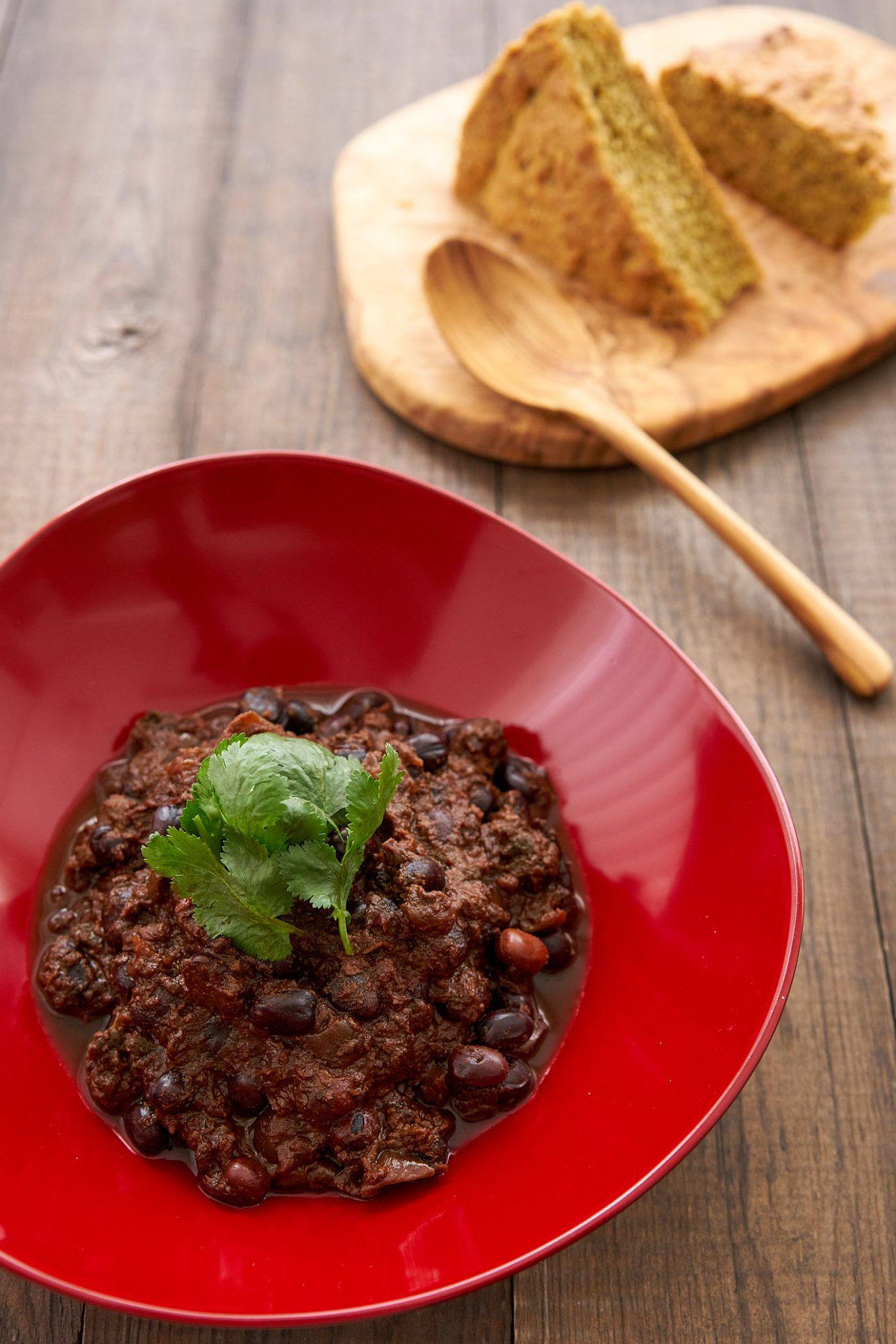 Although we’re rapidly approaching the first day of spring, there have been a spate of drizzly near-zero days over here. It’s the kind of damp penetrating cold that makes old injuries ache and it’s on days like this that I crave a steaming bowl of hearty chili.

I know a lot of people have firm beliefs on what “chili” is or isn’t, but for me, chili isn’t so much a specific dish, as much as a class of dishes, like curry or stew. That’s why I have a repertoire of red chilies, white chilies, and green chilies, each one with their own variations.

This time, I felt like doing something a bit different. I’d originally set out to make a black chili with black beans, but it appears my pantry got hungry and decided to eat the bag of black beans I could have sworn I bought. Instead, I found a sack of Middle Eastern fava beans (sometimes labeled “ful”), which are most commonly used to make ful medames. 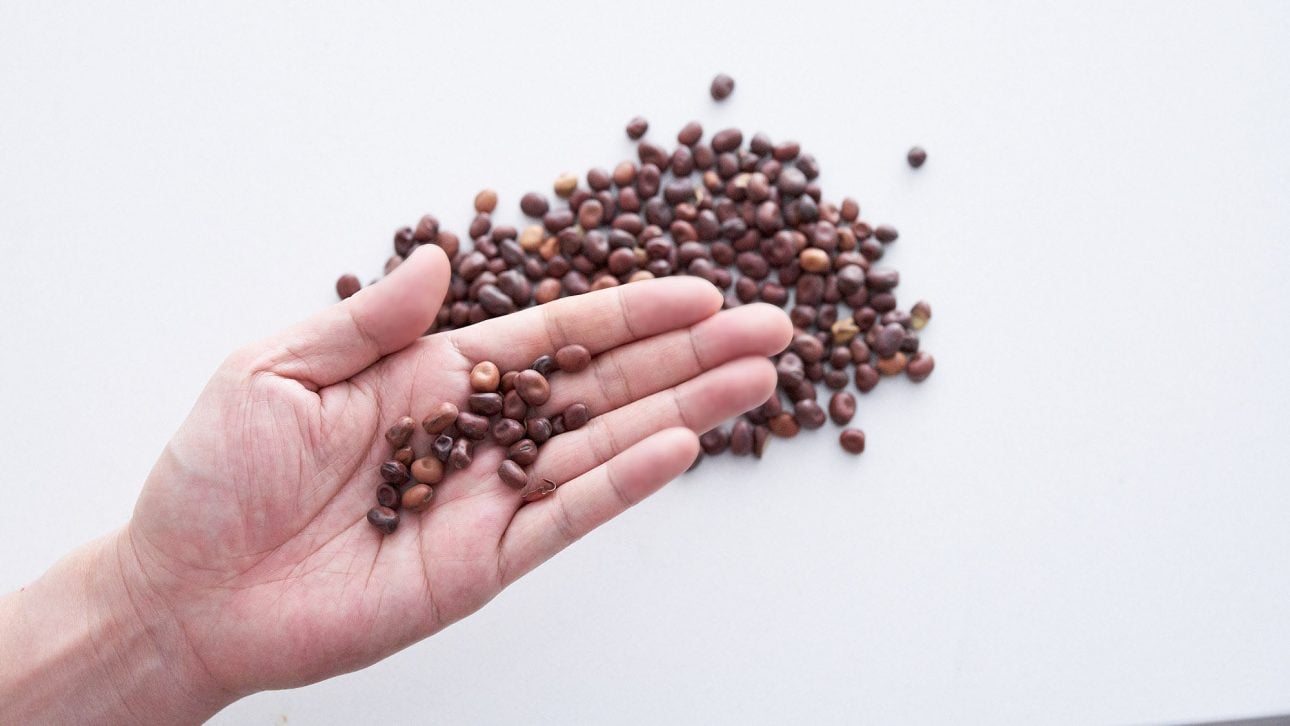 They’re different from the large greenish brown fava beans most commonly found in the US, and when cooked, they’re tender and incredibly flavorful. I’m not sure if the difference has to do with the cultivar of fava, or when it’s picked, but the Middle Eastern variety are much smaller and rounder than the western ones (which tend to be large and flat) with a darker brownish-red hue.

The reason why this distinction is important is because western fava beans must be peeled as the skins of the larger beans are so tough that the inside of the beans will turn to mush before the skins soften. If you can’t find the smaller fava beans at a store near you, you can substitute other similar sized beans such as pinto, cranberry, or navy beans.

Because I’m always looking for ways to cut back on the meat I consume without compromising taste, I decided to try making this chili with mushroom “meat”. It’s basically mushrooms that have been minced in a food processor. It ends up taking on a similar color and texture to ground meat. I also increased the amount of aromatics such as garlic, onions and peppers, and char-roasted them before adding them into the chili. 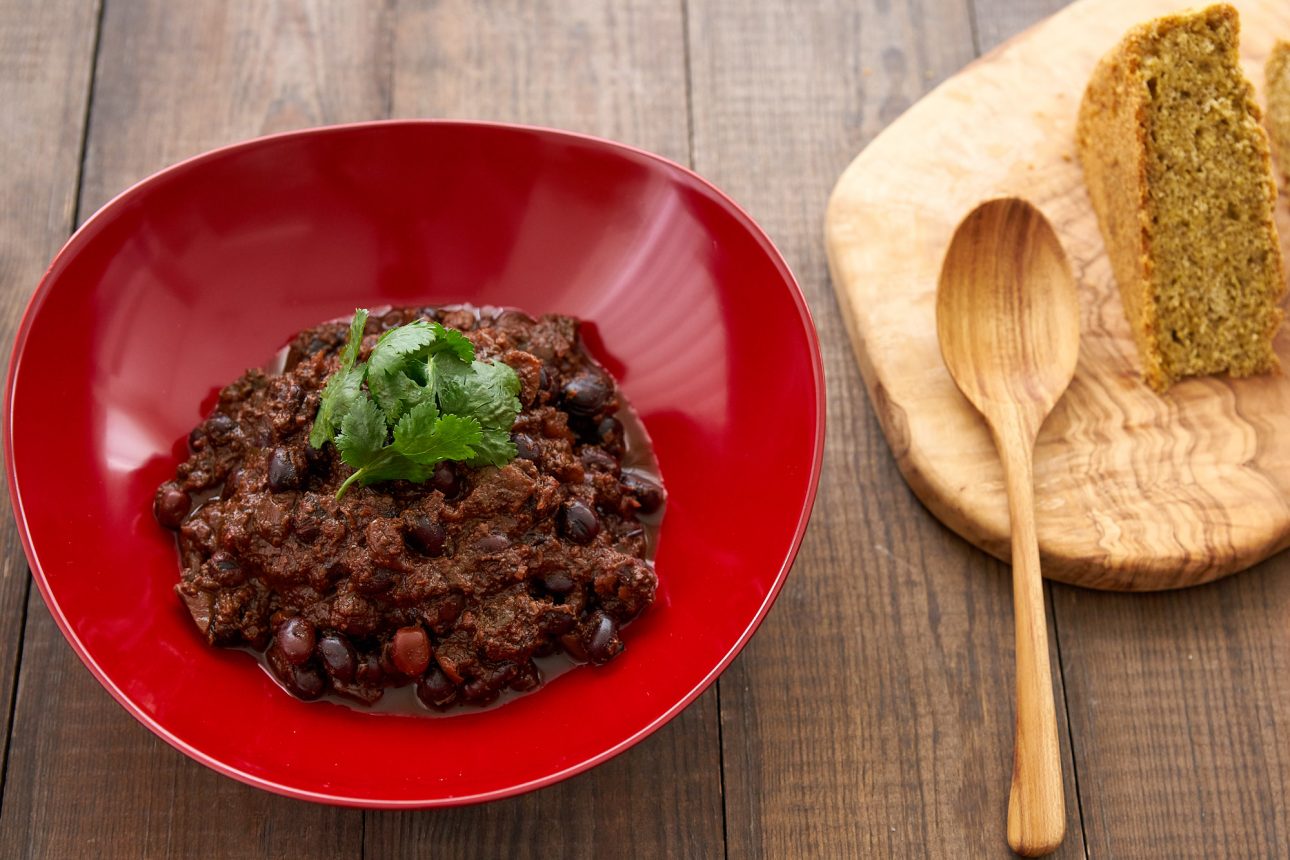 This gives this chili an incredibly flavorful base that gets an additional boosts from vegetable stock, tomato paste, and nutritional yeast. The beans also release a ton of glutamic acids into the stock as they cook, which provides another source of umami. Sealed up in a pressure cooker and cooked for an hour, the chili is rich and hearty, with layers of nuanced flavor and satiny tender beans.

I haven’t included any spicy chili peppers in this chili, but if you’re looking for something with a bit more heat, just add some cayenne pepper, or you can roast some serrano chilies along with the poblano’s and add them in as well. For the chili powder I made a blend using darker, milder ancho chilies, with a little extra cumin, but feel free to substitute 3 tablespoons of my chili powder if you want to save some time. 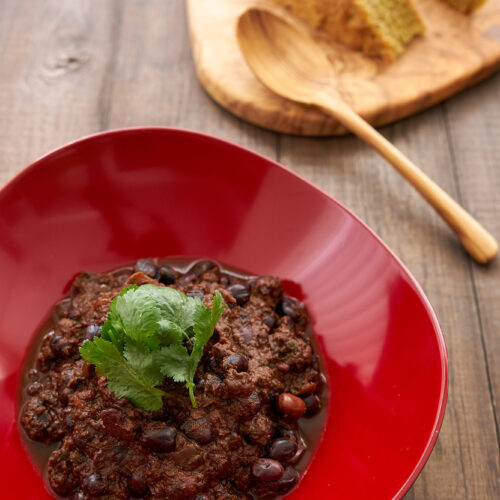 To prepare the ancho chilies, wipe with a damp paper towel and then remove the stem and seeds. Tear the chili into small pieces and then grind in a spice grinder into a powder. If you're chilies aren't completely dry (i.e. they're slightly elastic), you may need to roast them first in the oven for a few minutes.
Course Entree, Soups & Stews
Cuisine Tex Mex
Diet Dairy-Free, Gluten-Free, Low Sugar, Low-Fat, Pescatarian, Vegan, Vegetarian