Sometimes coming up with a great new recipe involves inspiration and ingenuity, other times it involves dumb luck, and then there are times where a recipe emerges from a silly mistake. Take these pancakes for example. I’d intended to make a zucchini pancake with a crisp crust of browned gruyere and caramelized scallions on the outside and tender zucchini held together with a bare minimum of batter.

I’m not sure if it’s the work projects I’m juggling right now, or the ensuing lack of sleep, but for some reason I thought it would be a good idea to add three eggs, to a batter that I wanted to be relatively dry. The moment the eggs landed in the bowl with the zucchini I knew I’d made a big mistake. I had a pourable green and yellow sludge that was about as likely to crisp in the pan as it was for it to stand up and start talking to me. Irritated and hungry, I was half tempted to toss the batter, but I hate to waste food, and so I decided to fry up what I had and call it lunch.

By the time the first pancake came out of the pan, the intoxicating aroma of caramelizing cheese and onions filled the kitchen, and I was thoroughly famished. In my rush to eat one, I burned the tips of my fingers, skipping the spatula and stuffing one straight from the pan into my mouth. One bite, and my first thought was “this is the best frittata I’ve ever had!” Except, it wasn’t, it was a failed pancake that I’d almost condemned to the trash. The texture was light and fluffy and yet the pancakes were tender and moist. The scallions were sweet and fragrant, and the browned gruyere bloomed in my mouth with a nutty umami that almost seemed too good to be true.

In retrospect perhaps the idea of making a crisp pancake with a juicy vegetable that contains no starch was misguided. As I go into my tenth year of food blogging, one lesson I’ve learned over and over is that whether in the kitchen or in life, sometimes our best ideas come from our failures. Perhaps at some point, I’ll attempt a crispy zucchini pancake again, but for the meantime, I’m perfectly content making these fluffy zucchini pancakes a regular part of my breakfast table! 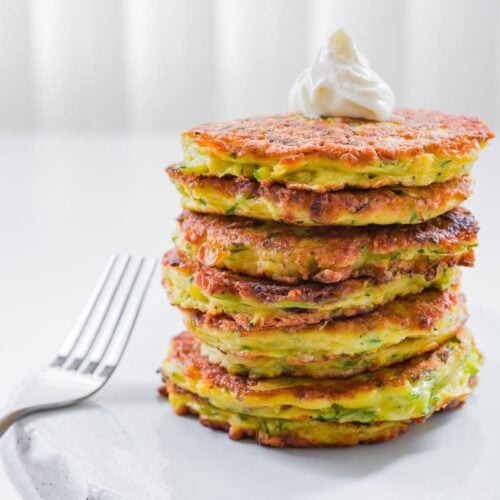