Earlier this week, we had a few days that were drizzly and dreary here in New York City. It’s a bit early in the year for the sun to retreat into hibernation, but the cooler weather was a welcome respite to the penetrating heat.

Although the weather has cooled down, it’s still summer, and the markets were flush with greens of every variety. After bagging some lithe, fuzzy okra, a bunch of emerald green lacinato kale, and carrots and beets with greens still attached, I decided to recreate one of my favorite takes on gumbo. It’s called Green Gumbo, and was originally prepared as a meat-free alternative during Lent.

The first time I tried Green Gumbo at the Crescent City Farmers Market, they put a raw oyster at the bottom of the cup, and the hot liquid cooked the oyster, releasing its umami rich brine into the Gumbo Z’Herbes. It didn’t taste like any gumbo I’d ever had, but it surprised and delighted my tastebuds, with it’s smoked mushrooms and green nutty flavor.

Since it’s not Lent, and and I’m not in New Orleans, I’ve gone non-traditional and added bacon and Andouille sausage. This gives it the smokey flavor of the more familiar varieties of gumbo, while still keeping it quick and easy to prepare. If you really want to go healthy, or vegetarian, just omit the sausage and bacon and you’ll have a green gumbo that’s satisfying, yet light enough for the warmer months. Just make sure you add the greens in odd numbers. 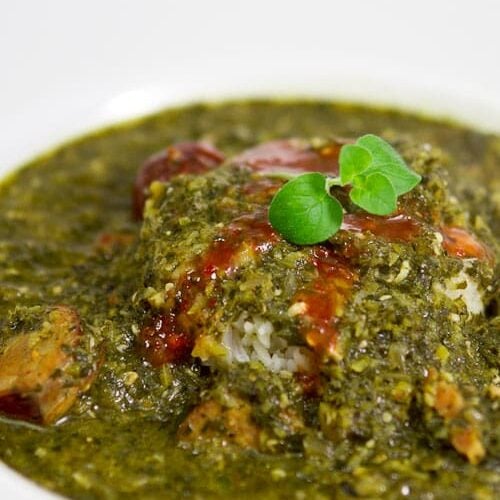