Eggplants are a bit like Brussel’s Sprouts in that it’s a vegetable that tends to polarize people. Although it’s one of my favorite vegetables, I know a lot of people don’t feel the same way, which is a shame because a well prepared eggplant is ultra rich and creamy with a mild natural sweetness.

While they’re a fairly versatile veggie, eggplants do need to be cooked thoroughly, otherwise they can be tough and chewy with an unpleasant green flavor. The easiest way to ensure you end up with tender eggplant is to deep fry it, but because of the porous texture of eggplant this can make it a bit greasy which presents its own set of problems.

To get around this, I borrowed a technique from Hasselback Potatoes to speed the cooking process while retaining the shape of the eggplant. By cutting slits into the eggplant it not only makes them cook faster and more evenly, it also helps them absorb the delightful flavors of garlic and soy sauce I used to season the dish.

Because eggplant becomes soft as it cooks it won’t hold together if you slice it like a potato. The trick is to cut the slits on both sides of the eggplant at different angles so that you’re able to maximize the surface area while retaining its structural integrity. Then you can pan-fry and steam the eggplant before seasoning it with browned garlic and soy sauce.

When choosing your eggplant look for small Japanese eggplants or other varieties of small thin-skinned eggplants without many seeds. These hasselback eggplants are great hot out of the pan, but they taste even better if you let it rest for a bit as the sauce has a chance to absorb into the eggplant. 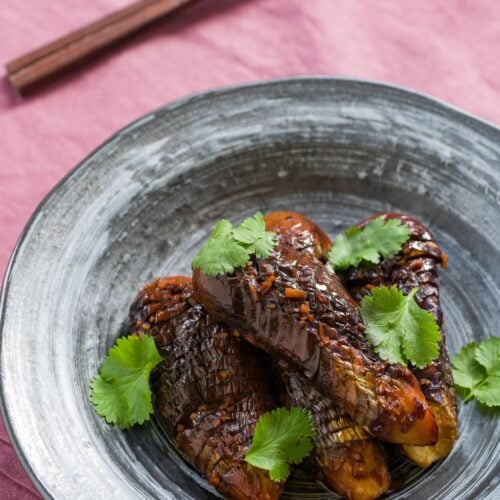