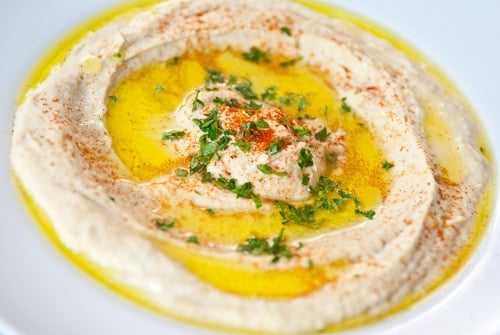 Until recently, I regarded hummus as an unremarkable dip served at parties with dried out flat bread. It wasn’t until I had an opportunity to visit Tel Aviv a few years ago that I had really good hummus. Indulgently creamy and velvety smooth, with a deep nutty flavour and subtle lemony zing, this was not the bland beige paste that comes in plastic tubs.

It was on that trip that I came to the realization that hummus makes for a fantastic meal, especially when topped with ingredients like egg, fava beans, mushrooms, or onion. For this version, I’ve caramelized the onions. The sweetness and golden onion flavour balances the creamy, nutty hummus, while adding an additional layer of flavour somewhere between the tahini and lemon.

Devoured with hot pillowy pita bread and a side of olives, there are few things more satisfying than hummus when you’re hungry on a hot day. I’ve since found a number of decent Hummus places here in New York, but at seven bucks a bowl, it’s always seemed a bit pricey for what is essentially a puree of chickpeas and tahini. Lately, I’ve been even more conscious about my food budget, and it occurred to me the other day that I haven’t had hummus in months.

Since losing my job in December, the mortgage and bills have gobbled up most of my life savings like giant pacman chomping up every last penny. It’s been hard to bear witness to and I’ve been far less charitable than usual because of it. The sad thing is that when times are tough, more people aren’t able to put food on the table and as a consequence, aid organizations need extra money to continue supporting their programs.

Walking through the shiny new Wholefoods in Tribeca, I thought about the challenge I put forth to the food blogging community earlier this week, and wondered how many hungry mouths it would help feed. At an average cost of twenty five cents a meal, the World Food Program feeds tens of millions of starving people every year.

As I reached for a $3 tub of Greek yogurt I realized it could pay for 12 meals and I stopped myself. In the produce section I paused for a moment in front of some brilliant orange lobster mushrooms that cost about 120 meals each, and then moved on. Seeing the grocery store in this perspective really changes the way you think about the things you put in your cart. I ended up leaving with enough food for several meals (including this hummus), and yet I managed to spend about half of what I normally do.

This hummus costs roughly $4 to make. I also made my own pita bread which adds about $1 to the cost for a total of $5 for this meal which will easily feed 4 people. Since I typically spend about $15 on ingredients per meal, I’m donating $10 to the World Food Program through Blog Away Hunger

TIPS: _This hummus is much smoother and creamier than the stuff sold in stores. I get this texture by adding back some of the liquid the beans cook in which makes it a little looser. The cooking liquid actually has a lot of flavour and I’m thinking about experimenting with it as a vegetarian stock. You can adjust the amount of liquid you add if you like it thinner or thicker.

Chunks, work well in dishes like guacamole, but I prefer my hummus smooth, so I really let the food processor go to work on it. Make sure you use good quality olive oil and don’t be shy with it, it keeps the hummus moist and gives it a nice creamy mouth feel.

What do you think?104 Cancel reply