Created in the city of Obihiro, which is in the Tokachi region of Hokkaido, Tokachi Butadon(十勝豚丼), is a hearty grilled pork bowl that was initially created as a satisfying meal for hungry farmers. Much like unagi, the pork for this Butadon is traditionally made by grilling and glazing thick slices of fatty pork with a sweet and savory sauce. For my version, I’ve adapted the recipe so that you can make this classic Japanese Pork Bowl without a grill while still getting the caramelized glaze and smoky char-grilled flavor.

How to Make Japanese Pork Bowl

The first thing you want to do is cook some Japanese short-grain rice. I’m going to assume you can handle that on your own, but if you’d like to see a tutorial, let me know in the comments below.

Next, you want to make the Butadon sauce for the pork bowl. Add the sake, soy sauce, mirin, sugar, and a smashed clove of garlic to a pot and bring this to a boil. Adjust the heat to maintain a low boil, but keep a close eye on it so that it doesn’t boil over. The sauce is done when it’s the consistency of maple syrup, and it hits a temperature of 230 degrees F (110 C).

For the pork, slice it into 1/4-inch thick pieces against the grain, and sprinkle it evenly with salt.

Get a frying pan nice and hot over medium-high heat and add the pork in a single layer. If you’re using pork belly, you’ll want to flip it over every few seconds to keep it from curling, but for other cuts of pork, you can let it brown on one side before flipping it.

Once the pork is cooked through and lightly browned on both sides, transfer it to a plate. Repeat this process if needed until you’ve cooked all of the pork.

Remove the pan from the heat and drain off the oil. Use paper towels to soak up any remaining oil in the pan. This is important as the oil not only adds unnecessary fat, it can also prevent the glaze from sticking to the pork.

Put the pan back on the heat and add 1/4 cup of the Butadon sauce to the pan. Return the pork to the pan, and flip the pieces over repeatedly until they’re well glazed.

Set a wire rack on a flame-proof tray and transfer the pork onto the rack.

Use a kitchen-torch to torch one side of the pork until the glaze is caramelized, and the pork is lightly charred around the edges.

To assemble the pork bowl, split the cooked rice between two bowls and drizzle a few spoonfuls of sauce over the rice.

Arrange the grilled pork on top of the rice and garnish your Butadon with chopped scallions.

What is Tokachi Butadon?

Tokachi Butadon(十勝豚丼) literally means “Tokachi-style pork bowl,” and the name is a reference to the region in central Hokkaido where the dish originated. It was created by a shop named Panchou in the city of Obihiro in the 1930s as a hearty meal to help farm laborers power through the day.

Inspired by unagi donburi, the shop owner wanted to make a high-energy for his customers, but unagi was not locally available locally at the time. Instead, he substituted a similarly rich cut of pork and grilled and glazed it in a savory-sweet sauce before serving it over a bowl of rice.

Until 2003, this grilled pork bowl was the standard-bearer for Butadon in Japan, but the BSE related ban on US beef imports that year caused national gyudon chains to start using pork instead of beef in their rice bowls. Since these were made using paper-thin slices of pork simmered with broth and onions, it was a dramatically different dish. To differentiate them, the original grilled style of Butadon was renamed after the region from which it came.

How do you pronounce Tokachi Butadon?

To-ka-chi Bu-ta-don has six syllables, and each one is pronounced as follows:

What’s the best cut of pork to use for this pork bowl?

The tastiest is pork belly because it holds up to the high temperature cooking the best; however, a whole bowl of pork belly can get a little heavy. That’s why I usually go half and half with pork belly, and another well-marbled cut, such as pork shoulder.

Can I use other types of meat to make Butadon?

You could use this sauce and method to make a rice bowl from other types of meat with a high fat content such as skin-on chicken thigh and well-marbled beef. That being said, you couldn’t call it Butadon, since there’s no pork in it.

Can I finish the pork in a broiler?

If you put the rack to the top position, you can get similar caramelization and browning. The problem is the amount of time it takes to get the browning. A torch will caramelize and brown almost instantly, while it will take a minute or more to get a similar result in the broiler. Since the pork is already fully cooked, this extra time can make it tough. For those of you thinking you could get around this by cooking the pork less in the pan, this won’t work because the higher moisture content of the partially cooked pork will cause the glaze to loosen, and it won’t adhere properly. 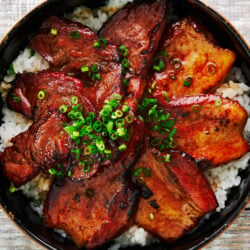