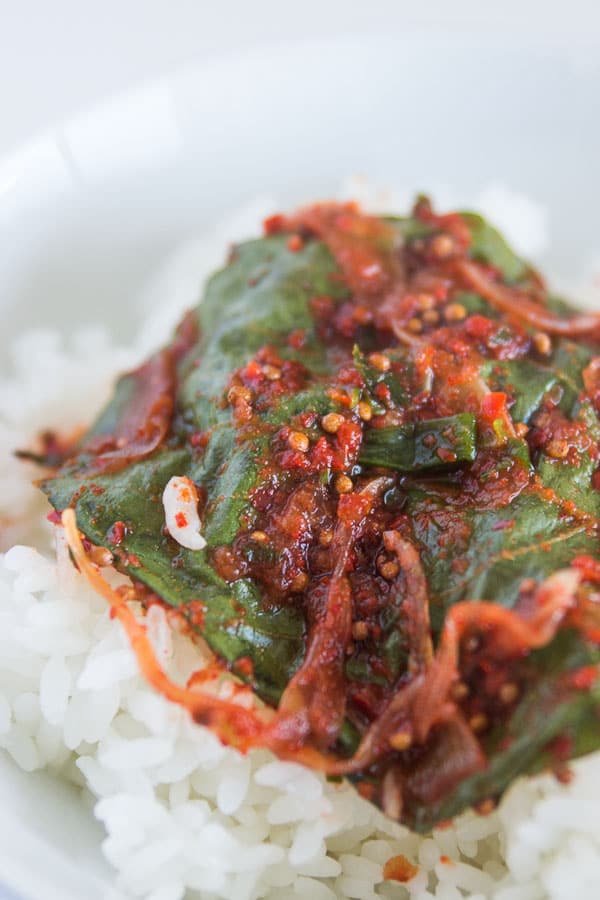 Kkaennip (깻잎김치) is an herb unique to Korean cuisine that’s often translated as “wild sesame” in Asian grocery stores. It has broad green saw-toothed leaves and a strong camphor-like scent that’s somewhere between basil and mint. That’s probably because kkaennip isn’t related to sesame as the name implies, but is a part of the genus Perilla, which is a member of the mint family. In the west you probably know another type of perilla called shiso: the green leaf that’s often used to garnish plates at sushi restaurants. Although they’re similar in appearance, kkaennip has a distinct flavor from Japanese shiso that’s more nutty and complex.

In Korea, the large leaves are often used to wrap grilled meat and they’re also used as an herb in a variety of dishes including Kimbap and Gamjatang. My favorite way to prepare kkaennip is to turn it into kimchi. It’s relatively simple to make with a handful of savory and spicy ingredients getting mixed into a paste and spread between the leaves.

Left to pickle for a week, the pungent garlic, spicy chili, and sweet asian pear all mingle with the herbaceous kkaennip to create a delicious wrapper that makes short work of a bowl of hot rice. I like to grab the stem of a leaf to separate it from the rest, lay the kimchi on top of the rice, and then use my chopsticks to tuck the sides of the leaf under the rice, making a little bundle of spicy, savory rice that’s as fun to eat as it is delicious.

For my version I usually add a little Asian pear(or sweet apple) puree to lend a hint of sweetness. I also like adding kkaennip seeds to accent the flavor of the leaves and to deliver a crunchy texture kind of like giant poppy seeds. If you can’t find them in your area, toasted sesame seeds will work too. 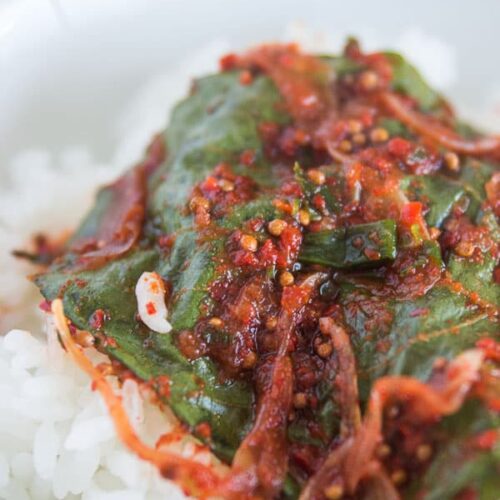