I’m often asked “if you love cooking so much, why don’t you open a restaurant”. It’s a question I’ve mull over personally from time to time, but running a restaurant involves a lot more than just cooking, and I always end up with more questions than answers. One thing I do know is that if I ever open a restaurant, this is a dish that would go on the menu every Spring.

I could go on and on about how moist and tender these tiny grass-fed lamb chops that Lava Lake Lamb sent over were; or how the luscious plummy agrodulce made the briny crust on the seared lamb chops explode in an opus of flavour on my tongue; or even about how the buttery, Champ with crispy wisps of fried scallions could put a smile on Simon Scowell’s face. But that would take the spotlight away from the overwintered parsnips. “Parsnips?!” you say? Let me try to explain.

Spring is upon us, and much like my wardrobe, the farmer’s market is in transition. Spring greens are popping up and the last of the winter root vegetables on their way out. These parsnips were in a bin labelled “overwintered”, and despite the unappealing name, they looked bright and fresh, with coffee brown bits of damp earth still clinging to the roots.

Curiosity piqued, I asked about them. As it turns out, they were fresh out of the ground. Apparently you can leave last season’s parsnips underground all winter, then dig them up in spring. The lady raved about how they’d taste like candy if roasted in a bit of olive oil. This got me sufficiently curious to plunk down eight bucks for a bag.

After getting home, I grabbed a knife and sliced into one. My knife was greeted by a pithy soft interior, a dead giveaway that a root was waaay past its prime. I started to think that I’d been bamboozled. I could almost picture the farmer riding back up-state, laughing at the dumb city folk spending top dollar on some parsnips they’d forgotten to pick. Still, I’d spent the dough and figured at worst, I’d be out a couple tablespoons of olive oil and a pinch of salt, so I pushed ahead, tossing them in the oven.

Forty minutes later, I cracked open the oven and jabbed one of the thicker pieces with a fork, fully expecting the tines to be met by a stringy piece of wood. To my surprise, the fork slid through the crisp crust that had formed and into the pillowy soft interior. I pulled one out and popped it into my mouth, cursing myself for burning my tongue, before noticing that the crispy caramelized exterior gave way to reveal its candy sweet interior, which then melted into tender pool of vegetal bliss. 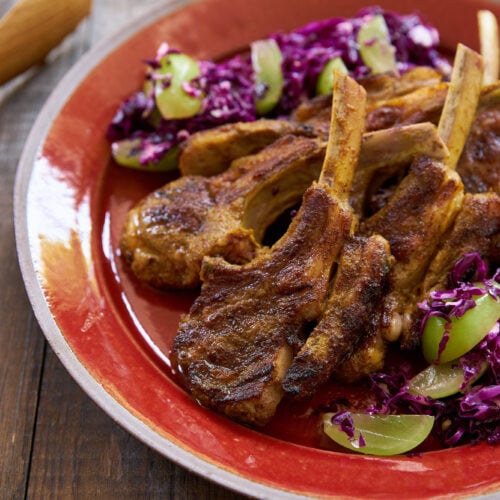 for champ with crispy scallions