I spent the first three days of this week in the kitchen preparing for a 75 person cocktail party I catered on Wednesday. It’s the first time I’ve ever done anything on that scale, and to be honest, it was a bit daunting. It all ended up working out in the end though and these polpette glazed with a caramelized tomato sauce were one of the most popular trays, coming back empty almost every time.

As I was planning the menu last week, I noticed that I don’t have much in the way of canapés on this blog. It hasn’t been intentional, but I don’t do much of this type of entertaining personally, so I really had to do a bit of thinking to come up with a list of Italian themed bite sized hors d’oeuvres that I could prep ahead and assemble onsite.

These polpette were among the 5 menu items the client chose. I figured it would be simple, could be prepped ahead, then glazed and heated at the last minute. Unfortunately, there was no heat source at the venue and the client wasn’t too keen on having a convection oven brought in, so I needed to make a polpette that would be moist and tender, even at room temperature.

My solution was to use a high percentage of breadcrumbs (about 1/3 by volume) along with a mix of gelatin and egg yolk to emulsify and stabilize the liquids in the mixture. Unlike the proteins in meat, that have a tendency to tighten up and squeeze out moisture, the bread crumbs are like a sponge and will absorb liquid and retain it, even after being cooked. The egg yolks act as an emulsifier, helping the fats and meat juices mix, and together with the gelatin they act as a stabilizer, preventing the secreted juices from leaking out all over the pan.

These polpette nearly melt in your mouth when served warm, and while much firmer at room temperature, they’re still quite tender. Rich and creamy with a bright zing from the meyer lemon zest and tarragon, these meatballs are glazed in a caramelized tomato sauce that gives the polpette a lacquered sheen that rounds out the meaty vegetal flavours with some sweet concentrated fruit. 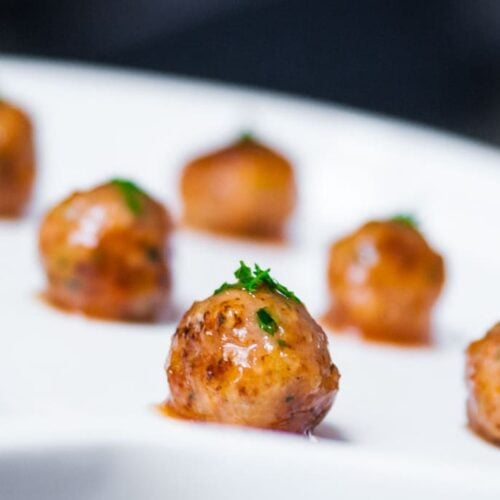 What do you think?58 Cancel reply