The past week has been one filled with excitement, sleep deprivation and sadness. Excitement, because I got to go down to Austin for SxSW and Techmunch, where I spoke to a room filled with eager food bloggers about how to keep your blog from crashing as it grows. For anyone who’s been to Austin during SxSW, you know what an amazing environment it is for meeting new people and developing new ideas.

But the evening I arrived in Austin (just 2 days after I’d left Tokyo) the enthusiasm I’d had was quickly replaced with other feelings, when I got word from a friend in Tokyo that they’d had a VERY big earthquake. Traditional news outlets revealed nothing about the quake for almost an hour after it happend, so I turned to Twitter, and was horrified by the messages and photos being sent from cellphones all over Japan.

As images of my homeland being shaken and washed away began flooding the news, and the true scope of the devastation became apparent, I was overcome with an almost unbearable sense of sadness. Thankfully my family and friends are all safe and accounted for, but I don’t think there’s a single person on Earth that hasn’t been traumatized by images of the death and destruction.

The show of support from around the world, and the solidarity and resilience shown amongst the people of Japan have been the one bright spot amongst all of this, and it makes me proud to be Japanese. If any good can come of this, I hope that it serves to kickstart the nation and get it out of the rut it’s been in for 20 years now.

In that spirit of new beginnings, I created this fresh take on a classic Japanese dish: サバの味噌に (saba no miso ni), which literally means “mackerel simmered in miso”. Mackerel is an oily fish, so it benefits from a long braise, and if you cook it long enough, the bones become so soft you can eat the whole thing. The ginger and garlic help stave off the funk that mackerel can have, and the miso and mirin turn into a sweet and savory glaze that’s delicious over hot rice. To update it a bit, I’ve paired this with a crisp salad of tamed onions and celery that gives the tender braised mackerel a textural contrast as well as a tart and spicy kick that compliments the miso.

This recipe will be going into a charity cookbook called Peko Peko: A Charity Cookbook for Japan that I’m working on with Stacie from One Hungry Mama and Rachael from La Fuji Mama. It’s going to be full of awesome Japanese recipes contributed by rockstar bloggers and photos taken by yours truly. We are currently looking for sponsors to help cover the printing costs, so if you work for, or know of a company that would be interested in sponsoring the book please send us an email at info [at] pekopekocookbook [dot] com. 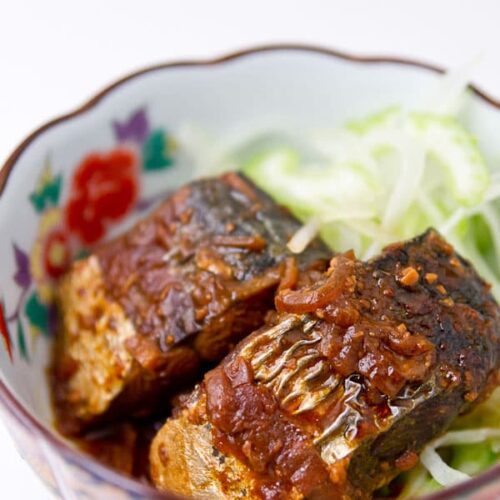