Molokhia ( ملوخية), also known as Jute, or Jews Mallow is the name of both a plant and a dish. It has medium sized saw-toothed leaves that come to a point at the tip and have small tendrils at the base of each leaf. Nutritionally, it has three times the calcium and phospherous as Kale, and four times the amount of riboflavin. It also provides 70% of the RDA value for Vitamin C, 25% of the RDA of Vitamin A amongst a host of other minerals and vitamins. Put simply, it’s an extremely nutrient dense vegetable that’s widely eaten throughout the Middle East and Asia.

So why hasn’t it enjoyed the same kind of popularity in the US? My guess is that it has to do with the mouthfeel. Like other members of the mallow family, including Okra and Marsh Mallow, the plant has a mucilaginous texture that’s intensified by bruising and lightly cooking the leaves. While it’s a cherished consistency in many cultures, I can see how it might be a turn-off if you associate the texture with the unpleasantness that comes with a cold.

Molokhia the dish is made throughout much of Africa and the Middle East, but the origins of the dish are said to be in ancient Egypt, where it’s still popular to this day. In the Egyptian preparation, the Molokhia leaves are stripped from the stems, then minced using a mezzaluna. It’s cooked with ground coriander, garlic and stock and is often served with chicken (or more traditionally rabbit). In Levantine countries such as Syria and Lebanon, Molokhia is made with the whole leaves and is served with a vinegar and onion sauce along with toasted pita squares.

While I’ve used Molokhia for years in Japanese cuisine, I first encountered the eponymous dish while cooking in a kitchen in the Middle East where the chefs were Egyptian, Syrian and Lebanese. I was struck by how utterly simple it was and yet so comforting. Savory, and redolent of garlic and coriander, Molokhia has a verdant flavor made rich with the viscous mucilage from the leaves. In many ways, it reminded me of a marvelous green gumbo I once had at a farmers market in New Orleans.

The fresh leaves can be hard to find in the US, but I’ve seen them in Asian grocery stores. It goes by the name bai po in Thailand, nalta sag in India, saluyot in the Philippines, and moroheiya in Japan. You should also be able to find it frozen in any Middle Eastern grocery store.

For vegetarians, you can make this without chicken. Just substitute some vegetable stock for the chicken stock and serve it with roasted veggies such as bell peppers, zucchini and eggplant. 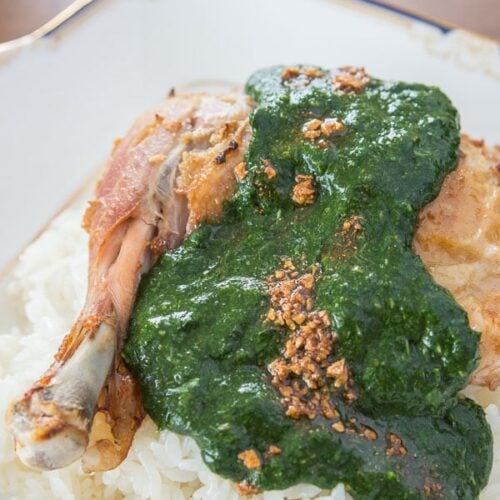