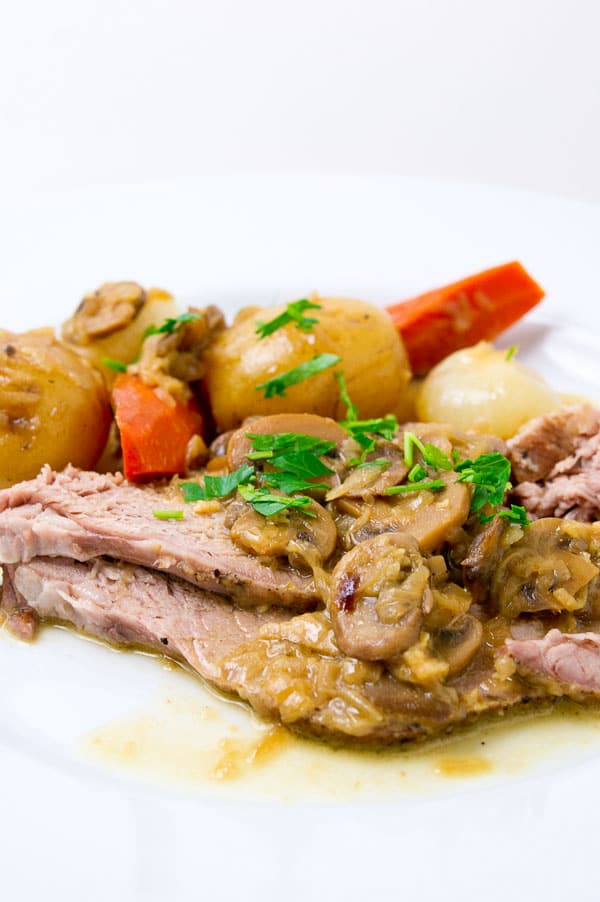 On Friday, I was on the subway heading home from a meeting that had gone really well, when I finally checked Twitter for the first time all afternoon. There was a deluge of tweets buzzing about the 3 finalists for Project Food Blog. At first I was shocked. Then I felt honored by the outpouring of love and support I’d seen throughout the competition (even from former competitors). That didn’t last long though because I soon realized I had nothing planned for Challenge #10!

I’d been agonizing for weeks over what I would do if I made it to the final round of Project Food Blog. Would it be a month-long project like my choucroute garnie, or perhaps an extravagant meal that sparkled like a fireworks display with gelées and foams. I’d had many ideas, but I honestly didn’t think I’d make it this far, especially given all the amazing food bloggers who were participating in the competition.

As the train thundered down the tracks towards home, I thought about all the work I’d put into the past challenges, and for that matter, all the work I’d put into this blog over the past 3 1/2 years. The reasons I started the blog and the reason I kept blogging came back to me. I started No Recipes for my friends, but what kept me blogging is all the new friends I’ve met through here since then.

It was there, in that dingy, creaky train-car that it became very clear to me what my blog is about. No Recipes is about giving you the flexibility to make good dishes better. Through the blog, I show you what I did to improve my favorite dishes, in hopes that the information helps make you a better cook. I also hope it inspires you to go “off-recipe” and take on your own culinary improvement projects.

Standing on that packed rush hour train, a sense of calm washed over me because I knew exactly what I had to do for my final post. Go back to basics.

This is the first dish I learned to make in a crock-pot, and is one that I’m sure many of you in the US are very familiar with: Mushroom and Onion Pot Roast. The classic recipe goes something like this: 1 roast, 2 cans of Campbell’s Cream of Mushroom Soup, 1 package of Lipton’s French Onion Soup, water, carrots and potatoes.

It’s a simple one-pot affair that’s the staple of dorm room dinner parties, and yet it’s soul satisfyingly good. I’ve always wondered what it was that made this humble dish so good? Could it be the fork-tender meat the slow cooking yields? Perhaps it has to do with the amount of effort. Or maybe there’s some magical ingredient in the soup mixes.

As it turns out, it’s probably a little of all those things, but more the latter. Both Campbell’s Cream of Mushroom Soup and Lipton’s Onion Soup contain MSG. Some of you are probably looking at the screen and wondering “What’s wrong with that?”. The answer is “probably nothing”, if saving time is your primary concern. However, adding MSG is like plating dinner with a shovel; subtle interplays between the ingredients get lost in the barrage of umami (savory taste) coming from the MSG.

As Harold McGee put it in his tome On Food and Cooking, “Flavor is part taste, mostly smell”. By taste, he’s referring to our basic tastes, as in salt, sweet, sour, bitter, and umami. The fun part, and what lets us distinguish a blackberry from a raspberry, is the aroma. There are thousands of aroma-producing compounds present in food, and cooking the food rearranges them creating new aromas. This is the reason why a raw steak, a boiled steak and a grilled steak smell very different.

The Maillard reaction is responsible for many of these changes in flavor. It occurs when high temperatures cause a chemical reaction between amino acids and sugars in food. Boiling a steak just doesn’t get the temperature hot enough (water boils at 212°F) to encourage a Maillard reaction to occur. This is why most people prefer their steaks grilled or fried rather than boiled. The brown crust that forms on the outside of a grilled steak is where all those newly formed aroma compounds are. This is also the reason why most recipes have you brown the meat before adding wet ingredients. The Maillard reaction also occurs in many other types of food, such as in onions, garlic, mushrooms, flour, and milk to name a few.

Getting back to my pot roast, I wanted it to be very flavorful with a good balance between all of the tastes, and a lot of aroma. Here’s how I came up with my version of Mushroom Onion Pot Roast. Hopefully it helps you create your own version, or better yet, an entirely new dish using some of the same principles.

I like to start with meat first. For one thing, we want to brown the meat at a high temperature, and if something else has been in the pan already, it will burn. Another reason is that the oil the meat releases is perfect for sautéing our aromatics in later.

As for the type of protein it’s really up to you. Braising is a technique that benefits meats with a lot of connective tissue and fat, so cheaper cuts like chuck, pork butt (pork shoulder), and shanks work well. If you want to keep with the tradition of a “pot roast”, it should be a cut of meat that you can carve, but this is more about presentation than anything else, and cuts of meat not traditionally considered for roasts such as ribs would also work really well.

If you’re a vegetarian, you could skip this part altogether and rely on your aromatics to produce most of your flavor.

In addition to adding aroma, onions are also high in glutamic acid, and mushrooms contain guanosine monophosphate, which means they’re the perfect pairing to naturally add umami to our dish.

For variations you could try experimenting with different types of onions and mushrooms, but you can also add other aromatics such as celery, peppers, or tomatoes.

This could be anything from water to wine to stock. The idea is to get a little liquid in the pan so things don’t burn. Over time, the meat and vegetables will release more liquid, so there’s no need to add a lot.

Since there are many taste and aroma rich foods in this pot roast, you could probably get away with using water, but I really wanted to double down on flavor and decided to go with a combination of wine and stock. If
you wanted to make this really rich, you could use milk instead. I added a bit of cream at the very end to add the richness.

Here’s the easy part. Just go into your vegetable drawer and look for veggies that can cook for a while without falling apart. Root vegetables such as carrots, potatoes, parsnips, and celery root are perfect for this. You can also add softer veggies like pumpkin, baby onions, or turnips towards the end.

I used baby Yukon Gold Potatoes and left them whole, which prevents them from absorbing too much moisture and falling apart. I also added big chunks of carrot and some Cipollini Onions about halfway through the cooking process.

That’s it! The rest, such as the spices and the amount of salt are entirely up to you. If you’re still with me after all that science and pontification, here’s a short video I put together that shows the lighter side of making a great pot roast.

And of course, a recipe, just in case you want to see exactly what I made: 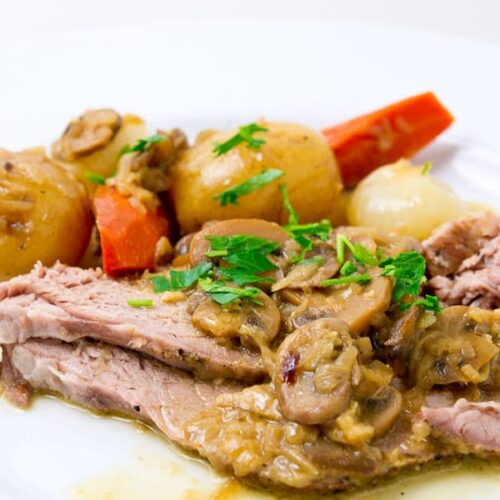 If you are using a crock-pot, just put the meat and mushrooms into the crock-pot when they are done. Then, pour the onion/wine/stock mixture into the crock-pot along with the thyme, salt, and vegetables. Set it to low and let it do it’s thing for 6-8 hours.
Course Entree
Cuisine American, Best
Diet Gluten-Free, Low Sugar, Low-Carb

What do you think?100 Cancel reply