Today is January 7th which is known as nanakusa no sekku (七草の節句), or the Festival of the Seven Weeds in Japan. Historically the 7th marked the last day of Oshougatsu (Japanese New Years), and to this day, people eat Nanakusa Gayu (七草がゆ) to observe it.

Nanakusa Gayu, which literally translates to “seven weeds rice porridge”, is a type of okayu or rice porridge. Of the many types of rice porridge in Japan, okayu tends to be very soft and very bland because it’s typically something you eat when you’re sick. Nanakusa Gayu is no exception and aside from the cultural and spiritual significance, it’s not a highlight of the Japanese culinary repertoire.

Some people eat it out of tradition, some eat it to make amends for their New Years gluttony, while others eat it out of the belief that it will ensure health and wellness for the rest of the year, but I’ve yet to meet anyone that eats it because it tastes good.

Instead of the usual flavorless greul, I decided to take this dish, which dates back 1000 years to the Heian Period, and do something new with it. The vision was to make a creamy flavorful risotto with the sharp verdant notes of the nanakusa prominently featured. So what are these seven weeds you ask?

For the rice, I wanted to retain the creamy texture of okayu, but with plump grains of al dente rice. I’d originally thought about using Carnaroli or Arborio, but decided that strayed too far from from the original and so I used Japanese sushi rice instead. This turned out to be a really good call, so much so that I don’t think I’ll be using Italian rice to make risotto anymore.

As for the seven weeds, any preparation including the whole leaves would mean the flavors would be hard to disperse in the rice, and cooking them tends to tame their flavor. That’s why I decided to puree the leaves into a raw pesto with some olive oil. Placing a dollop of nanakusa pesto on top of the risotto not only presents nicely, it allows you to progressively stir it in, changing the flavor of the rice as you go.

Because some of these greens will probably be pretty hard to come by in the US, my recommendation is to use a selection of greens you enjoy that are available near you. Arugula, Rapini, Parsley, Kale, and Watercress would all work well. 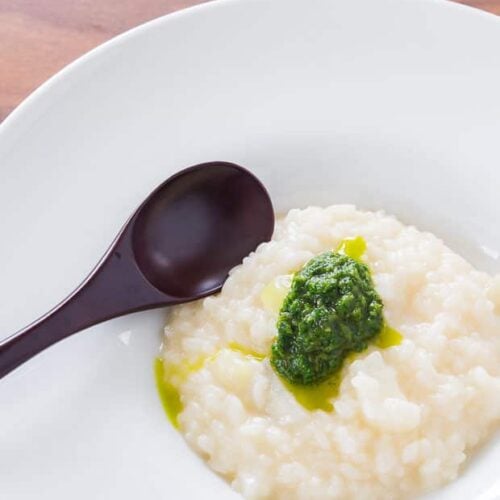