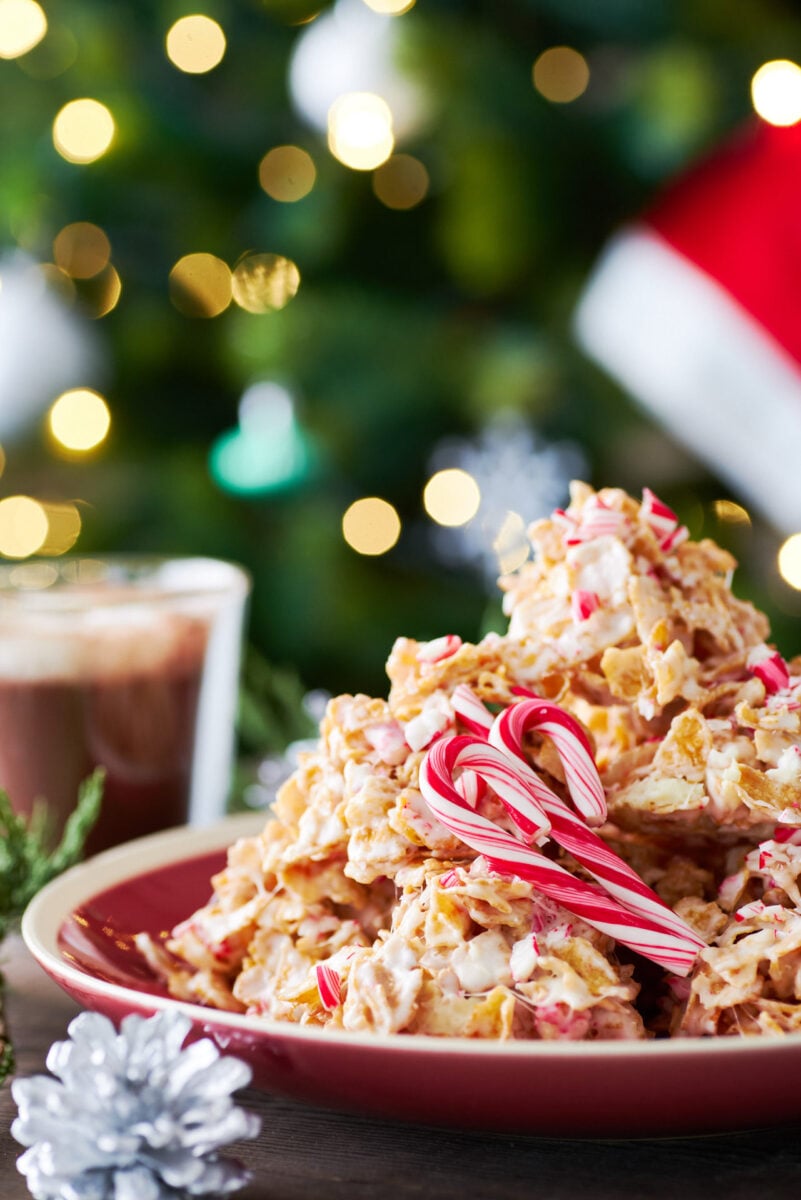 I love the holiday season, but it’s also one of the busiest times of the year for me, and events like bake-sales and potlucks just add to the stress for me. That’s why I always like to have a simple treat on standby should the need arise. Last year, it was my Butter Almond Toffee, and the year before it was my Cacao Nib Brittle. This year I’ve come up with a mashup between No-Bake Cornflake Cookies and Peppermint Bark, which takes the best parts of both treats to make a holiday treat that’s like a mouthful of Christmas in each bite!

I kept this one pretty simple, but there are so many variations you can make on this that the possibilities are endless.

I used unsweetened corn flakes because I like their crisp texture and the way the large flakes creates air pockets so that each treat isn’t as dense as it would be if you used a smaller cereal like Rice Krispies. I think this will work with a lot of cereals though, so I encourage you to go try out a bunch of them and see what you like best. One thing I recommend doing though is to use an unsweetened cereal as the marshmallows, white chocolate and candy canes add quite a bit of sugar, and using something like frosted corn flakes will make them too sweet. 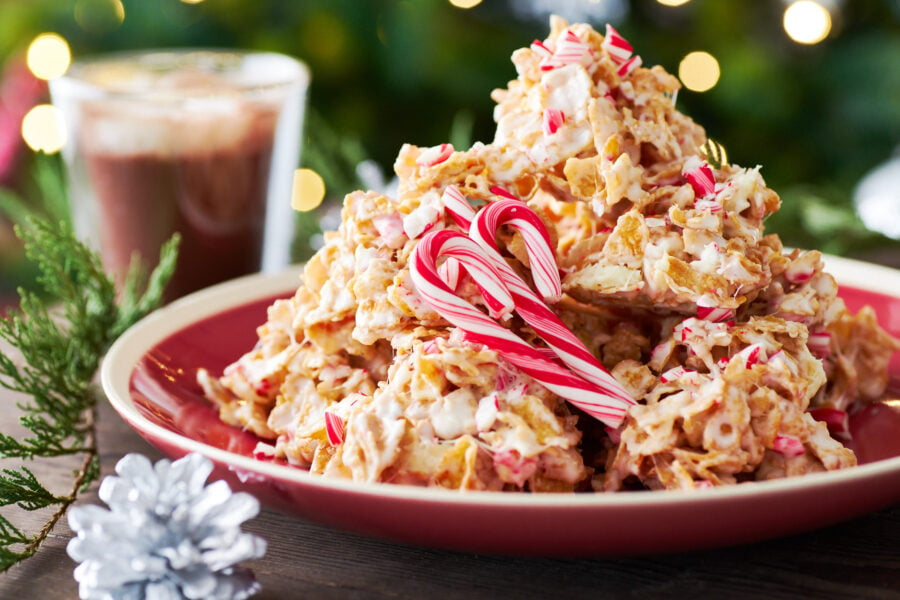 It wouldn’t be peppermint bark without chocolate, and I like adding chocolate féves(a.k.a. buttons) to the molten marshmallow mixture, along with the cereal. The chocolate partially melts into the marshmallows, allowing it to coat the cornflakes, but you still end up with some small chunks of chocolate inside which provides an exciting surprise in each bite. I went with Valrhona Ivoire, white chocolate to keep things Christmasy, but this will work with any high-quality chocolate, including milk chocolate and dark chocolate. Heck, if you really wanna go bananas, try using a mix of both white and dark.

Because I wanted the peppermint flavor of the candy to shine, the only flavoring I added to the marshmallow mixture is vanilla extract. That being said, there’s a world of possibilities here, and you can add powdered ingredients like cocoa powder or matcha powder to add both color and flavor to your Peppermint Bark. You can also use liquid extracts and essences to up the ante, especially if you’re not going to be using candy canes.

The only mix-in I’ve used here is crushed peppermint candy, but the sky’s the limit here. Nuts such as almonds or green pistachios are a fun addition, and if you’re making this for other holidays, try mixing in other candy, such as candy corn for Halloween, and cinnamon hearts for Valentines Day.

I wanted to make these a little fancy, so chose to roll these into balls, but if you need to make a lot, you can also press this into a parchment lined baking sheet and then cut them into bars once it’s set. You could also press them into ring molds to make them round, and if you’re feeling particularly creative try sculpting them into shapes like snowmen, and Christmas trees, which you can decorate with candy. 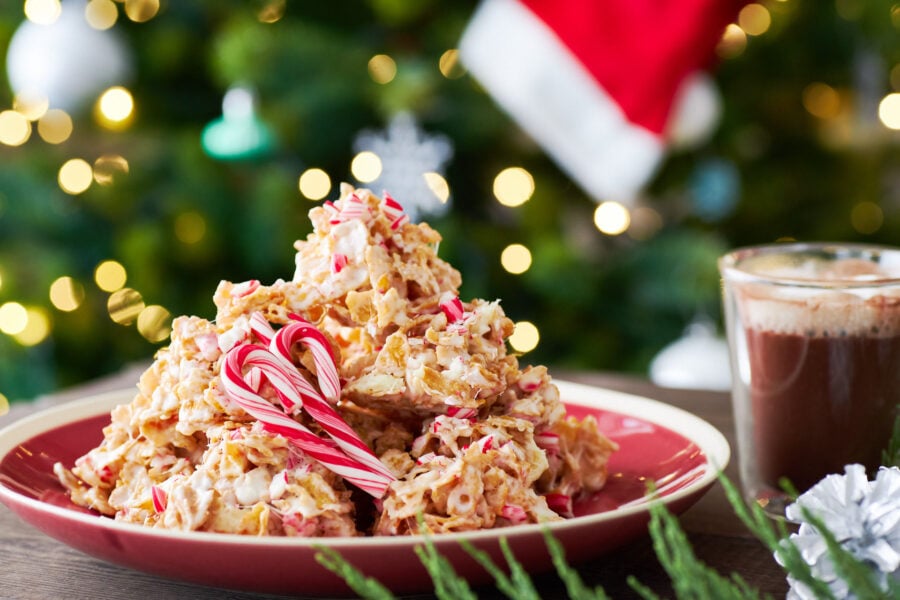 How to Make Crispy Peppermint Bark

First, the marshmallows, butter, and vanilla get microwaved at low power until the marshmallows puff up and get soft. This gets mixed together until it forms this thick buttery sauce.

Then you just add the cereal, chocolate and candy canes and mix it all together. The hot sticky marshmallow mixture not only binds everything together, it partially melts the chocolate, allowing it to coat the cornflakes. Since it doesn’t completely melt, you also get some chunks of chocolate as well.

Then you just have to shape the mixture into whatever form you want, and then put it in the fridge to set. Honestly, the hardest part of making this no-bake treat is to resist the urge to eat the whole bowl as you mix it together. Since you don’t need to use the oven or stove top, it’s perfect for making with kids, but the marshmallow mixture is hot when it comes out of the microwave, so you do still need to exercise some caution. 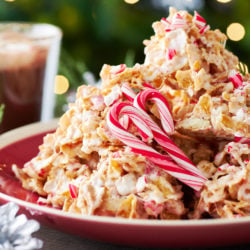 If you enjoyed watching this, please let me know by heading to my YouTube Channel and giving this video a like👍🏽, Subscribing to my channel, and leaving a comment to let me know what you think. These videos take a ton of time to produce and hearing from you is the best motivation to keep me going.