With six inches of snow on the ground outside, I decided to get stewing season off to a start with an idea I’ve had simmering since I made a batch of preserved meyer lemons last winter. The fermentation brings out an earthy almost meaty flavor while retaining the lemon’s refreshing tartness. I’ve been dreaming of stewing these with pork belly, but have been waiting for sub-zero temperatures that could (in my mind) justify all that fat. This morning I got my wish, with bright white flurries twirling massive clumps of snow past my windows.

After donning snow boots and trudging to my butcher, I came home famished, ready to eat what I’d planned to simmer for hours. That’s about when the concept got simplified, and the pressure cooker came out of the cupboard.

Although I’d only planned to stew the pork belly, opening the pressure cooker and tasting the sauce changed my mind. It was delicious and begged to have something added that would soak up all the flavors in the sauce. Three potatoes and 10 minutes later, I had what might very well be the best stew I’ve ever made.

With big hunks of pork belly simmered in caramelized aromatics, white wine and tomatoes, this dish has epic umami. It’s one of those dishes that requires relatively few ingredients and very little effort to make and yet it tastes like you spent a whole day making it.

The preserved lemons add citrus notes, but thanks to the fermentation, they’re more robust and earthy than bright and fruity. The tartness helps cut through the richness of the pork giving this dish a lighter feel than the cut of meat implies. But the best part is the sauce and potatoes. Cooked until they’re practically melting into each other, the potatoes absorb all the flavor in the sauce, while the sauce gains body that allows it to cloak the meat in a thick layer of flavor.

While some dishes work better with fattier pork bellies, this one works best with pork belly that’s about 20% fat and 80% meat. If you want a slightly less ridiculous version, try making this with pork shoulder, or even chicken legs, I promise you won’t be disappointed. 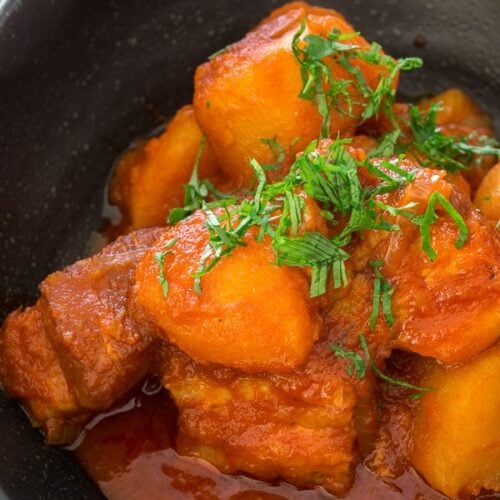