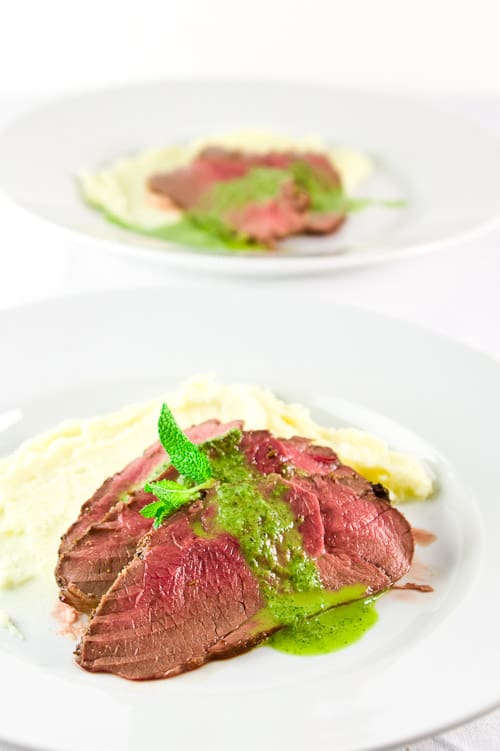 As some of you may know, I’m participating in the week of eating in challenge this week, which means I’m supposed to eat in for 7 straight days. Simple right? Well, if you have a job with unpredictably long hours and an evening schedule filled with freelance writing and photography gigs, it’s actually more challenging than it sounds.

I had one of those days at work today that was gobbled up by time hungry meetings. The last one was a four hour humdinger, which left me feeling drained, and delayed my arrival home by nearly two hours. This wouldn’t normally be much of an issue, except I’d planned on making a roast tonight. I’m sure you’re falling out of your seat laughing at me for planning such an ambitious meal on a weeknight, but I had a defrosted lamb roast in the fridge which bah’ed “coohook meehee” every time I opened the door.

The lamb was a gorgeous one and a half pound top round sent over by the nice folks at Lava Lake Lamb, a great grass-fed outfit that makes some of the best American lamb I’ve ever had. For those that aren’t familiar with a top round, it’s the the most tender cut from the hind leg, which is both flavourful and lean. It’s great for steaks and roasts and I had high hopes of doing a slow roast in a cool oven and serving it with a cauliflower gratin and a mint gelée.

Since i didn’t have time to stop at the store, the cauliflower was out, and the slow roast would have had me eating after midnight. To save time, I decided to adapt my method of making steaks and seared the whole top round in a cast iron skillet before throwing it in the oven to finish roasting. It turned out gorgeously and I’m not sure I’d do it any differently next time. Since the lamb doesn’t marinate, it’s important to be very generous with the rub so the roast gets a nice thick crust of salt.

Since a gelée needs to be strained and cooled, I opted for an updated version of a classic mint sauce, that provides a nice sweet and tangy counterpoint to the salty crust. The fresh mint also plays nicely with the minerally red lamb that would make the staunchest lamb nay-sayer reconsider their stand.

I served this quick roast lamb with a smear of my cheesy potatoes. The yukon gold potatoes are boiled whole, until they’re tender. While the potatoes are cooking, I grate a generous amount of cheese (I used asiago this time) into a bowl. When the potatoes are tender, I just pass them through a ricer which not only mashes them, but peels them at the same time. After the cheese is mixed in, I add cream until the potatoes are at a consistency I like, then season them with salt as needed.

This whole meal took only 40 minutes to make and I was sitting down to this gorgeous plate by 8:10.

What do you think?37 Cancel reply