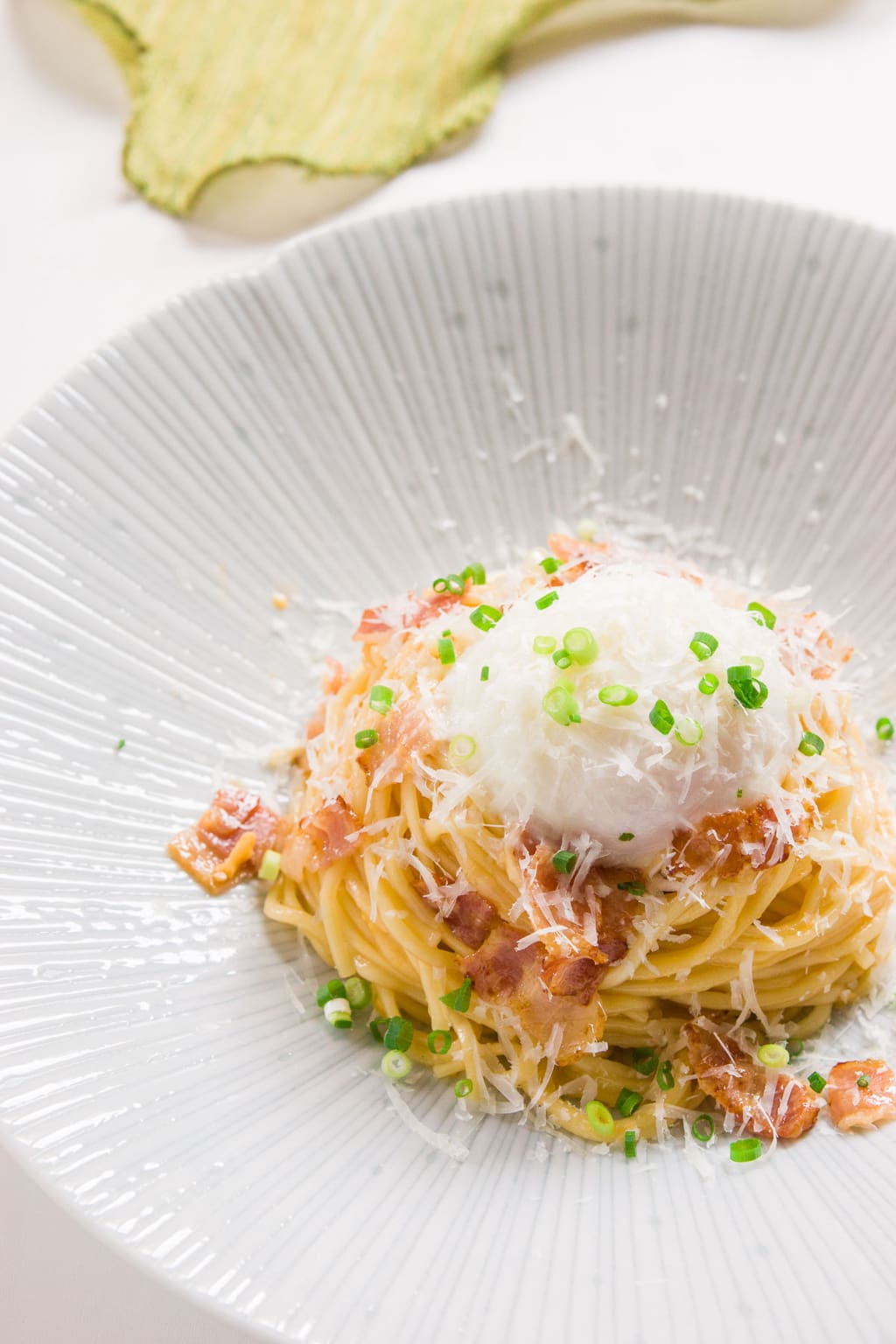 When Nissin launched their RAOH brand of restaurant-style ramen back in October, we partnered with them to come up with a unique take on each of their flavors. While you can prepare Nissin RAOH Umami Soy Sauce, Umami Miso and Umami Tonkotsu into a bowl of authentic ramen in about 4 minutes, I wanted to push the envelope and come up with some unique ways to enjoy these traditional flavors.

My first creation turned RAOH Umami Soy Sauce into a Chinese style Hot and Sour Soup using just a handful of ingredients. Next up, I stuck closer to home using RAOH Umami Miso for a quick Hokkaido-style ramen loaded with corn, and miso flavored ground pork, which I finished with a pat of butter. For the last flavor, RAOH Umami Tonkotsu, I really wanted to make a major departure from the standard format of ramen, leaving Asia and the soup behind.

I came up with this Ramen Alla Carbonara, tossing the delightfully al dente RAOH Ramen noodles in a creamy sauce made from eggs and some of the tonkotsu soup base. The smokey porcine goodness of bacon pairs beautifully with the creamy umami-rich pork bone flavor of the tonkotsu ramen. Topped with some scallions, pecorino romano, and a slow cooked egg that melts into the nest of noodles like a satiny dollop of devonshire cream, this east-meets-west Ramen Alla Carbonara is not only easy, it tastes divine.

The key to why this works so well as a pasta is in the noodles. Nissin uses a special triple layering process to get a smooth outer surface, with a firmer center that has a marvelous al dente texture. Also, unlike most packaged ramens on the market, RAOH Ramen is air dried (instead of fried), which helps the noodles retain the texture of fresh pasta.

P.S. This post was sponsored by our friends at Nissin, but as always, the opinions expressed are my own. 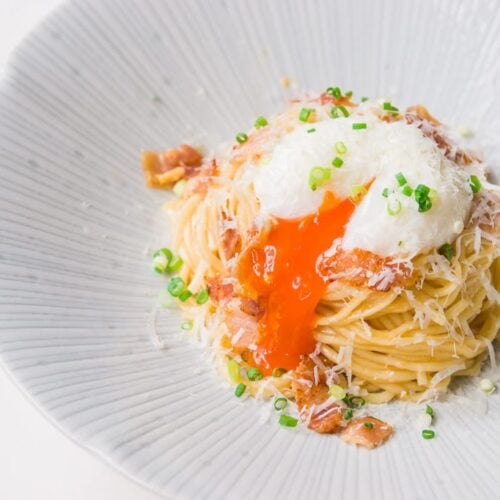 NOTES: Depending on how salty your bacon is, one full soup packet may be a little too salty. If you’re worried about this, just cut back on the amount of the seasoning you use from the soup packet (but you’ll still want to use both flavor packets). For the eggs in the sauce, please be sure to use pasteurized eggs as US eggs are not safe to eat raw. There are a few brands selling pasteurized eggs now, or if you have a thermal circulator, you can do this yourself by submerging the eggs in 135 F (57.2 C) water for 2 hours. As for the slow-cooked egg, if you don’t have access to a sous vide machine, a poached egg will work, or you can leave it out entirely.
Course Entree
Cuisine Italian, Japanese
Diet Low Sugar