I always find it a bit amusing how Chinese-American restaurants pad their epic menus by listing every permutation of every ingredient and sauce in their repertoire and then adding or subtracting one ingredient to make it a separate dish. Take sesame chicken (or beef/pork/shrimp/fish) for example. It’s essentially General Tso’s chicken, with sesame seeds instead of chili peppers. Although it’s a dish that doesn’t exist outside the English speaking world, it’s a perennial favorite in Chinese-American restaurants.

In case you’ve never had it, sesame chicken is like heavily battered fried saw dust that’s been drown in syrupy goop before being unceremoniously sprinkled with sesame seeds. To say I don’t like it would be an understatement, but as part of my series on reinventing Chinese-American cuisine, I decided to take a stab at turning it into a dish that I could enjoy.

My first problem with this dish is that the only sesame flavor comes from the addition of sesame oil. I dunno about you, but when I hear of a dish called “Sesame Chicken”, I expect a lot more sesame than a little flavored oil. To fix this, I decided to coat my chicken in sesame seeds. Unlike a battered coating, sesame seeds don’t absorb water as quickly so these stay crisp long after they’ve cooled off. In addition to forming a gloriously golden crust with a brittle crunch, the sesame coating gives the chicken plenty of nutty flavor. As an added benefit this makes the chicken gluten free (assuming you use gluten-free soy sauce)

The second problem is the meat. Since this dish is almost always made with breast meat, the frying often leaves the meat with a dry mealy texture akin to damp cardboard. While I was tempted to use thigh meat, I didn’t want to wander too far astray from the original and so I decided to “velvet” the meat. Velveting refers to marinating the meat in egg whites and cornstarch. Opinions vary on why this works, but I believe it has something to do with the the thickening abilities of both ingredients, which helps lock the chicken’s moisture in place.

Lastly, the cloyingly sweet sludge that’s used to sauce the chicken is like a sickeningly sweet motor oil that hasn’t been changed for a hundred thousand miles. Instead of using starch to make thick goopy sauce, I opted to let the sugar do the thickening. This keeps the sweet and savory sauce from becoming too cloying while providing ample viscosity to thoroughly season each morsel of meat. A small amount of sesame oil and vinegar added at the end fortifies the sesame flavor in the dish while lending a subtle tang that prevents the chicken from becoming too heavy.

The resulting dish looks unlike anything you’ve ever seen, with a marvelous crunch, deep earthy flavor and tender morsels of chicken seasoned with an almost invisible coating of sauce that lacquers rather than drowns. 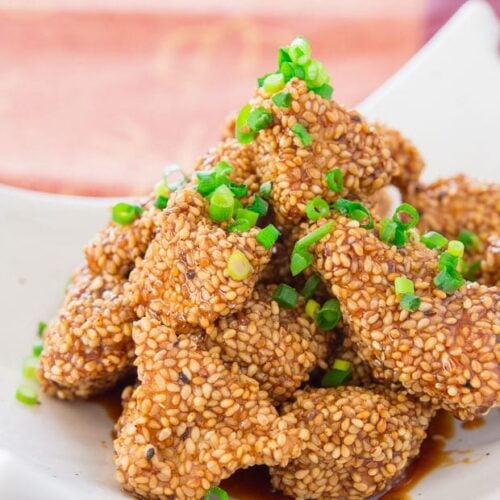 Notes When buying sesame seeds for this, be sure to buy ones that have not been hulled as it's the hull that provides the nice crunch. They're not always labeled, so look for seeds that are plump, opaque and tan in color. Hulled sesame seeds tend to be flatter, translucent, and cream colored.
Course Entree
Cuisine Chinese-American
Diet Dairy-Free