Originally a Chinese appetizer called Hatosi (蝦多士) or shrimp toast, this is a simplified version that makes for a great party canapé. Aside from a little cutting and spreading, they’re simple to prepare and are a tasty finger food that goes well with beer, wine or champagne

Each toast has a layer of crisp sandwich bread on one side, and ginger and scallion flavored minced shrimp on the other. Dipped in sweet Thai chili sauce these shrimp toasts are dangerously addictive!

There’s no need to buy expensive bread, in fact thinner (i.e. cheaper) bread works better because it absorbs less oil while frying and ends up light and crisp. The shrimp and pork spread that goes on top can be done ahead of time and frozen, so you can make a big batch and save the rest for later.

If you’ve exhausted your canapé repertoire between all the holiday parties this month, give these a try for New Years. Unless it’s a kosher party, they’re sure to be a hit! 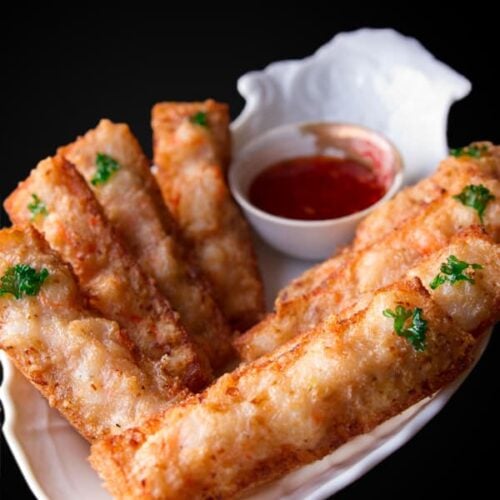 What do you think?55 Cancel reply