After a morning interview and an afternoon spent scouring Circuit City closeout sales, I was tired and not in a mood to cook. On my way home, I stopped at the Grand Central Market to pick up ingredients for a quick-and-dirty dinner that I figured wouldn’t be worth posting about.

After a brief scan through one of my favorite markets in Manhattan, I ended up with skate, tarragon, sausage, and sauerkraut. The thought at the time was that I could fry up the skate or grill the sausages and pair either with some potatoes I recalled having at home. I’m not sure if it was sweltering heat in the subway or the exhaustion setting in, but sausages seemed very unappetizing by the time I got home, so I decided to do something with the skate.

Skate is a type of fish that is in the same class as sharks, having a similar flat appearance to rays (as in stingrays). The parts you eat are the wings on either side of the body, which have a very distinctive segmented appearance and a texture similar to chicken when cooked. Because the fillets are so thin, they cook very quickly so it’s important to fry them in a very hot pan to get a nice brown crust without over-cooking them.

Rummaging through the fridge, I found a few Cipollini onions rolling around in the veggie drawer as well as a half bulb of fennel that had seen better days. Unfortunately there was nary a potato to be found. For a brief moment I started to panic, picturing the meager portion of skate on the plate devoid of any starch. I could have made pasta, but I was hungry and the whole boiling and draining thing seemed like more of a fuss that I was prepared to handle. Scanning the kitchen, my eye caught a glimpse of a gold and green bag of masa harina sitting on the counter. Tortillas would have been an odd pairing, but I started to wonder what kind of porridge the lime treated and finely ground corn would produce.

As it turns out, masa harina makes a fantastic porridge that’s much smoother and creamier than polenta, closer in color and texture to cream of wheat, but with the mild creamy flavour of corn. All I did was whisk some masa harina into a 50/50 mix of chicken stock and soy milk with a pinch of salt. As it’s heated, it starts thickening and the viscosity can be adjusted by cooking longer to thicken or adding more stock to thin.

Despite my every intention to make a quick simple meal, this turned into something rich and elegant that looked and tasted impressive, making it equally suited for a dinner party or a weeknight meal. The browned skate fillet is topped with onions and fennel that have been braised in wine and stock and finished with a tarragon beurre blanc. The flavours and textures all played very nicely together with juxtaposing creamy, tangy, salty and sweet elements with the fresh anisey tarragon providing some contrast both visually and on the palette.

Wine pairing: 2006 J Chardonnay (Russian River). A satiny smooth chardonnay with caramel and citrus on the nose and apples and lemon on the palette. With its round tannins and hint of oak, it made for a perfect addition to the sauce and an even better accompaniment to the finished dish. 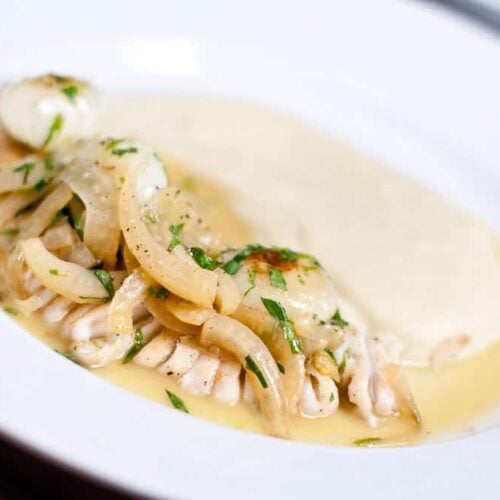 What do you think?44 Cancel reply