No matter where you are in the world, late summer likely brings with it an abundance of ripe tomatoes and tender cucumbers. That’s probably why some variation of this salad exists all over Eurasia and Africa. Add some sumac and green peppers and it’s a Turkish Çoban Salatası, add a dollop of sour cream and a sprinkle of dill and you’ll have a Russian cucumber and tomato salad (Салат с огурцами и помидорами), or spice it up with some cumin and mint for an Indian Kachumber.

With only a handful of ingredients, it may sound kind of boring, but with a mix of crisp and crunchy textures; and sweet, sour and savory tastes, this salad changes with a every bite. The key is to use tomatoes that were vine ripened to their peak sweetness and cucumbers that are young and tender.

Personally, I like using either Lebanese cucumbers or Japanese cucumbers because they tend to have less seeds, with a tender skin that doesn’t need to be peeled. If you can’t find either kind in your area, you can use English (a.k.a. hothouse) cucumbers, but you’ll want to remove the seeds with a spoon to keep the salad from getting watery.

I love the crisp texture and natural sweetness of raw onions, but they contain volatile sulfur compounds, which is the reason they have a potent flavor that can make you tear up. To tame them, I like to soak raw onions in a couple changes of water overnight. If you can’t wait that long, add a teaspoon of baking soda to the water. This helps neutralize the sulfur compounds, taking the edge off the onions in about an hour.

The salad may look rustic because of the chunky vegetables, but there’s a good reason for cutting them into chunks rather than slices. If you slice them thinly, the vegetables tend to weep a lot of liquid quickly, which will make your salad watery before you have a chance to eat it. 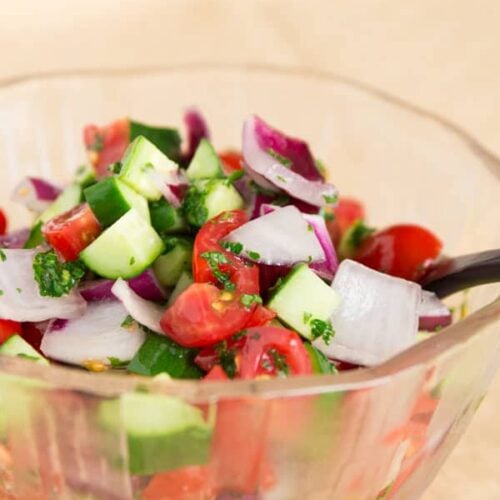