Call me a geek, but I’m a bit obsessed with the history of food. Contrary to popular belief, even the most “authentic” dishes are often influenced by ingredients or techniques from other parts of the world. That’s because the journey of food parallels the journey of humankind, taking unexpected twists and turns, which bring ingredients and techniques continents away from where they originated.

For Tonkatsu (豚カツ), it’s not entirely clear where the journey started, but deep-frying is not a native method of preparing food in Japan. The first written account of the dish is in a cookbook published in 1872 called Seiyou Ryouritsu (literally “The Western World Cookbook), which describes a breaded and fried dish called Whole Cutlet (フォールカツレツ – Fohru Katsuretsu). The first recorded appearance on a restaurant menu was at Rengatei in Ginza around 1899 going by the name of Pork Cutlet (ポークカツレツ Pohku Katsuretsu).

The timing coincides with the Meiji Restoration which brought with it the opening of trade with the West along with a constitution that was modelled after the legal structures of the German Empire. The English name suggests the British or the Americans introduced it, but the true origin of the dish is most likely the Austrian Wiener Schnitzel, or the Italian Cotoletta alla Milanese.

The name Tonkatsu didn’t appear until later and is a portmanteau of ton, which means “pork” in Japanese and katsu, which is an abbreviation of katsuretsu, the Japanese transcription of “cutlet”. Whatever its origins, Tonkatsu’s popularity has spread all over Asia with regional variations, such as in Korea, where it’s known as donkkaseu (돈까스).

Since this is a simple dish that only has a few ingredients, the quality of each ingredient matters.

The most important component is the pork, and you’ll want to splurge here on a tender cut with good marbling, that hasn’t been frozen.

I like using either a loin chop(leaner) or rib chop(richer), but be sure to look for one with even marbling and without much connective tissue like gristle. I also prefer my cutlets to be thick, as this helps to keep the meat from drying out as you fry it.

If you can afford it, I highly recommend using a heritage breed of pork such as Kurobuta, Berkshire or Iberico as these all have great texture and flavor with a decent amount of fat marbled into the meat.

One of the things that set Tonkatsu apart from other cutlet dishes around the world is the use of Panko. Panko is a Japanese-style breadcrumb made from the white part of sandwich bread, and it was originally made by shredding fresh bread, rather than pulverizing stale bread, which is why the crumbs are much larger than western breadcrumbs. For my Tonkatsu I used fresh panko (生パン粉 – Nama Panko), which is basically shredded bread.

If you can’t find it, you can make your own by removing the crusts from sandwich bread and shredding it by hand. The crusts need to be removed because they’ve already browned in the oven. If you make panko from a whole piece of bread, the crust parts will end up much darker than the white parts.

Japanese love their cabbage, and a plate of Tonkatsu is not complete without a big pile of shredded cabbage. You want to use the tender inner leaves of a head, removing the tough stems before you shred it. I also like to soak the cabbage in water, which not only crisps it up, it tames the funky cabbage smell to an extent.

To season the cabbage, I usually just pour some extra tonkatsu sauce on it, but it’s also delicious with some ponzu, or a light vinaigrette.

Tonkatsu sauce can be purchased from most Asian supermarkets, and I’ve even seen it in regular supermarkets in areas with an Asian population. If you can’t find it near you, try searching for it on Amazon.

If you still can’t get it, you can make a reasonable facsimile of Tonkatsu sauce by whisking together two parts Worcestershire sauce, one part ketchup, and one part honey.

How to Make Tonkatsu

Because this dish is so simple, there’s not much to it, but there are a few key points to remember.

First I like to season the cutlet with some salt and pepper because the sauce only seasons the breading. Next, a thin dusting of flour goes on to the surface of the pork, which together with the egg it gets dipped in, creates a glue that helps the panko adhere to the meat.

Once it’s breaded, all that’s left to do is to fry it, but there are a few things to keep in mind. The pork cutlets are quite thick, so if you fry it at a high temperature, the panko will burn before the meat is cooked through. That’s why I fry it at a relatively low 320 degrees F for a longer time. I’ve also found that the lower temperature keeps the meat juicier.

Finally, if you didn’t get the memo, the FDA revised the safe temperature of pork down to 145 degrees F a number of years ago, so you can stop ruining it by cooking it to 160. I like to fry my Tonkatsu until it reaches an internal temperature of 140 degrees F, and then let it rest for about 5 minutes. The carry-over cooking will cook the meat through, and the time will give a chance for the proteins to relax and the juices to redistribute, so don’t end up with a puddle of pork juice making your cutlet soggy when you slice it.

Traditionally Tonkatsu is served with a nest of shredded raw cabbage, hot Japanese mustard and a sweet and savory spiced fruit sauce called Tonkatsu sauce (トンカツソース). The cabbage provides a fresh balancing respite from the rich pork, while the sauce not only seasons the pork, it provides a delightful contrast in the same way that barbecue sauce takes ribs to the next level.

Another common way to serve it is with a generous blanket of Japanese curry on top. There’s something divinely satisfying about biting through the crisp golden panko into the tender, juicy pork while the sweet, spicy curry swirls around in your mouth. This combo is also one of the most well-loved comfort foods in Japan.

There are also regional and seasonal ways to eat Tonkatsu. For instance, in the Nagoya area of Japan, they eat Tonkatsu with a sweet miso sauce, and in summer Tonkatsu is often eaten with the refreshing combination of grated daikon radish and ponzu.

What to do with leftover Tonkatsu

Don’t be shy about frying up extra Tonkatsu because there are a ton of ways leftovers can be upcycled into other dishes. One of my favorites is Katsudon, which is a rice bowl topped with Tonkatsu that’s been simmered in dashi, soy sauce, sake, and onions, and finished with some beaten eggs it makes this divine omelet that’s saucy enough to season the rice underneath.

Another great way to use leftover cutlets is to turn it into a sandwich. You’ve probably heard of those ridiculously expensive Katsu Sandwiches sweeping the nation, and while many of those are made with beef katsu, the original Katsusando is made with Tonkatsu. 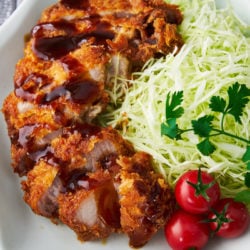 What do you think?123 Cancel reply

If you enjoyed watching this, please let me know by heading to my YouTube Channel and giving this a like👍🏽, Subscribing to my channel, and leaving a comment to let me know what you think. These videos take a ton of time to produce and hearing from you is the best motivation to keep me going.