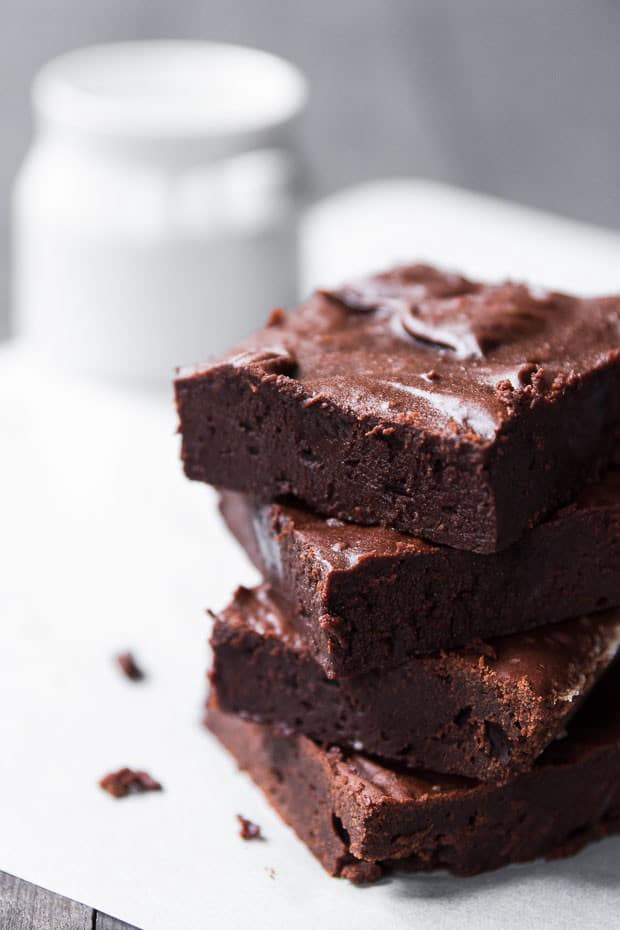 There are plenty of recipes out there claiming to be the “ultimate brownie”, but like most things in life, the qualities that make for the ultimate brownie are a matter of personal preference. I like my brownies, dense, chewy, sweet (but not heartburn inducing), and with robust chocolate flavor that packs a sensory wallop. With that in mind, I’m happy to tell you that I’ve found my ultimate brownie, and it all came together quite serendipitously.

I recently moved from Sapporo to Tokyo, and as with any long-distance move, I had to get rid of most of the food in the fridge and pantry. This is no simple task for most households, but in a pantry with ten different kinds of wheat flour, dozens of salts, and 2 pound bags of chocolate in various intensities, it presents a daunting challenge.

By the day before the move, I’d boxed up or thrown out all the easy stuff, and I had some tough choices to make. Amongst them was what to do with the remains of an open bag of Valrhona Caraïbe, a ramekin of vanilla caramel sauce, a few eggs, and the dregs of a bag of imported French flour. As I was about to toss them into a giant garbage bag, it occurred to me, that under different circumstances, these could be used to make a chocolate cake. That’s when I decided to throw them together and see what happens. I wasn’t sure what I’d end up with, but whatever it was, it couldn’t possibly taste bad.

Because the vanilla caramel sauce had been sitting in the fridge, it was rock solid, so I heated it up in the microwave, and then realized I could also melt down the chocolate in the molten caramel. The aroma the combination gave off was intoxicating and I was tempted to just consume the glistening chocolate with a spoon.

Curiosity piqued, I whisked in a few eggs and then folded in the flour. The resulting batter was thick like peanut butter and had a chewy consistency. After only a few minutes in the oven, the warm scent of vanilla, caramel and chocolate permeated every inch of the apartment, dripping with comfort. Despite the fact that my life was neatly packed and stacked into the boxes before me, I couldn’t help but smile with contentment.

What came out of the oven was nothing short of extraordinary and I knew in that moment I wanted to share it with all of you. Unfortunately I hadn’t measured anything at the time, which is why it’s taken me so long to post this.

Using quality chocolate is obviously important since that’s the main ingredient, but the real secret is the caramel sauce. The blend of caramelized sugar, butter, cream and vanilla beans in the sauce not only lends some incredible flavor to the brownie, it also changes the texture, giving the brownies a dense chewiness that is the stuff of dreams.

I know… using homemade caramel sauce and Valrhona chocolate for a brownie is ridiculous… but that’s exactly what a good brownie should be. Fudgy, with over-the-top chocolate flavor, a crisp glistening shell of sugar, and a mild chew… at least for me.

You can control the texture of the finished brownie by the length of time you bake it. The less you bake it, the more fudgy the brownie is, and the longer it spends in the oven the more cakey it gets. In my convection oven, 12 minutes gave a crisp sugary crust, a crumbly border region, and a center like a chewy ganache. Keep in mind that the brownie will continue to cook after you pull it out of the oven, so if in doubt, pull it a bit earlier. 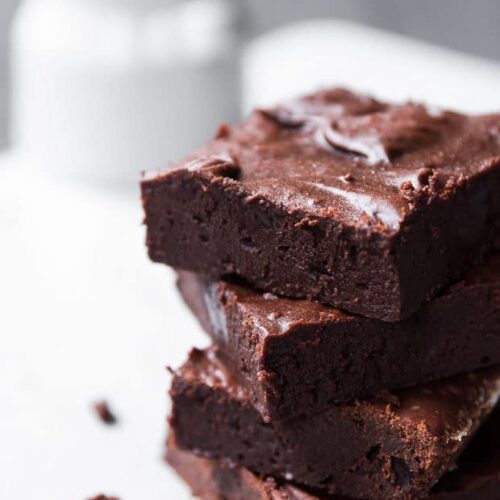