Vanilla extract is as easy to make as dropping a few vanilla beans into a bottle of vodka. I like using single serving minibar bottles of various types of alcohol so you have different flavors of vanilla that don’t take a lot of space.

On my trip to Bali late last year, I picked up a bundle of a few dozen vanilla beans for about $5 USD. If you’ve ever dropped a Hamilton on a jar holding a lonesome vanilla bean, you can probably imagine how excited I was about my find. Delighted with the luxury of being able to use an entire bean without thinking about cost, I’ve been scrapping the seeds into everything from breads to soups to jam. It wasn’t until I went to bake a cake when I realized that the sticky seeds don’t want to disperse evenly unless you really give them a good whisk; and we all know what happens when you overmix cake batter!

That’s when it occurred to me that this was probably the reason vanilla extract was invented. Palm firmly planted on forehead, I headed straight to the closest liquor shop to pick up some hooch to extract the essence from the shiny black beans. Standing, among rows upon rows of bottles, I couldn’t decide what liquor I wanted to entrust my treasured vanilla to.

Before I knew it, I’d loaded my basket with over $70 worth of premium booze, resolving to test which one produced the best vanilla extract. As I headed to the cashier, I noticed a rack of mini bottles of liquor (you know, the kind they serve on airplanes, and that they overcharge you for in the minibar of a hotel). Given how little I bake, nearly 2 liters of vanilla extract seemed like an awful lot to make, especially given that I’d never done this before.

Back went the full-sized bottles and in went mini bottles of bourbon, and vodka. Back at home, I took a swig out of each bottle (just to make sure they were still okay), and split two vanilla beans, putting a whole bean in each bottle. Every day, the color of the liquor got darker, and every day I cracked open the lid to take a sniff. At first, the sharp tang of high-proof alcohol and potent vanilla bean was all I could smell, but over the course of a week, the two aromas merged, mellowing each other out and bringing forth a subtle complexity reminiscent of a fine scotch. As with a scotch though the flavor continues to improve over time, and as you can see in this series of photos, the color goes from a light tan to a ruddy brown.

While the vanilla flavor was more pure in the bottle made with vodka, bourbon and vanilla are more than the sum of their parts. The sweet aroma from the bourbon vanilla made me want to dab a little behind my ears and pour the rest of the bottle over a giant ice cube and sip it.

Next time, I may just go and buy a full size bottle of Bulleit and add a handful of beans for drinking, but for cooking, the mini bottles are perfect. Unless you run a bakery, you’ll probably never be using more than a few teaspoons of vanilla extract, and so the mini bottles make it easy to measure out without spilling a precious drop.

By the way, if you’re not going to be in Bali anytime soon, there’s a store on Amazon selling vanilla beans. I’ve never bought from them so I can’t vouch for their quality, but if someone does buy them, please leave a note in the comments here to tell us how they are. 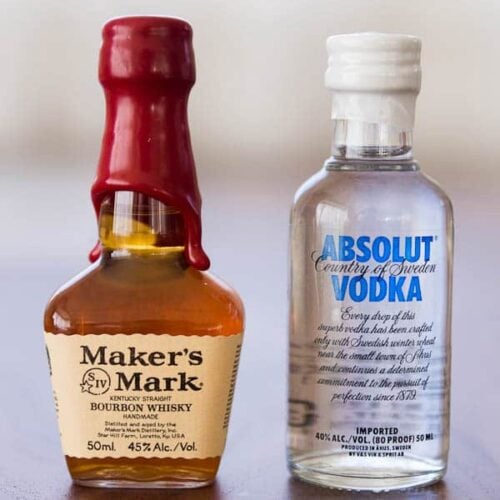 Recipes in your inboxDon't miss out SIGN UP!
Course Basics