Because the seafood at my local grocery store is often either too old, or too expensive I don’t buy a lot of fish. I do swing by the seafood counter between the produce and the cheese though because every now and then, they have something truly special. Today was one of those days. They had a display of beautiful whole red snapper nestled in fresh chips of ice and it was on sale for $10.99/lbs! Honestly, I was sold after seeing their clear eyes and blood red gills, but the sale price triggered some sort of thrifty Asian reflex and I had a freshly scaled and gutted whole snapper sitting in my basket before I knew what to do with it.

With truly fresh seafood, I love simple preparations. Olive oil salt and pepper were the first thoughts to enter my head, but since red snapper isn’t the most flavorful fish, I wanted to give it some kind of sauce. Luckily, I’d also stopped by the Union Square farmer’s market and had some beautiful tomatoes, sunchokes and asparagus sitting at home.

The image I had in my head was something like an Acqua Pazza, but I wanted more veggies and less water. Because different vegetables require different cooking times, I divided them up. The sunchokes were parboiled so they’d cook all the way through during their short stint in the oven. The onions and fennel were sauteed along with garlic, to soften them and get a little Maillard reaction going. The tomatoes went in with the fish, and the asparagus was sprinkled on during the last few minutes of roasting.

What came out of the oven was a perfectly cooked melange of veggies that acted as both sauce and side dish for the fish. I topped the dish off with some chopped mint because I thought it would go nicely with the fennel (and it was the only fresh herb in the fridge), but this would also be great finished off with basil, parsley or rosemary.

The snapper and veggies come together as a sweet and savory dish, permeated with the aromas of caramelized onions and fennel, sun ripened tomatoes, and accented by some green notes from the bay leaf and mint. It’s light, flavorful and simple and yet it makes for a great party dish because of the fun presentation.

This recipe makes enough sauce for 2 fish, so if you need to feed 4 people it’s a simple matter of adding a second fish before roasting. 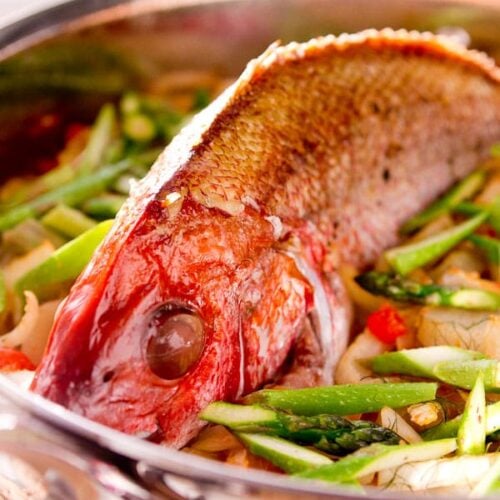 What do you think?20 Cancel reply