Having grown up in a small agricultral community in California where mobile taquerias set up shop along the main thoroughfares each evening, I thought I knew Latin American food. It wasn’t until I went away to college and I had my first Cuban meal that I realized how little I knew.

After moving out to the East Coast, where it’s almost impossible to find a decent taco, but Ropa Vieja and Chatinos abound, I quickly became enamoured with la cocina Cubana. Mild and comforting, yet with such a vibrant array of textures and tastes, eating Cuban food made me feel alive on dreary days in the concrete jungle. Fast forward a couple of years and I traded in one big city for another, located on the other side of the world. While the Japanese do some cuisines exceptionally well, Cuban isn’t one of them.

That’s why I decided that if I want to have Cuban food, I’d have to make it myself. My first project was to perfect a Picadillo. Originally a Spanish dish, Picadillo made its way to all of Spain’s colonies, but for me it will always be intertwined with the cuisine of Cuba.

A tender hash of beef, cooked in wine with warm spices like cumin and cinnamon, and an abundance of umami from a sofrito, the beauty of Cuban Picadillo is that it avoids the trap of monotony with the addition of tart salty olives, plump sweet raisins, and waxy potatoes. Each bite brings with it a completely different concoction of textures and tastes which will keep your fork going back for more.

I know I’m always harping on about the importance of browning meat to build flavors, but in this rare instance I’m going to tell you to ignore that advice. It’s not that the advice is wrong, it’s just that it comes at the cost of making the meat tough. Instead of relying on the beef to build a backbone of flavor, Picadillo is built upon a sofrito of onions, peppers and garlic, which is why it’s super important to fully caramelize your sofrito.

Traditional recipes call for a splash of vinegar at the end, but I like hitting my picadillo with the brine from the olives. It adds the requisite tartness while imparting an additional blast of umami that rounds out the dish at the end. 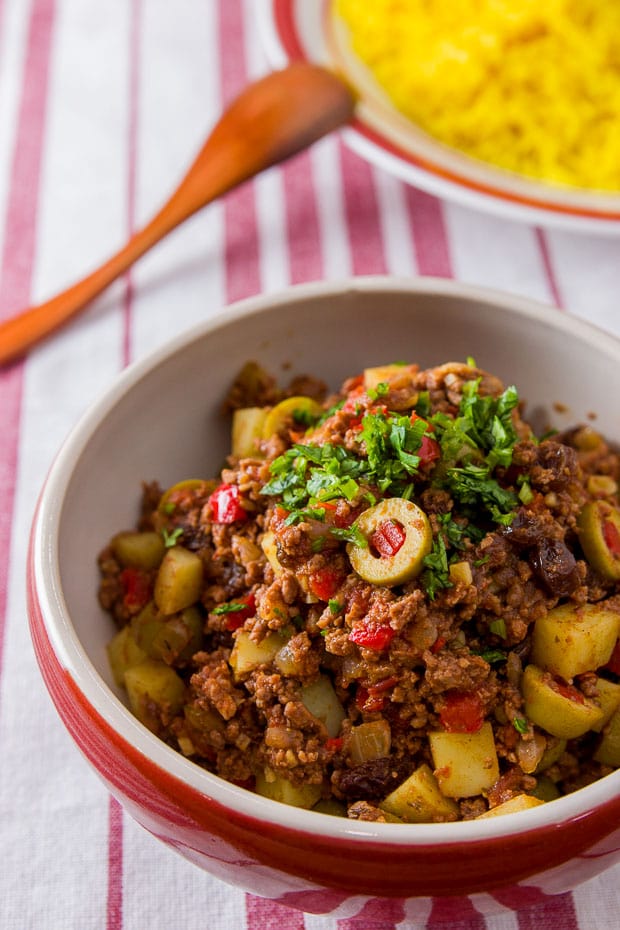