Spaghetti with Meat Sauce is one of those global comfort foods that moms around the world make for their kids. Although the sauce and pasta have roots in Italy, it didn’t come together as a dish until Italians started migrating to other parts of the world.

These days, people are busy, and I get the temptation to use the pre-made stuff from a jar, but making it from scratch doesn’t take that much more work, and it’s SO much better. Meat sauce also freezes well, so if you’re really pressed for time, you can make a big batch of this on the weekend, portion it, and freeze it to reheat and toss with freshly boiled spaghetti on a weeknight.

What are the ingredients for Meat Sauce?

Broadly speaking, spaghetti sauce has three main components, the aromatics, the meat, and the liquids.

How to Make Spaghetti With Meat Sauce

Water takes a while to boil, so I always start by putting a large pot of salted water on to boil.  I usually add 1 tablespoon of table salt for every gallon of water. This ensures each strand of pasta is well seasoned.

Any kind of spaghetti will work, but spaghetti comes in thicknesses ranging from 1.4mm to 2.2mm thick. Thicker noodles take longer to cook, while thinner noodles will take less time, so check the package to figure out the right amount of time to boil the pasta. I usually boil it for 1 minute less than what the package says and then finish cooking it in the sauce.

This allows the pasta to absorb some of the moisture from the sauce, which not only infuses the noodles with flavor but it also further thickens the sauce. In fact, the sauce can get too thick, so I always keep about a half cup of the pasta liquid before draining it, so I can add it in at the end if the spaghetti starts sticking together as I mix it with the sauce.

The first step to making any great sauce is to caramelize the aromatics. This is a process that can normally take up to an hour to do properly, but by cutting the aromatics small, adding some baking soda, and steaming them covered with a lid, we can reduce this down to around 13 minutes.

Amongst its many superpowers, baking soda has the ability to break down the aromatics, which makes them cook faster and eventually dissolve into the sauce as if they’d been cooked for hours. It also raises the pH of the mixture, which speeds up both caramelization and the Maillard reaction. Both of these browning reactions lead to the creation of new flavor compounds, which take pungent, spicy onions and turn them into mellow, sweet flavor bombs.

Once the garlic, onions, carrots, baking soda, and olive oil mixed together in a pan, I cover it with a lid before turning on the heat. This traps the steam escaping from the vegetables. Since water vapor is much more efficient than air at transferring heat to the aromatics, it makes them cook through much faster.

After about 10 minutes of steaming, you can remove the lid and boil off any remaining liquid, while allowing the aromatics to caramelize in a matter of minutes.

Then, I add the beef and pork and crumble them up a bit with a spatula before adding the wine. You want to add the wine to the meat before it’s fully cooked as the liquid keeps the ground meat from getting tough (which would require a lot of time to tenderize).

Finally, the tomato puree, ketchup, oregano, salt, and pepper get added, and I cook this together over medium heat to get it to reduce quickly. You should be able to get the sauce to the right consistency in under 10 minutes. Still, it’s important to stir it continuously, which not only prevents the sauce from burning, it also speeds up the evaporation of excess liquid. You can tell when the sauce is done when you can scrape a spatula along the bottom of the pan, and the sauce takes a moment to fill in the gap.

What’s the history of Spaghetti with Meat Sauce?

Like most things in food lore, it’s unclear exactly where Spaghetti with Meat Sauce was created, but one thing that is certain is that it did not originate in Italy. One theory suggests that it was created in the US about 100 years ago when there was a large influx of Italian immigrants. Between 1880 and 1924, more than four million Italians emigrated to the US, many of them from the south of Italy. This is an important clue because although Meat Sauce is often called “Bolognese” (named after a city in the north), the preparation and ingredients are actually closer to a Neapolitan ragù, which comes from the southern city of Naples (which is also where pizza was born). 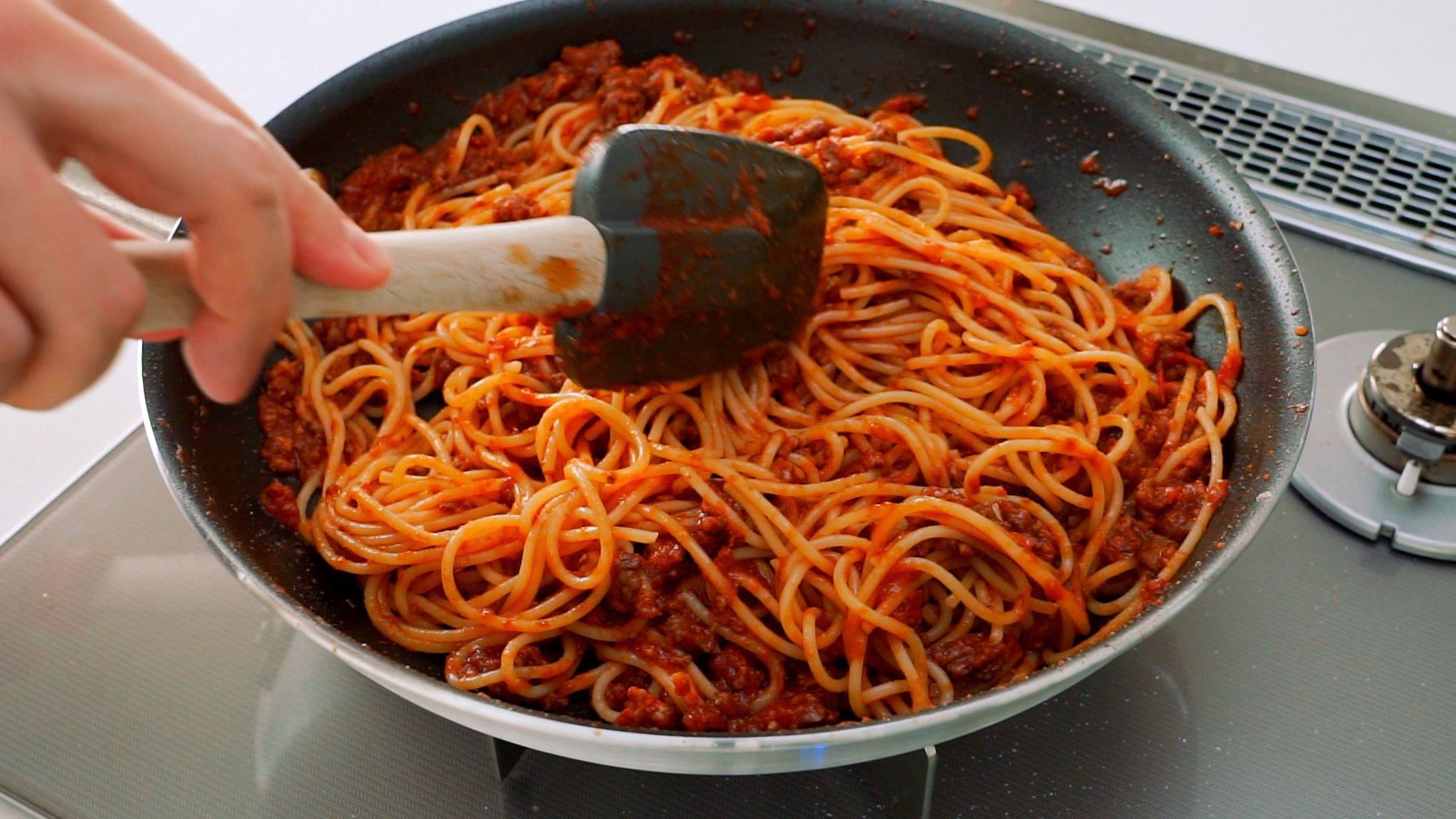 What’s the difference between Meat Sauce and Bolognese?

Although the two terms are often used interchangeably, Bolognese refers to a meat sauce in the style of Bologna, Italy. It’s made from minced beef and pork, along with a soffrito, milk or cream, and a small amount of tomato, which is slow-cooked for hours. Traditional Ragù alla Bolognese from Bologna is almost always served with Tagliatelle or some other wide flat pasta, not spaghetti.

Can I meal plan Spaghetti with Meat Sauce?

Spaghetti  is the perfect dish to meal plan as you can make a large batch of the sauce and then heat it up and toss it with freshly boiled pasta for a meal that can be assembled in under ten minutes. One batch of this is enough to make 2 large servings, so just multiply the sauce ingredients for the number of people you’re feeding and the number of meals you want it for. Be aware that if you increase the amount significantly, the caramelization and simmering steps may take a bit more time. 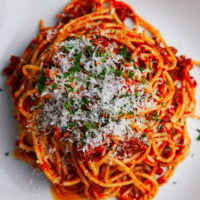