Some things were made to be together: Big Bird and Mr. Snuffleupagus, peanut butter and jelly, and the color red on a Ferrari are a few classics that come to mind. Whether you live in Boston, Bordeaux, or Beijing, you’ve probably sprinkled some pepper on your beef at one time or another, and it’s a combo that works famously well. I love this Chinese take on peppered steak because it features the bold flavor of black pepper front and center. With big savory chunks of beef, sweet onions, and crisp green peppers coated in a glaze of oyster sauce, Black Pepper Beef has a satisfying balance of tastes, textures, and colors that are sharply accented by the smoldering heat of the crushed peppercorns.

This mashup between a Western steak and a Chinese stir-fry cuts back on the amount of meat you use. Still, the bite-sized pieces of steak are caramelized and savory on the outside and tender and juicy on the inside. It’s precisely the kind of dish I crave when I have the occasional itch for steak. Best of all, there’s no need to fuss over cooking a thick slab of meat to perfection. Since the vegetables are included, they’re loaded with flavor, and you only have one pan to wash at the end.

How to Make Beef with Chinese Black Pepper Sauce

The first thing you want to do is crush the black peppercorns. You can do this using either a mortar and pestle or put them in a heavy-duty bag and pounding them with a heavy object, like a rolling pin or pot.

Next, you can make the black pepper sauce by whisking together the crushed black pepper (save a little bit for garnish), oyster sauce, Shaoxing wine, soy sauce, and sesame oil in a bowl. If you’re making a large batch of sauce and storing it, you can stop here and bottle it up. However, if you’re continuing on with the stir-fry, mix in the potato starch until there are no lumps.

Add the cubed beef to the marinade and mix it all together. Let this rest while you prep the garlic, onions, and peppers.

Once you have all the ingredients ready, heat a frying pan over medium-high heat until it’s hot. Add the oil and garlic and give it a few stirs before adding the beef in a single layer using tongs or chopsticks. You want to try and leave as much of the marinade behind in the bowl as possible, so don’t just dump everything into the pan.

Once the beef has browned on one side, flip the cubes over and brown the other side.

When the beef has browned on at least two sides, add the onions and bell peppers and stir-fry the mixture until the onions start to turn translucent. Add the remaining black pepper sauce and toss everything together until the sauce has thickened around the beef and veggies.

Plate the black pepper beef, and you can garnish it with some additional crushed black pepper.

What kind of black pepper should I use?

You could make a big batch of this sauce and store it in a sealed container in the fridge for months. If you plan on storing it, I don’t recommend adding the starch (you can add it in when you use it). This also makes the sauce more flexible as you don’t always want it to contain starch.

What can I use Chinese Black Pepper Sauce for?

Aside from stir-fries like this, the sauce is also a fantastic marinade for grilled chicken and steamed fish. I also like to use this for making stir-fried noodles, but if you’re using it for noodles, be sure to omit the starch.

Why do chili peppers and black pepper both have “pepper” in their name?

Although the two peppers are not related, they share a common history. Black pepper made its way to Europe first through the spice trade and became a popular seasoning for its ability to bring foods to life with its creeping heat. Due to its limited supply, black pepper became such a sought-after commodity that it was worth more than gold by some accounts. When explorers started bringing chili peppers back from the Americas for their decorative qualities, it didn’t take long for people to figure out that the colorful fruits also had the ability to spice up food. What started off as a culinary knock-off of black pepper has taken on a life of its own in kitchens worldwide. 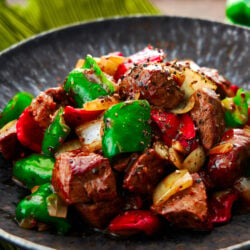