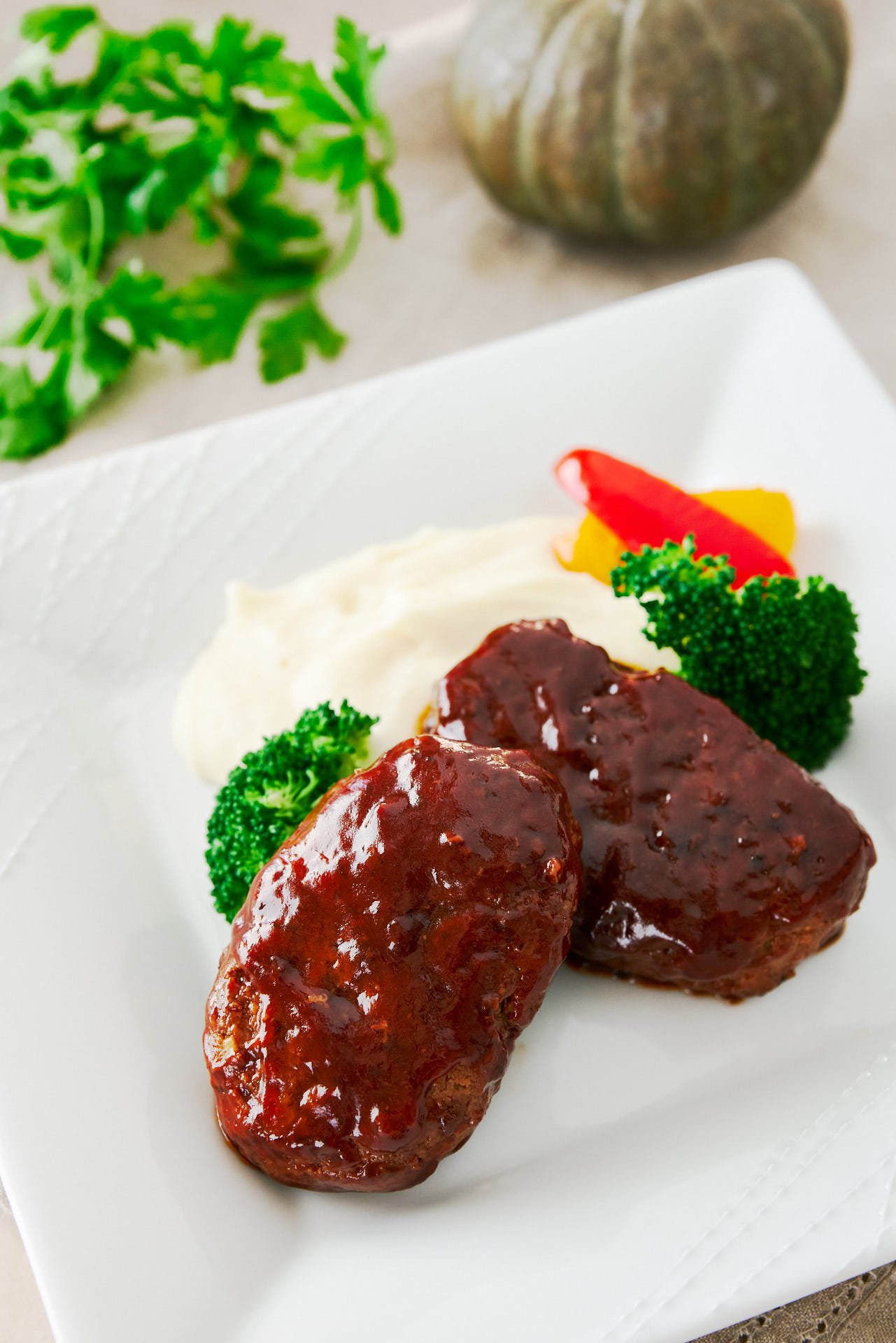 If Hambagu sounds a bit like Hamburger, that’s because they both evolved from a common ancestor. The name “Hambāgu” (pronounced hahm-bah-goo) is a transliteration of the German city of Hamburg, a port, through which many Northern European emigrants passed through. In the mid 19th century the influx of Germans prompted restaurants in New York to start selling a “Hamburg-style Steak.” In the US this later branched off into Salisbury Steak, which is served with gravy, and the world-famous Hamburger, which we all know is served in a bun.

So when did Hamburg Steak come to Japan? When it came in, and who brought it in is a mystery, but one clue lies in the name used for early versions of this dish: German Steak (ジャーマンステーキ). Since a German would likely have called it a “Deutsches Steak” my guess is that it either came through the US or England after the Meiji Restoration (1868).

This milestone in Japanese history marked the restoration of the practical rule to a young Emperor Meiji and the end of its isolationist foreign policy. In addition to an influx of foreigners (and with them foods), attitudes about eating meat began to change, and western-style meat dishes became more popular, particularly in urban areas. With the introduction of mechanical farm equipment in the early 20th century, cattle started losing their place as workers on farms and increasingly found themselves on the menu.

Until the 1950’s Hambagu was mainly limited to western-style restaurants called Yōshokuyasan (洋食屋さん), but the maturation of food processing technologies expanded the reach of this high-end favorite into ordinary households, cementing its place as a staple of Japanese home cooking. 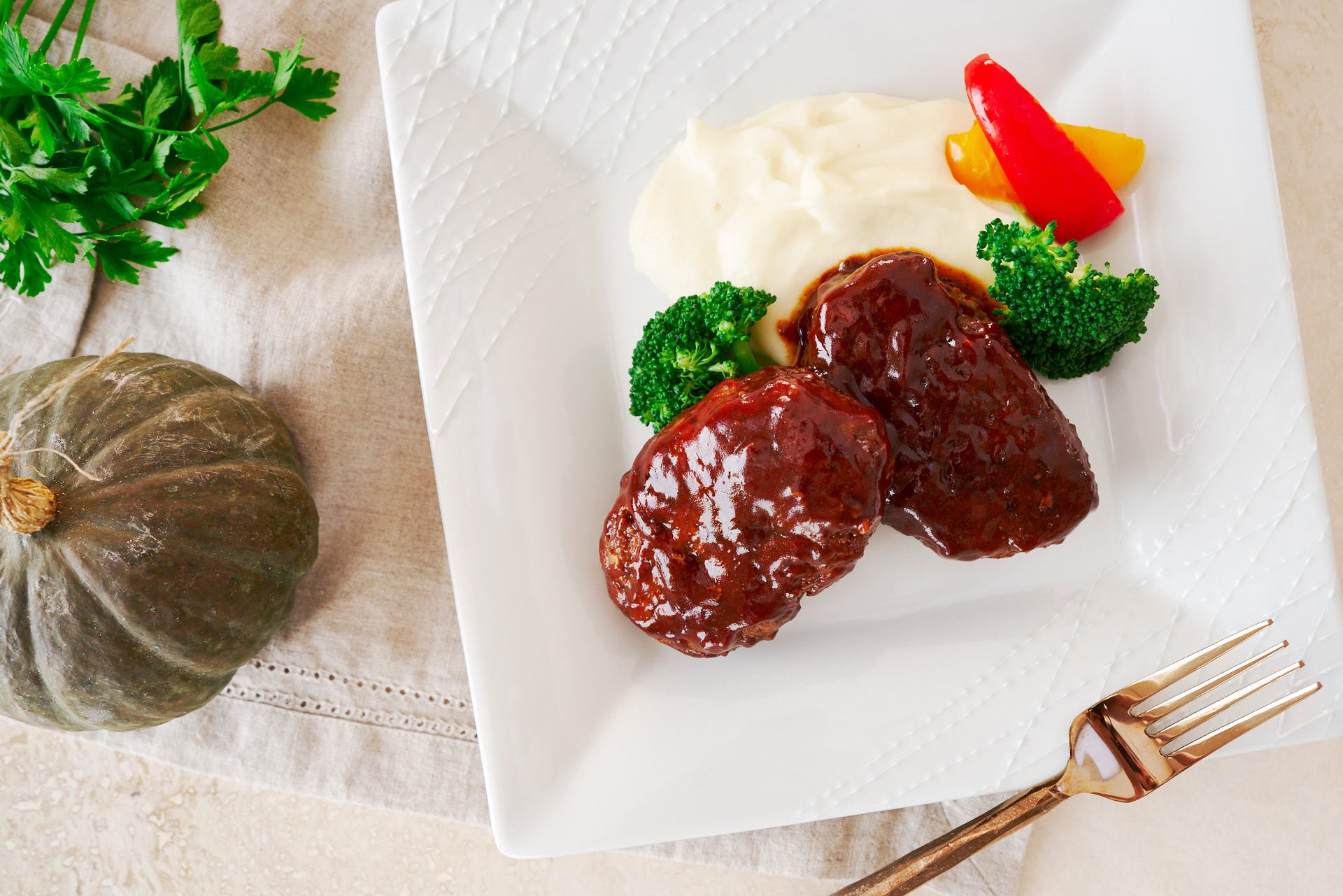 Being a staple of home cooking means that Hambagu is very easy to make, and the relatively small form-factor makes it cook much faster than a meatloaf without having to use the oven. Although the process is simple, there are a few key ingredients and techniques that make the difference between a tender, juicy flavor-bomb and pasty, dry hockey puck.

In Japan, a blend of ground pork and beef is often used because beef is costly in Japan. Although less expensive than whole cuts, ground beef can still cost more than $14 per pound. Pork, on the other hand, comes in at a more affordable $4 per pound. That’s why most supermarkets sell aibiki (合い挽き) which means “mixed mince.”

Premium restaurant-style Hamburg Steaks are almost always made with 100% ground beef. For me, Hambagu is about big beefy flavor, which is why I’ll splurge and make all beef patties. Luckily for those of you in other countries, it’s also an economical variety of meat.

When choosing your ground beef, be sure to get one that’s not too lean, you also don’t want one that’s too fatty. I usually like to go with hamburger meat that has about 20% fat for a rich, flavorful Hamburg Steak that’s not overwhelmingly fatty.

The traditional method of making Hambagu is to add sauteed onions to the meat mixture for flavor. In addition to onions, I also like adding just a bit of garlic.

In past iterations of this recipe, I had you caramelize half of the onions and adding the other half raw, but lately, I’ve been using a much simpler method of preparing the aromatics that still tastes great. Instead of caramelizing the onions (which takes about 15-20 minutes), I pop them in the microwave for about 4 minutes. This gets them tender and sweet, and you’ll still get some caramelization when you pan sear the patties.

Italian meatball recipes often call for adding ricotta cheese. Likewise, American meatloaf and many Japanese Hamburg Steak recipes call for adding milk or cream to the mixture. While it may sound odd to add dairy to meat, these ingredients add liquid and fat to the meat mixture making them juicier and more flavorful.

In my testing, I’ve found that adding a small amount of soft tofu (the silken kind) to the mixture helps keep the patties moist without adding very much fat. If you’re worried about them tasting like tofu, fear not, you can feed these to a tofu hater, and as long as they don’t see the carton in the trash they’ll have no idea they were eating bean curd! 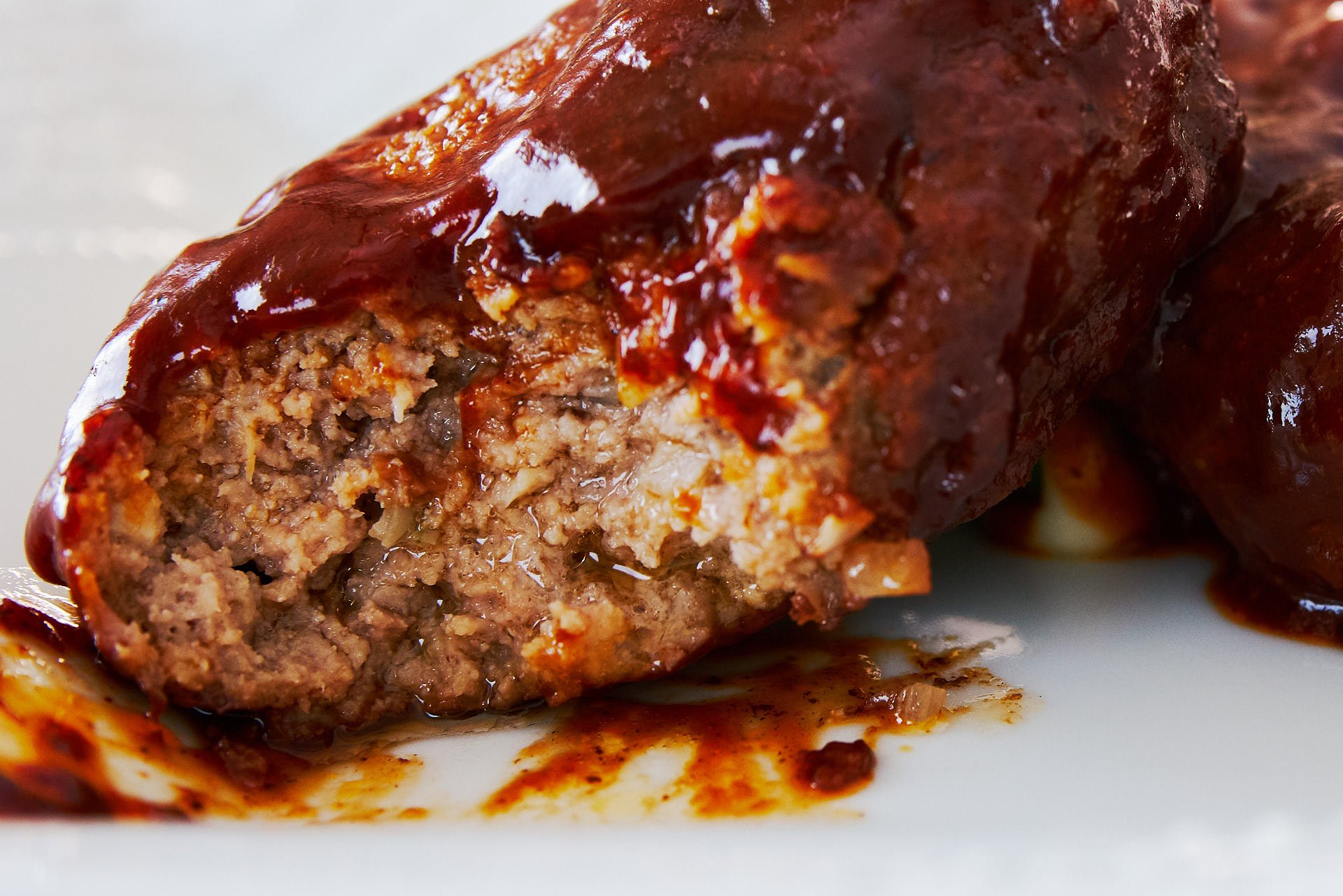 The breadcrumbs serve two purposes. The first is that they make for a great sponge, absorbing all the meat juices, so they don’t leak out of the patties and into your pan. Then, when you bite into your Hambagu, the breadcrumbs release their reservoir of beef juices into your mouth. The second benefit is that juice-saturated breadcrumbs are tender and won’t get hard when cooked. The proteins in meat, on the other hand, will seize up, expelling their liquid and making the meat hard. Since the breadcrumbs are there to soak them up, this keeps the Hamburg Steak tender as well.

In fancy restaurants, they make a demi-glace based sauce that includes a reduction of beef stock and red wine. Although this style of sauce is loaded with umami, it’s a lot of work, and to be honest, I like the balancing sweet and tangy flavor of a homestyle sauce for hamburg steak.

I’ve found a good middle ground by using an uncoated pan to sear the patties. This allows the juices escaping from the meat, to caramelize on the bottom of the pan, forming a nice thick layer of fond. The red wine that gets added for steaming deglazes the pan, releasing all that beefy goodness into the sauce.

Ketchup, chunou sauce and oyster sauce are the other ingredients I use to finish off the sauce. I know some elitist food snobs may thumb their noses at the idea of adding ketchup, but it has the perfect mix of sweet, tangy and savory flavors for this sauce and saves the trouble of recreating this taste from tomato paste, vinegar, and brown sugar.

Chunou sauce is a Japanese fruit-based sauce that’s similar to tonkatsu sauce with a sweet and tangy flavor that’s mildly spiced with cloves, cinnamon, and allspice. It’s like a sweeter thicker Worcestershire sauce, which is why you can substitute a 50:50 mixture of Worcestershire and ketchup in its place if you can’t find it near you.

As for the oyster sauce, this is an addition I made to amp up the umami. Together with the caramelized beef juices on the bottom of the pan, it quickly creates the kind of depth and umami that usually takes hours of reduction to achieve. The result is a robustly flavorful sauce that’s brimming with umami and maintains a delicate balance between savory, sweet and tangy that’s a perfect compliment to the rich Hamburg Steaks.

If you want to do it Japanese style, you’ve gotta serve Hambagu with rice, but I also love Hambagu on a bed of creamy mashed potatoes. For a fun take on an American-style hamburger try serving these on a bun.

I know this recipe makes a lot, but don’t be afraid of making a big batch so that you have leftovers. They can be reheated gently without drying them out, and they’re also delicious at room temperature, which is probably why Hamburg Steak is one of the most popular bento items in Japan. 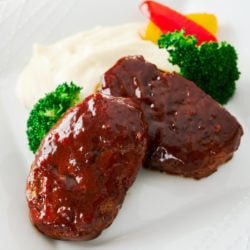 What do you think?87 Cancel reply