Gyudon (牛丼), which translates to “beef and rice bowl” is one of the most popular lunchtime meals in Japan. There are almost 5000 restaurants specializing this Japanese beef bowl scattered around Japan which is almost double the number of McDonalds here.

My Gyudon recipe is based on the style popularized by Yoshinoya, with tender flavorful beef and sweet onions cooked in a savory sweet sauce, which percolates down into the rice underneath.

To make an authentic Gyudon taste, you need to use a cut of fatty beef. This not only keeps the thin slices of beef moist, but the fat itself also contributes a smooth richness to the sauce. Yoshinoya is famously picky about their beef and only uses short-plate from American beef. They created a stir in 2004 when the BSE scare (and the ensuing ban on US beef in Japan) caused them to replace their iconic beef bowl with a pork bowl. For context, this would be akin to McDonald’s halting sales of hamburgers in the US and replacing them with chicken burgers.

As stocks of cheap US beef disappeared, Yoshinoya’s competitors Matsuya and Sukiya responded by sourcing beef from other countries, but Yoshinoya stubbornly refused to compromise on quality and price, sticking with pork until the ban was lifted over two years later. While some consumers simply switched brands, some loyal Yoshinoya fan’s went to the lengths of visiting the chain’s foreign locations to enjoy their beloved Gyudon.

Short-plate can be a bit hard to find, which is why I like to use boneless short ribs for my Gyudon. It tends to have good marbling and is a little more tender than short plate. If you live in an area where Philly Cheesesteaks are popular, this is the another good option as the meat is sliced very thinly. Regardless of what cut of beef you use, it’s crucial to slice the meat thinly against the grain. This is what makes it possible to cook the meat for such a short amount of time and yet still have it come out tender. If you’re friendly with your local butcher, you can try asking them to cut it for you on a meat slicer, or you can lightly freeze the beef and then use a very sharp knife to slice it into sheets that are about 1/16 of an inch thick (~1.4mm).

I’ve tried a bunch of different types of onions here including Welsh onions, and leeks, but I always end up going back to plain old yellow onions. That’s because they tend to hold their shape the best. Juicer varieties such as sweet onions, tend to turn to mush when you cook them for too long, and red onions discolor, taking on an unappetizing grey appearance.

Because Gyudon originated as a hotpot, it’s prepared in a similar manner; with the beef and onions cooked in a savory sweet broth. I like making mine with a combination of dashi stock, white wine, sake, soy sauce, and sugar. The white wine contributes just a hint of acidity while adding a fruitiness that brings out the sweetness of the onions. The sake adds plenty of umami, and the soy sauce seasons the broth.

If you’re a die-hard Yoshinoya fan and want to get the same taste, you’re going to need to use Hondashi granules (which contains MSG) to make the dashi. Personally, I find this a little heavy-handed, resulting in an artificial taste. That’s why I prefer to use a batch of dashi prepared using my homemade dashi recipe.

While purists, tend to prefer their Gyudon unadorned, I like adding toppings such as benishōga (red pickled ginger), scallions and sesame seeds, which contribute layers of texture and taste. Here’s a list of some of my favorite condiments for Gyudon:

How to Make Gyudon

The first thing you want to do is make the sauce for the Gyudon by adding the dashi, white wine, sake, soy sauce, and sugar to a frying pan. Then you want to add the sliced onion and cook it for a few minutes until the pieces start to become translucent.

Then, the sliced beef goes into the broth. Turn down the heat gently simmer the meat for about ten minutes, or until the beef is tender.

Serve the beef and onions over hot rice with some sauce drizzled over everything. Garnish the Gyudon with your favorite condiments such as chopped green onions, toasted sesame seeds, or pickled red ginger.

Gyudon literally means “beef rice bowl,” and it’s a type of donburi made with thinly shaved beef and onions simmered in savory-sweet dashi broth. Because the beef is sliced paper-thin, it releases its flavor into the broth and becomes tender quickly. The combination of beef and broth gets poured over a bowl of hot rice and topped with various condiments.

How to Pronounce Gyudon?

Gyudon is a 2-syllable name pronounced as follows (read the italicized parts).

These days Japan is famous for Wagyu beef, but using cattle for food is a relatively new concept that only dates back to the latter half of the 19th century. One of the first areas to welcome foreigners was Tokyo, which is why it’s no big surprise that Gyudon got its start there.

As with most new ingredients that work their way into a culinary culture, beef was initially in a way that was familiar to Japanese people: as a hotpot (鍋 – nabé). The new dish became known as Gyunabé (牛鍋), and it was the precursor to modern-day Sukiyaki, Shabu Shabu, and Gyudon. In the latter part of the 19th century, enterprising vendors started selling gyunabe on top of a bowl of rice as a kind of fast food, and it was called Gyumeshi (牛めし – “beef rice”). 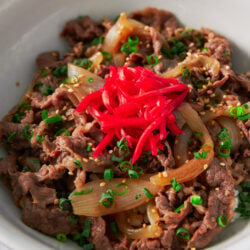 What do you think?29 Cancel reply