This Beef Rendang was one of the dishes I learned how to cook one rainy afternoon at Russel Wong’s home (yes, the Russel Wong from Bourdain’s Singapore espisode). His wife Judy can cook about as well as Russel can shoot a portrait, after an afternoon sweating over a wok, we were sitting down with friends to an eight course feast in Russel’s photo studio. While it was tough picking a favorite dish from that night, I found myself going back to the Rendang more than any other dish.

The flavors of Beef Rendang unfold in layers, like a stick of Willy Wonka’s three-course-dinner chewing gum. First there’s the zingy flavors of lemongrass and ginger, then comes the savory beef along with a torrent of chili, finally, as you continue to chew you start tasting the creamy coconut milk towards the back of your tongue.

Throughout the Rendang lesson, Judy hammered home two things: 1) Rendang is not rendang if it has a sauce 2) Rendang always tastes better the next day.

That’s because Beef Rendang was originally created as a method of preserving meat. Before refrigeration was available, when wealthy Minangkabau farmers dispatched a cow for a special occasion it was often turned into Rendang. With its blistering spiciness (capsaicin is an antimicrobial), low moisture content and high fat content, Rendang provided a way to make the kill last for weeks in the sweltering Indonesian heat.

First a spice paste is fried to bring out the flavors, then the meat is braised with the spice paste and coconut milk, then after nearly all the liquid has evaporated, the remaining sauce is caramelized by frying it in the oil that the meat released during braising. This creates an extremely flavorful coating on the outside of the beef, which eventually absorbs back into the meat, making Rendang improve in flavor over time.

For those of us who aren’t lucky enough to be able to head down to a local shop and pick up fresh coconut milk (or lack the patience to grate the coconut and extract it ourselves), I’ve found a good alternative that beats the canned stuff. It’s a coconut powder created by spray drying fresh coconut milk, a process that rapidly removes the liquid preserving the flavor profile of fresh coconut milk. It’s sold in 50 gram packets by a company called Kara and makes about 1 cup of coconut milk per pack. 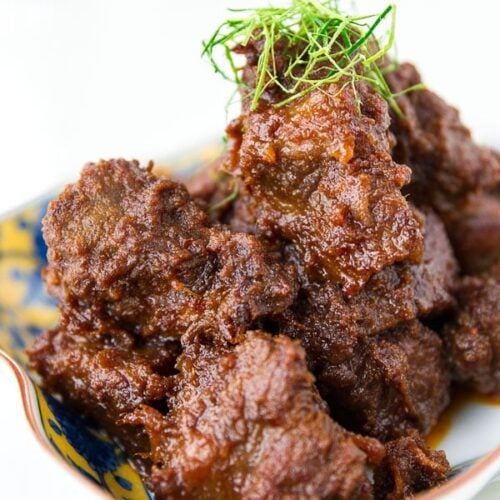 What do you think?194 Cancel reply