Perhaps one of Japan’s best-known street foods, Yakisoba (焼きそば) literally means “grilled noodles.” It’s thought to have originated from Chinese cuisine and became a popular fast-food meal in the black markets that popped up around Japan after the war. In an era when food was in short supply, and the country was busy rebuilding, the basic ingredients needed to make yakisoba, and the possibility of preparing it on large steel griddles called a teppan (鉄板), made it ideally suited for these makeshift outdoor markets.

These days, health regulations have all but obliterated outdoor food stalls, but yakisoba can still be found sizzling away in stalls everywhere from baseball stadiums to traditional matsuri (festivals). If you’ve ever been to one of these festivals in Japan, you probably remember the smell of the fruity, spicy sauce caramelizing on those giant steel griddles accompanied by the trademark clatter of the stubby metal spatulas used to stir-fry the noodles.

While most street food versions of yakisoba are mostly noodles with a few scraps of cabbage here and there, I like loading my yakisoba up with veggies (and sometimes seafood or meat), turning it into a complete meal.

Most people outside of Japan associate soba with buckwheat noodles, because soba literally means “buckwheat” in Japanese, but the word was historically used to refer to any long, thin noodle. In fact, ramen was originally known as chūkasoba (Chinese noodles).

In the case of Yakisoba, the noodles are Chinese-style alkaline noodles. In Japan, these noodles are available in pre-boiled packs specifically for this dish. Although they’re convenient, I’m not a fan of them because they’re a pain to untangle, and they tend to get overcooked and soft when you stir-fry them. Instead, I like to use fresh noodles such as ramen, or chow mein and I boil them myself. It’s an extra step, but it’s not that much more work, and the results are better.

Yakisoba is so good you’ll likely end up eating the whole batch, so if you’re concerned with such things as carbs and calories, there’s a good alternative: Shirataki Noodles. These noodles made from the corm of a Voodoo Lily are very low in carbs and have virtually no calories. Go check out my Shirataki Yakisoba Recipe for all the details on that.

In a world where people are pressed for time, most yakisoba is prepared from bottled or packaged sauces. They’re loaded with MSG and are not widely available outside of Japan, so I prefer mixing my own blend, using sauces that are available almost anywhere.

In Japan, the main component of the sauce is a fruit and vegetable sauce called chūno sōsu(sō as in soda, and su as in sue), which is often abbreviated down to sōsu. It’s a condiment that’s poured on everything from Tonkatsu to salads, and is used for seasoning dishes ranging from Hamburg Steak to Japanese Curry. Worcestershire sauce (I use Lea & Perrins) has a similar blend of spices and has the vinegary kick, but it lacks the fruity sweetness, which is why I blend it with ketchup and honey to make a close facsimile which I think tastes better than the original.

I also like to add a bit of oyster sauce to my Yakisoba sauce, which lends some incredible umami to the noodles while bringing it back just a bit towards it’s Chinese roots.

The most common type of meat used for yakisoba is thinly sliced pork belly. Not only does it add a ton of flavor to the noodles, but it also contributes some fat that helps keep the noodles from sticking together. If you have trouble finding thinly sliced pork belly in your area, American-style bacon is a good substitute; however, you’ll need to reduce the amount of sauce you add a little as the bacon can be quite salty.
If you’re not into pork, chicken or shrimp are both excellent options, and it’s also okay to just leave out the meat altogether to make vegetarian yakisoba (make sure you use a vegetarian Worcestershire sauce).

The standard trinity of vegetables for Yakisoba includes cabbage, carrots, and onions, but you can honestly use any combination of veggies you like. In our home, this is one way we use up odds and ends from the veggie drawer, and I’ve made this with everything from peppers, to snap peas, to asparagus, to kale.

Yakisoba tastes best when made on a teppan, but most of us don’t have a large high output griddle in our homes, so here’s the secret to getting that great grilled flavor at home.

The traditional teppan gives a large heated surface to work with, so cooks can constantly move the ingredients around to keep them on a hot part of the pan. This not only cooks the ingredients through quickly, retaining their vibrant color, it also allows the ingredients to take on just a bit of char, which is where that wonderful flavor comes from.

To approximate this at home, I like to use a large pan with a heavy bottom (cast iron or stainless steel both work well). The large pan gives you extra surface area to work with while using a heavy pan made of iron or steel (as opposed to aluminum) means the temperature of the pan won’t drop as quickly when you add in additional ingredients.

How to Make the Best Yakisoba

First I like to fry up the pork belly, this gives the pork a chance to brown, developing a ton of flavor, and it also allows some of the fat to render out. If you don’t use pork belly, you’ll want to increase the amount of oil you use in the pan to 2 tablespoons.

Then I give the vegetables a quick stir-fry to give them a bit of color. You don’t need to cook them through all the way here, as they’ll continue to cook after the noodles get added.

The classic toppings for yakisoba are aonori(green nori flakes) and beni shōga (red pickled ginger), but I also like to top it with some scallions sometimes, and I’ve even heard there are people who put mayonnaise on it 😱. 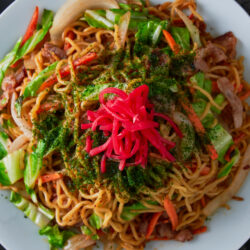 What do you think?57 Cancel reply