I’m not much of a chocolate guy. After a big restaurant meal, I’ll usually pass over chocolate desserts in favor of something light and fruity. If after reading that, you’re thinking I must be from another planet, rest assured, I’m human and I do get an occasional chocolate craving. Perhaps it’s my palette’s way of protesting all the chocolate that I pass up, but when the urge hits, it’s pushy and unrelenting like a sleazy guy in a bar.

Connoisseurs may argue that a pot de crème is a superior way of delivering chocolate into your system, but I’d like to see someone pull off a 15 minute pot de creme. Also, while this decadent chocolate pudding is far from healthy, it’s made mostly with milk, and is set with yolks and cornstarch instead of just yolks, so it’s a little less unhealthy, right? At least that’s what I tell myself as I lift spoon after spoon of this addiction inducing pudding to my mouth.

I made this using Valrhona Caraïbe (66%) chocolate and Scharffen Berger cocoa, but any high quality chocolate and cocoa will do. By using chocolate buttons, you’ll save yourself some precious time because you don’t need to chop them up first. Once made, this chocolate pudding will keep for up to a week in the fridge, and it makes great trifles with fresh raspberries or bananas. To dress it up a bit, try drizzling an equally quick raspberry coulis on top. 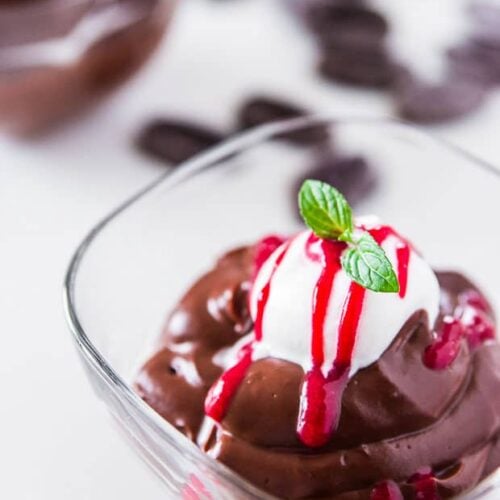