How Potato Salad ended up in Japan

Potato salad probably isn’t the first thing you think about when you’re naming off Japanese dishes, but it’s been around for at least 160 years. It’s believed to have evolved from a Russian dish called Olivier Salad, which explains why it includes a high ratio of other ingredients relative to the potatoes.

Since its introduction into Japan, potato salad has become a staple of Japanese home cooking, and it’s often served alongside fried foods like Tonkatsu and Karaage. My version has enough veggies and protein to stuff it between two slices of sandwich bread to make Potato Salad Sando (ポテトサラダサンド), which is a popular sandwich that’s often sold in convenience stores around Japan.

How to make Japanese Potato Salad

The first thing you want to do is wash and peel your potatoes. Be sure to keep them submerged in water, so they don’t discolor. Cut the potatoes into 3/4-inch cubes. They don’t have to be perfect since they’re going to get mashed up, but you want to get them to roughly the same size, so they cook through at the same rate. Put the cut potatoes into a pot of cold water.

Peel the carrots and cut them into 1/3-inch cubes. Add these in with the potatoes and then put the pot onto a stove over high heat.

When the water comes to a boil, turn down the heat to maintain a simmer and cook the potatoes until they are fall-apart tender. Slightly overcooking the potatoes is the key to a creamy potato salad, but be careful you don’t have the heat up too high, or your potatoes will fall apart in the water.

While the potatoes cook, you want to slice up your cucumbers, chop the onions, and salt them. This gets them to release excess moisture that will keep your salad from getting watery. For the onions, this also mellows out their pungency. For the cucumbers, salting them makes them crunchier.

To make the dressing, just whisk the mayonnaise, vinegar, sugar, and salt together in a large bowl.

When the potatoes are tender, drain them well and then add them to the dressing while still hot. Now you can mix this together very well. If you’ve cooked the potatoes long enough, they should mostly disintegrate into mashed potatoes, but it’s okay to have a few chunks. Be careful not to mash the carrots.

By now, your cucumbers and onions should have released a bit of water, but you want to release even more liquid by massaging them with your hand. Then you can gather them up and squeeze them well with your hands to remove as much liquid from them as possible.

Add these into the potato salad along with the ham, and then you can stir it all together until everything is evenly distributed.

The boiled eggs go on top of the potato salad to garnish it, and you can finish it off with a generous amount of freshly cracked black pepper.

Japanese potato salad has two significant differences from its Western cousins. The first is that it’s seasoned with Japanese mayonnaise, which gives it a more tart and savory taste. The second difference is that in addition to potatoes, there are many other vegetables and proteins added, which make it more colorful and add a ton of different textures to the dish.

How do you say Potato Salad in Japanese?

What if I can’t find Japanese mayonnaise?

This recipe will work with other types of mayonnaise, but you may want to increase the amount of vinegar to compensate for milder varieties of mayo.

Yes, it’s fairly easy to make a few substitutions to make this plant-based. The main thing is to substitute an egg-free Japanese style mayo, which several brands make, including Kewpie. 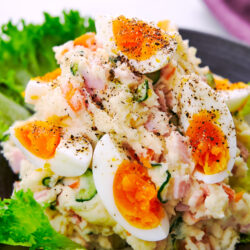