Karaage is my favorite bite-sized fried chicken and one of my favorite foods, for that matter. With flavorful and juicy chicken on the inside and a potato-chip crisp shell on the outside, it’s a popular street food loved throughout Japan.

The most common version is seasoned with a soy-sauce-based marinade, but salt (shio) Karaage is another popular variation that highlights the savory flavor of the chicken. It’s a sublimely light and refreshing dish with garlic, pepper, and a squeeze of lemon juice, perfect for summer.

There are a few tricks to ensure your chicken is packed with juicy umami and ultra-crisp, so keep reading to learn how to make the best Karaage.

How to Make Shio Karaage

To make the Shio Karaage Marinade, grate the ginger into a medium bowl and add the sake, salt, and black pepper. Stir the mixture together until the salt is fully dissolved.

To prepare the chicken, trim off any flaps of excess fat or tough connective tissue and then follow the natural partitions in the meat to cut the chicken into strips that are about one and a half inches in width.

Now you want to cut the chicken into bite-sized pieces about the same size as a golf ball. Since some areas of chicken will be thinner than others, you’ll need to cut the strips at different intervals to end up with pieces of the same weight. This is important because the chicken will be balled up before deep frying it, and smaller pieces will cook a lot faster than bigger pieces.

Transfer the chicken pieces into the bowl with the marinade and stir to coat each piece evenly. Cover the bowl and let the meat marinate for at least one hour. Ideally, you want to leave the chicken to marinate overnight.

To fry up the Karaage, add one to two inches of oil to a heavy pot with high sides such as a Dutch oven. Of course, two inches of oil would be better, but I know how expensive frying oil is these days. Preheat the oil to 340°F (170°C), and while you’re waiting for that, line a wire rack with several layers of paper towels.

When the oil is up to temperature, add the potato starch to a small bowl and roll each piece of chicken in the starch to give it an even coating. Next, use your fingers to shape the chicken into a ball with the skin on the outside, and carefully lower each piece into the oil.

Unlike chicken seasoned with soy sauce, this Karaage won’t turn golden brown, so the color is not a good way to judge when it’s done. The chicken should take about five minutes to cook through, and you’ll want to flip them periodically once the coating sets to ensure they cook through evenly. The easiest way to tell when the chicken is done is to remove a piece and test the internal temperature with an instant-read thermometer (it should read 160°F or 71°C), but you can also cut it in half to make sure the juices are no longer pink.

Transfer the chicken to the prepared rack to drain as they cook.

Serve the Shio Karaage immediately with a few wedges of lemon for squeezing.

What is Shio Karaage?

Shio Karaage (塩から揚げ) is a variety of Japanese fried chicken that’s seasoned with salt (shio) instead of the usual soy sauce. This gives it a lighter color and flavor that allows the flavor of the chicken to shine.

How do you pronounce Shio Karaage?

Shio Karaage is a 6-syllable name pronounced as follows (read the italicized parts).

shi like sheet
o like order
ka like copy
ra like the “ra” sound does not exist in the English language, and the best way to make it is to say the word “romp” with the tip of your tongue at the front of your mouth.
a like aardvark
ge like get

How to make karaage crispy?

There are a few tricks to making the crispiest karaage possible. The first is to use skin-on chicken. This is because the skin will render its fat as it fries and becomes crackling crisp. The second is to coat the chicken in potato starch, which creates a delicate crispy shell compared to flour or other types of starch. Finally, if you want the coating to stay crisp longer, you can double fry the Karaage. Of course, the tradeoff here is that the chicken will be much less juicy than with a single fry.

Can I make karaage in an air fryer?

It will work in the sense that it will cook the chicken, but it won’t crisp the starch in the same way as deep-frying it. Air fryers are essentially small convection ovens and work better with foods coated with something that’s already crispy, like breadcrumbs. 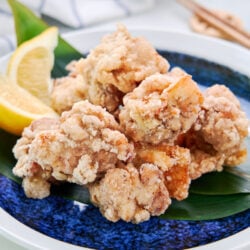