What is Burnt Basque Cheesecake

Burnt cheesecake might sound more like a mistake than a crave-worthy treat, but names can be deceiving and this crustless cake is an effortless dessert that yields an improbably delicious cake. With a gorgeously “burnt” top and a rich custardy center, this cheesecake from the Basque region of Spain has become a favorite in our household.

Why This Basque Cheesecake Recipe Works

Although the name makes it sound like it has a long history, Basque Cheesecake was created in 1990 by chef Santiago Rivera of La Viña in San Sebastian, Spain. According to interviews, Rivera was looking to add a dessert menu to his Pintxos restaurant after taking it over from his parents and settled on a custardy cheesecake.

What goes into Basque Cheesecake?

The original recipe from La Viña contains just 5 ingredients: Cream cheese, heavy cream, sugar, eggs, and flour. I personally like to add some vanilla bean paste to the batter, but you can leave it out if you want something closer to the original. I also add a pinch of salt, depending on the type of cream cheese I use. 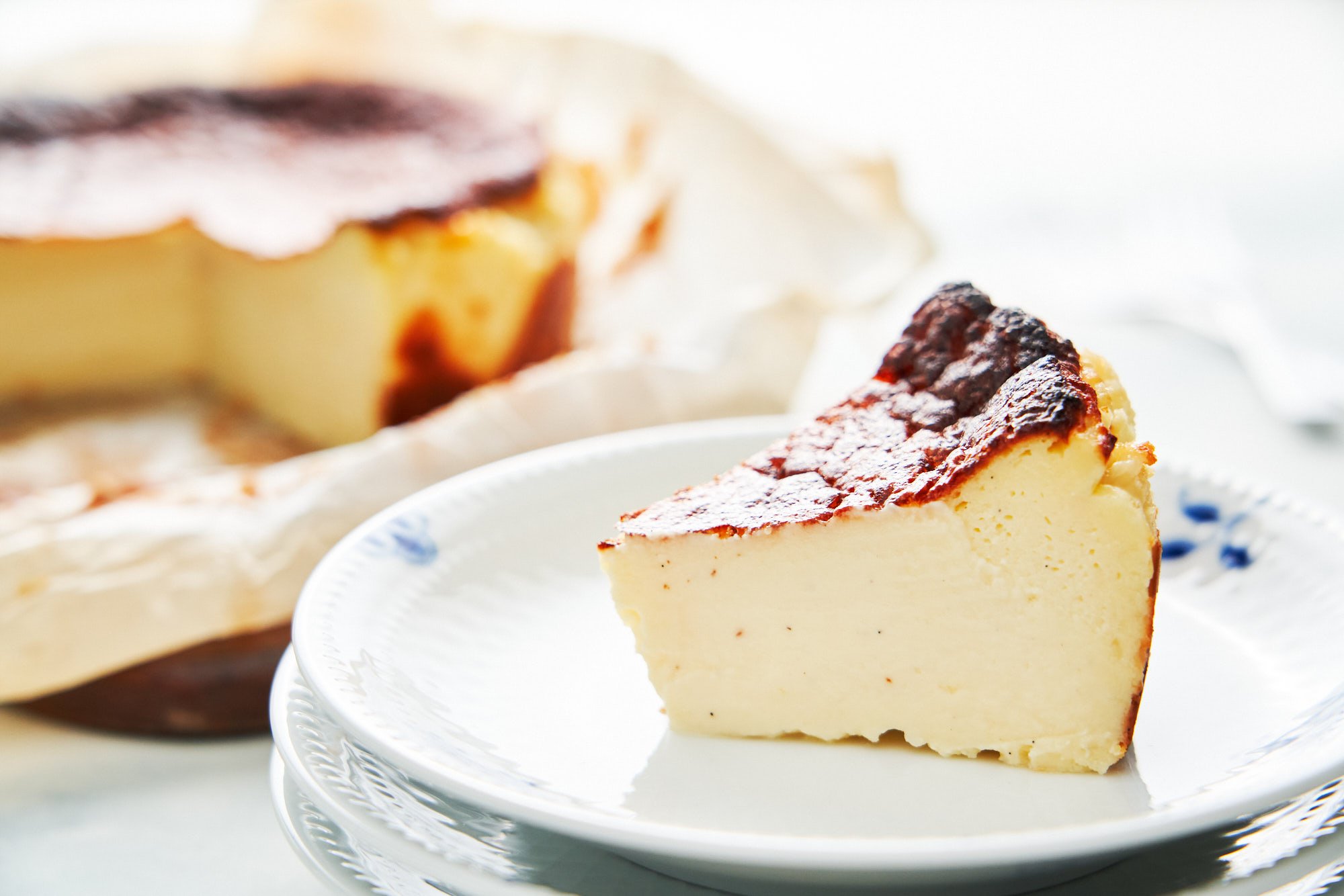 What kind of cream cheese should I use for Basque Cheesecake?

It’s widely thought that Rivera uses Philadelphia, but in 1990, when this cake was created, it’s more likely that he was using a Spanish brand of cream cheese such as San Millan. I’ve never tasted San Millan, so I can’t say what the differences are in taste, but what I can say from comparing nutrition labels, is that San Millan has two and a half times the amount of salt as Philly, and it contains about 40% less fat.
All that being said, I’ve made this using Philadelphia as well as Kiri (French brand), they’re both delicious (though I think I prefer using Kiri). If you do go with Philadelphia, I recommend adding a pinch of salt.

Do I have to use heavy cream?

The cream is added for 2 reasons. The first is that it’s a liquid which helps this turn into a batter you can pour. The second is that it adds fat, which makes the cheesecake more rich and creamy. “Heavy cream” is the designation in the US for cream that includes more than 36% butterfat. I personally used a cream that has 47% fat, which makes for a very rich custardy cake. If you want a lighter cake, you can use a lower butterfat cream. One thing to be careful of are creams that have thickeners like gums or gelatin. Although I haven’t tried it, I have received a few reports of this recipe not working out when prepared with such products.

Can I use all-purpose flour?

All purpose flour has a higher gluten content than cake flour. Gluten is a protein that forms long chains when hydrated which is what gives bread and noodles their chewy texture. For cakes you don’t want them to get chewy, which is why cake flour is used. That being said, Basque Cheesecake uses a small enough amount of flour that the type you use probably won’t make that big of a difference.

Is the cheesecake really burnt?

By the subjective standards of cheesecake, Basque Cheesecake is burnt, but it is not cooked so long that the top turns to carbon. There are two non-enzymatic browning reactions happening here. The first is the caramelization of the sugar, which creates aromatic compounds such as Diacetyl and Maltol, which give the top the flavor of caramel. The second is Maillard browning, which is a reaction between the proteins in the cream cheese and sugars, which not only creates additional flavor compounds; it also creates the taste of umami. This is why the seemingly burnt layer on top tastes so good. 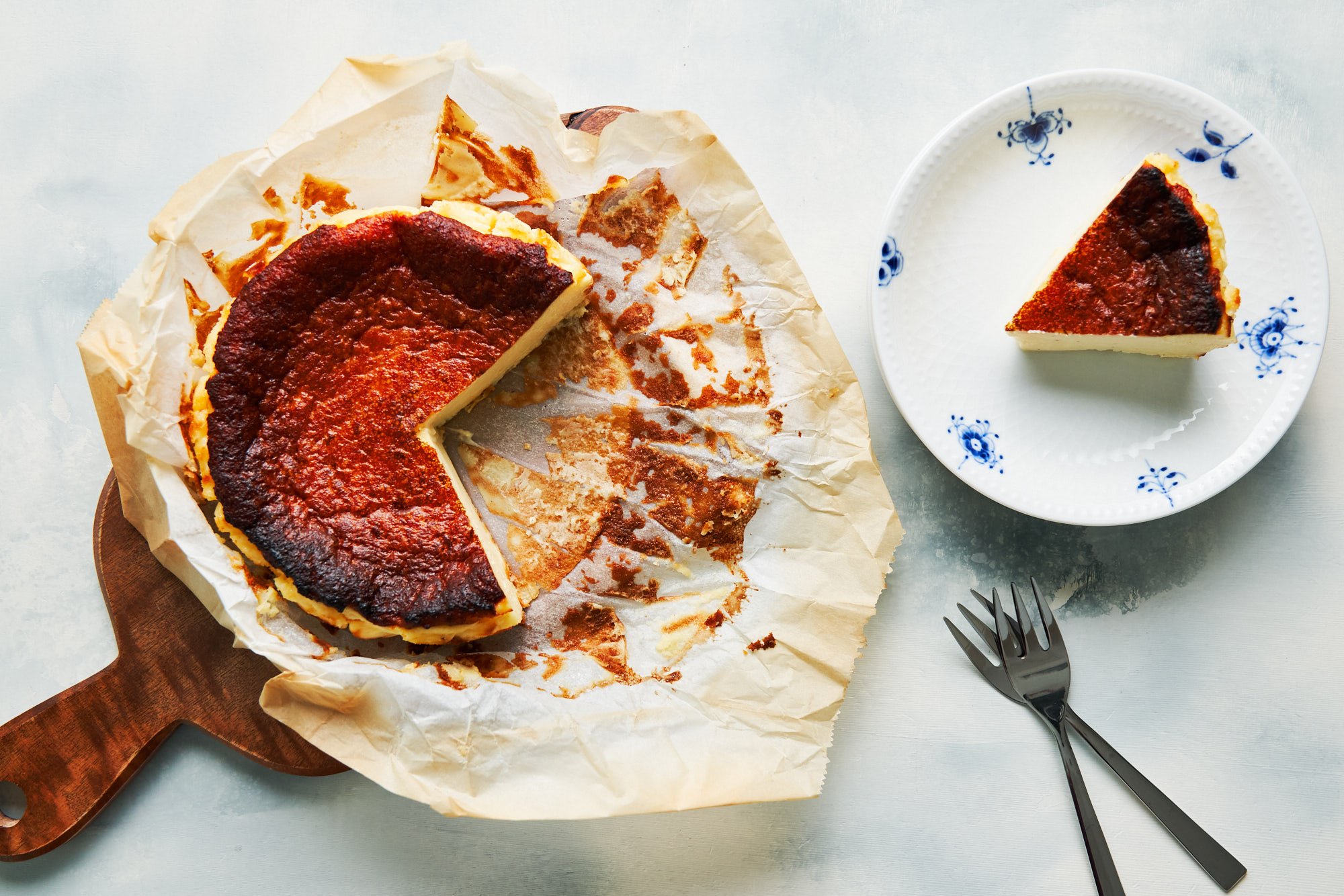 What is the proper mixing technique for Basque Cheesecake?

Every recipe seems to have their own way of combing the ingredients, but I’ve found that the easiest way is to throw all the ingredients into a blender and spin it. The only slight drawback of this technique is that it introduces air bubbles to the mixture, which is why I usually let the mixture sit for about 20 minutes before I pour it into the pan. You can also do this with a food processor, stand mixer with a paddle attachment, stick blender, or the old fashioned way with a whisk and a mixing bowl.

What temperature do I bake Basque Cheesecake at?

Time and temperature are the most important parts of this recipe, but unfortunately, the answer isn’t clear cut. The goal here is to get a burnt hue that’s just shy of carbon black before the center of the cake is fully set. This is what creates that magical contrast of the cake-like sides, caramelized top, and custardy center. If the temperature is too low, the cake fully cooks before the top takes on enough color, and if the temperature is too high, the top will turn to carbon before the center has a chance to thicken to the desired consistency.
In my convection oven, I bake it at 230 degrees C (about 450 F) for 22 minutes. Unless you’ve had yours recently calibrated, the thermostat on most ovens is off by a significant margin. Additionally, the airflow passing through the oven has an impact on how quickly the cake cooks. If you have a convection oven, you can use my temperature and timing as a starting point, but you may need to make some adjustments in subsequent batches, depending on how it turns out. If the cake is too firm in the center, turn up the heat and bake it for a shorter time. If the cake is too runny in the center, turn down the heat and bake it for a longer time.
If you don’t have a convection oven (i.e., there’s no fan moving the air around), I’d recommend going with the high-temperature something closer to 250 C (480 F). 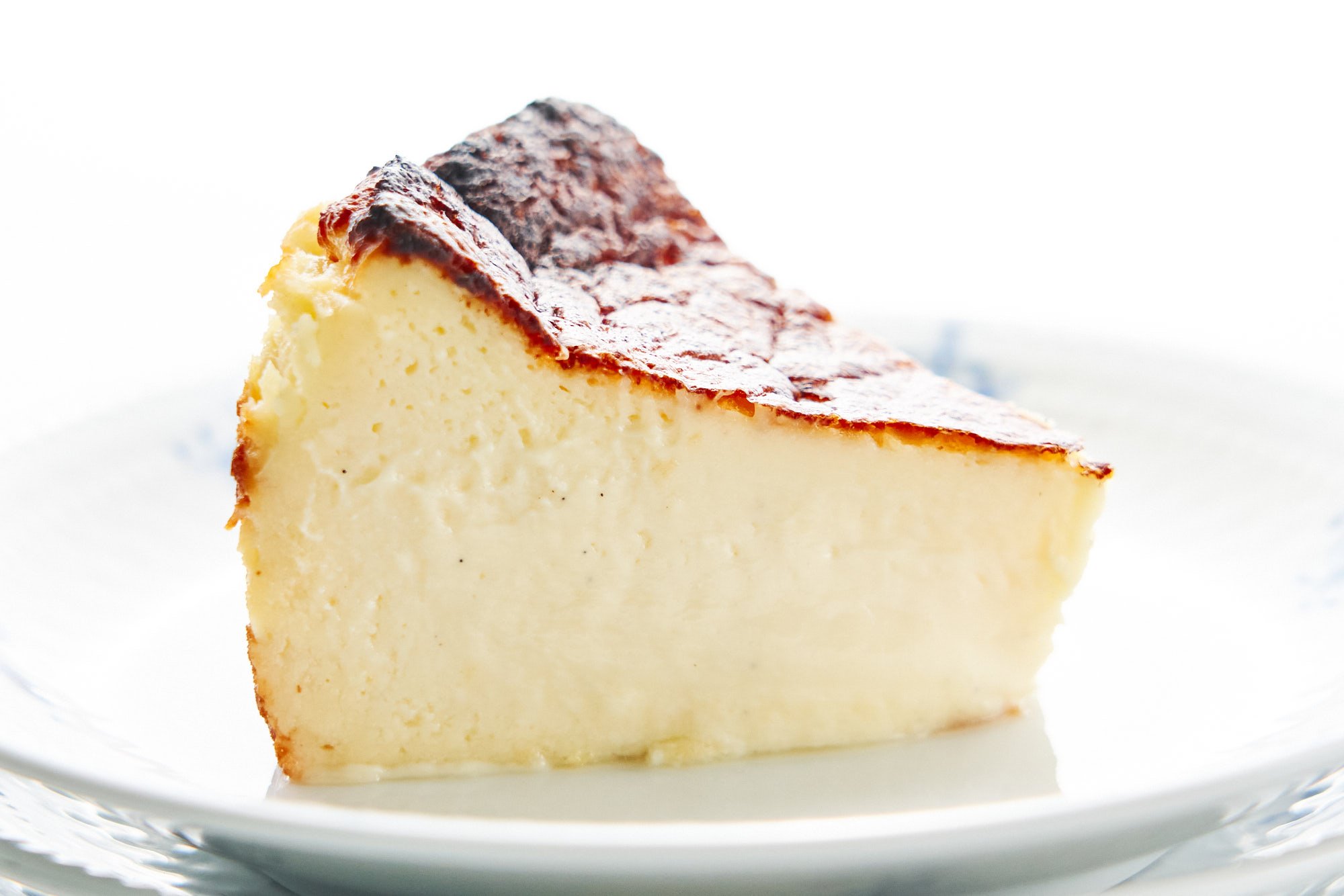 How long do I bake Basque Cheesecake?

The time for baking this burnt cheesecake is tied to your oven setup, so the goal should be to get a very dark brown top, that’s just shy of being carbon black on top. In my convection oven set to 230 C, this took 22 minutes, but the time will vary, depending on your setup. Read the section above for more details.

Can I make Basque Cheesecake ahead of time?

Yes! While it’s delicious served hot, if you’ve baked it for the right amount of time, the center will still be runny when warm, which means you’ll need to eat it straight out of the pan with a spoon. By covering and refrigerating the cake overnight, it gives the center a chance to firm up enough so that you can slice it.

What size cake pan should I use for Basque Cheesecake?

I’m using a 6-inch x 2.5-inch cake pan with a removable bottom, but a similarly sized springform pan will work as well. There are a couple reasons for this. The first is that a small deeper pan makes it easier to burn the top without overcooking the center. The second reason is that for the size of parchment paper I have, anything wider would require two overlapping sheets of parchment paper, which would be prone to leaking.
The removable bottom is not necessary, but I find it makes it much easier to get the parchment paper molded to the shape of the pan because you can use the bottom to press the paper into the pan. Then, after you have the sides of the paper creased to fit the pan, you can put the bottom back onto the pan, and the paper should fit perfectly into the pan.
My pan holds a volume of about 70 cubic inches. If you use a pan that’s a larger diameter, it will hold more volume, so you will end up with a thiner cheesecake that cooks through faster. Since it’s still going to take the same amount of time to brown the top, you will need to increase the temperature of the oven to make it brown before the cheesecake gets overcooked. If you are using an 8-inch pan or larger, I recommend increasing the amount of ingredients, otherwise the cheesecake will be too thin.

By the way, the pan I used is not available in the US, but a reader experimented with a few brands of pans and they found the Nordicware 6″ Cheesecake Pan worked best.

Can I use a square/rectangular/oval/etc shaped pan?

You’ll need to adjust your parchment paper strategy for the shape of the pan you’re using, but as long as the volume of the pan is roughly 70 cubic inches, and you’re able to get a thickness of about 2-inches when you pour the batter in, it should work. That being said, I’ve never tested this with other pan-shapes, so you will likely need to do some testing with temperature and time to find the right combination for your setup.

Why did my cheesecake fall?

The short answer is that this is what is supposed to happen and it means you did it right. When you bake a cake the oven heats up the water in the batter and it turns to steam. The steam creates pockets in the batter and as it goes from raw to cooked, the proteins solidify and form a web around the pockets of steam so that even after the cake has cooled, it is fluffy. Basque Burnt Cheesecake is deliberately undercooked in the center to give it its smooth creamy texture. Since the proteins have not set, as soon as the heat is gone, the steam escapes and the cake will sink in the center. The sides remain high because they’ve been fully cooked.

Why did my cheesecake crack in the center?

Cracking is caused by a difference in moisture between one part of the cake and the other. It is normal for burnt cheesecake to crack around the edges where the batter has formed a crust as it will be fully cooked, whereas the center is still undercooked. If your cheesecake cracked in the center, it means it was overcooked. In this case, you need to raise the temperature of your oven so that the top browns faster and bake it for less time (so the center stays more rare). 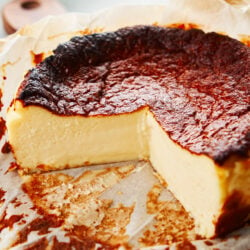 What do you think?554 Cancel reply